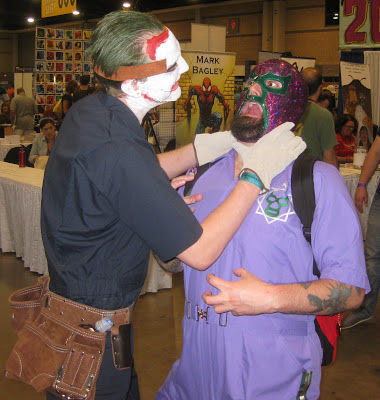 My gosh, I have my will to live back and I am just inspired to do everything that I haven’t been doing for the past three weeks. Like writing.
My illness broke yesterday and I realized that I must have actually been sick since we were on vacation; possibly even before that. I’ve had no interest in doing much of anything – toys that needed reviewing were piling up, I was admittedly lax in my preparation for and execution of our HeroesCon trip, and I have done next to nothing to get ready for the big Needless Things event at Odin’s Cosmic Bookshelf on July 13th.
I had attributed my lethargy and malaise to my work situation – and that certainly played a part – but looking back on the past month I realize that my health has been poor for a good bit of that time. Just before we left for North Carolina I had one night of a sore throat. A peculiar needle-like pain that had me coughing intermittently, but was pretty much gone the next day. I figured I had swallowed a dog hair or something. But I wasn’t one hundred percent the whole trip.

Posted by Phantom Troublemaker at 8:03:00 PM

Email ThisBlogThis!Share to TwitterShare to FacebookShare to Pinterest
Labels: life the universe and everything, tales from the troublemaker