I first discovered the artist known as Merrypranxter a few years ago at Christmas. I was looking for a background for Needless Things, but no mere scene of reindeer cavorting would do. I needed something that not only celebrated the holidays, but stated “I am a massive dork” as well. So I Googled “Christmas Dalek” because sometimes that sort of weirdness actually works out. Sure enough, I found this: 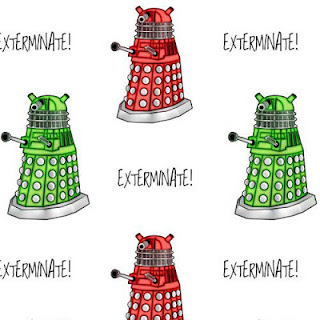 Now, this was 2009 and Doctor Who was not what it is now. I wouldn’t be surprised to walk into Walmart and find Dalek wrapping paper this year, but four years ago Who-themed merchandise was still a surprise, let alone something as gleefully absurd as gift wrap featuring the deadliest species in the universe.
I was still new to the idea of internet-oriented production and totally unfamiliar with the idea of people creating things like this and selling them online. I just knew it would make a rad background. So I saved the image and typed the link into the bottom, then used it as my background. It didn’t even occur to me to e-mail the artist to say their creation was awesome and maybe do an interview or something. I didn’t even consider that I could conceivably get some more traffic for the site by communicating with an artist. I just thought Christmas Daleks were cool.

I have no idea how I ended up connected to Merrypranxter through the social networks. I vaguely remember maybe talking to her at Dragon*Con while she was in her awesome Zardoz Exterminator costume, but I honestly can’t say for sure. Many things about Dragon*Cons are a bit fuzzy. I do remember at one point thinking, “Oh, shit! That’s the Christmas Dalek girl!”, but I don’t know if it was in response to her Twitter handle or what.
Maybe I need to drink less.
Anyway, I contacted the lady to see if she’d be interested in doing a Q&A and putting over some of her stuff. She was and here it is:

1) What are your top geek passions?
A) My first & greatest love will always be Star Trek. I remember the first time i watched it. I was in the 2nd grade, flipping channels, and suddenly i saw the most beautiful face i'd ever seen. It was Wesley Crusher. (Yes. Wesley Crusher. I know.)
I was hooked from day 1. I got my first Starfleet insignia pins for my 6th grade birthday. I read all the books, bought all the schematics.
I also love to cosplay. I only really ever get to go to DragonCon, but it is a tradition! I'm no Yaya Han by any means, but i have so much fun with it.
2) What was your favorite toy when you were a kid?
A) I never really had a favorite toy. I was that kid out jumping on the trampoline, or catching frogs & lizards in the yard. I made puppets & put on puppet shows, sewed handmade dolls, made clothes for my dolls out of old socks. That's what i did for fun as a kid.
3) What is one album everybody should own?
A) Weird Al Yankovic's Food Album. It's a classic. If you don't like Weird Al i don't want to be your friend.
4) Who is your favorite wrestler and why?
A) Lol! i know nothing about wrestling. (Sorry!)
5) When and how did you discover you had a talent for creating?
A) It's just something i've always done. I was always doodling in class, or making something. Like i said, that's what i've always done for fun.

6) If you could pursue any project, what would it be?
A) I wish i could make money just drawing and making anything i want.
7) If you could live in any city in the world, where would it be and why?
A) As much crap as i give my hometown of Anniston, Alabama…. I'd have to say i'm pretty happy here. I mean we are one of the most polluted cities in the country… and everyone is conservative and there aren't a lot of options as far as places to shop or things to do… but everyone i love is here. All of my friends are here. My friends & family make it home… If i moved anywhere else, they wouldn't be there. And that would just suck. I love them all & they are each special in their own way and totally irreplaceable. If i had to move i'd go to Atlanta. It's close enough to drive back and forth for fun times, and is where we here in Anniston go to shop and do things anyways. It just makes sense.

the gun is good by ~merrypranxter on deviantART
8) What's a favorite con memory?
A) oh god, just one?
Picture it. DragonCon 2012. Sunday afternoon. I'm hungover, drinking a little hair of the dog… dressed as a Zardoz exterminator. My buddy Dave & i decide to hit up the autograph room. I put my mask on, grab my airsoft peace bound shotgun & in we go. Eventually i decide i just wanna catch a glimpse of the TNG cast lineup, bc the lines are long & i don't feel like waiting. So i edge up to a column & have a clear view of Jonathan Frakes. So i'm watching him interact with a fan when he sees me standing there, & i shit you not he PUSHES the fan he's talking to to the side & totally smiles & starts giving me the "creepy Riker" eyes. So i get giddy and blow him a kiss through my mask & he winks & i pick up my mask & wink back. He blows ME a kiss & then my head explodes & i run away giggling. Dave saw the whole thing. I have a witness.
Also 2011, Thursday night before con begins, I'm dressed as Pris from Blade Runner. My buddy is dressed as Jesus. We've both been drinking & suddenly some guy RUNS INTO ME in the lobby by the Vortex. And I look up & i'm like "Dude. YOU'RE WIL WHEATON." It was Wil Wheaton. He steadied me back upright & said "and YOU'RE PRIS!" and then just kept running. Pretty much made my whole weekend that year.
9) Which actor do you feel like you could sit and watch for hours no matter what they were doing and why?
A) Patrick Stewart. Because Patrick Stewart.
But really… i think the hundreds upon hundreds of hours i've spent watching TNG proves that i can't get sick of him. And Deputy Director Bullock in American Dad?? Pretty much the best part of the whole show. He's so sexy & rugged & british & distinguished.. and that voice.. and that bald head. I love bald guys. He's probably why. I'd pretty much pay money to watch this man read the back of a cereal box.
10) What inspires you to do what you do?
A) Anything that happens to inspire me. Sometimes it's a funny line from my favorite movie. Sometimes it's something obscure i feel hasn't gotten enough attention. Sometimes it's a person. Sometimes it's a feeling. It really just depends.

11) What is something you cannot wait to see or have more of?
A) Anything I like. I suck at moderation.
12) Is there a movie that should never be remade and if so which one?
A) There are a lot of them. I wish Hollywood would start writing NEW GOOD MOVIES again and leave my childhood alone. But if i have to pick i'd have to say (The message got cut off here and I didn't have time to contact the lady again before I posted. A message has been sent, though. I'll fix it when I can. Until then I'm gonna guess she said Zardoz.)

13) Closer – what are your recent projects and where can people see them?
A) I have my t shirts and other things for sale in my shop on redbubble: http://www.redbubble.com/people/merrypranxter
Patterns & other prints are here: http://society6.com/merrypranxter
My Deviant art is http://merrypranxter.deviantart.com/
Go check out this lady’s stuff and buy some art. She just did that Star Trek piece and I really dig it. And I still need some Dalek gift wrap.
-Phantom