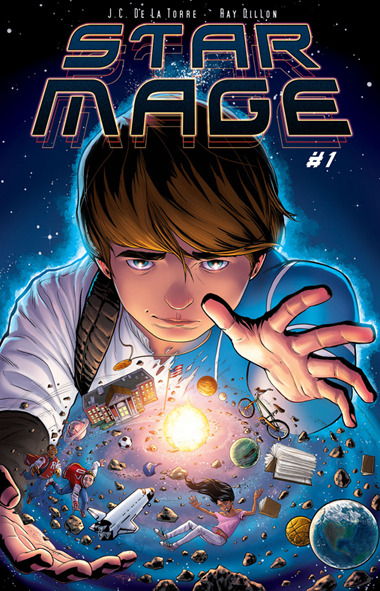 Thanks to my work with the ESO Network I have gotten to know a lot of really cool and interesting people. From Bobby and the Mikes to Dr. Geek to Gary Mitchel and Joe Crowe; my life has definitely been enriched by all of the new connections I’ve made. All of those folks have added a little something to my experiences and outlook and it has been one of the most rewarding times of my life.
Two of the people I have gotten to know a bit are Rita and Jason De la Torre. They host a podcast together – which is just about the sweetest thing I can think of – and are enthusiastic fans and cosplayers. Every time I have been around them they have brought a fun, positive energy to whatever was going on, which is why their podcast – Transmissions From Atlantis – works so well.
Another project they’ve got going on is a comic book called Star Mage. Like many other folks they are utilizing Kickstarter to get the project going. You can check the project out here:
Star Mage Kickstarter
I’m not gonna lie – just the title “Star Mage” gets me excited. How has that not been used before? It’s awesome. Anyway, here’s Jason to tell you all about it:

1) What are your top geek passions?

A) Doctor Who, Ancient Aliens and Atlantis. I began with Doctor Who during the Tom Baker era but lost track after it went off the air. Since we re-discovered it about three years ago - we've gone from fans to fanatics.

Ancient Aliens - I've always been intrigued by ancient alien theory. Now, some of it is definitely out there and farfetched - but some of it is plausible. I often ask myself what is more believable - an invisible man in the sky gave man intelligence and dominion over the world or ancient aliens did some DNA experiments with primates? I don't know the answer to that other than one is taken on faith while the other there's a demand for evidence.

Atlantis - Every culture has a flood story and I truly believe there was an advanced sea faring culture that suffered a terrible calamity.
2) What was your favorite toy when you were a kid?
A) Voltron - I had all five lions and I was so proud.
3) What is one album everybody should own?
A) The Beatles White Album with Ken Spivey Band's the Universe Yields a close second.
4) Who is your favorite wrestler and why?
A) I don't follow wrestling much anymore but when I did Sting was my favorite wrestler during his Crow phase. I was really into Brandon Lee and the Crow at the time and I was a Sting mark.
5) When and how did you decide to start podcasting?
A) My wife and I are huge Sci-Fi geeks and we are always having debates (sometimes heated). We began thinking it would make for good radio and when we went to TimeGate in 2012 we attended ESO Network Mike Faber's podcasting panel. We soaked up everything we could learn and made friends out of the ESO crew...the next week we did our first podcast and on June 4th we had our one year anniversary. 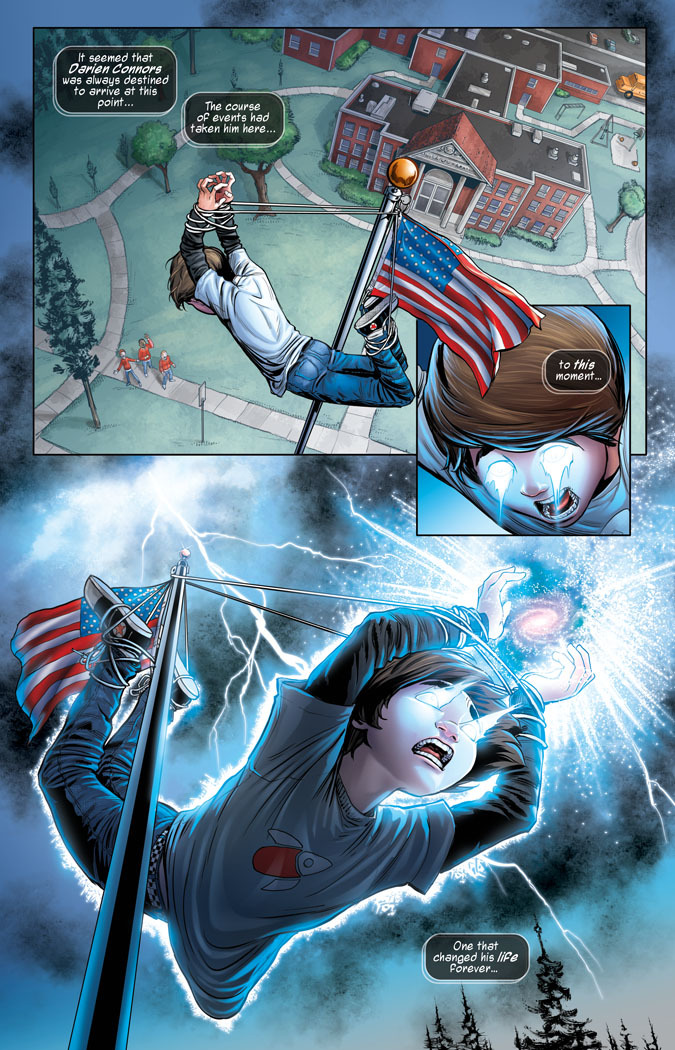 6) How did Star Mage come about?
A) So Star Mage came to me shortly after the end of the Harry Potter film series. Like so many Potterheads, I found a deep sense of loss that there wasn't going to be any more stories of Harry and his crew. The universe was over. I'm not a fan fiction kind of guy. While I respect those who do it, for me I like to challenge myself to come up with new characters. I want to play in my own backyard, not in someone else's.

I also didn't want a cheap ripoff of JK Rowling's world, either. I wanted something unique. Quickly, a crazy idea began to form - Harry Potter in Space. Before I knew it I had my hero - Darien Connors (a name I took from the child we never had) - I had my villain - Orasmas.

And the story built from there. Nearly every magical story bases their spells and mythology on ancient Latin. I wanted something different, so I went to the oldest language known to man - Sumerian. I found a rudimentary glossary of terms and spells that had elements of Sumerian, Akkadian and other dead languages and created the language of Eridu.

From there, I created the mythology of the Sarru Kishpu - the Kings of Sorcery and it all started coming together.

The world's first experience with Darien was a short novella I wrote and published in e-book called Darien Connors and the Necromancy of Eridu. It developed a small following and I expected to continue the series but life prevented me from doing that. Eventually the fans found other passions and the series was dead.

The visual medium of comics began calling to me. I always felt that Darien's story would be better seen than read. I decided to retire the novella and focus my efforts on bringing Darien to comics. I teamed with a great artist named Ray Dillon who basically taught me the ropes of comic scriptwriting. He said I had a natural gift for it and I loved the challenge of putting it together. My passion for storytelling exploded like it did so many years ago when I began my career with Ancient Rising.

Ray and I decided on the name Star Mage - short, catchy and descriptive of the subject matter and we began a year and a half odyssey bringing it to fruition.
7) What’s your dream scenario five years from now?
A) We'll be head long into our fourth series of Star Mage, Transmissions From Atlantis Comics will be an indie power and Star Mage - The Movie will be this year's summer blockbuster.
8) What's a favorite con memory?
A) John Barrowman. At Dragon Con last year we met Barrowman at the celebrity row and he was great. But to our shock and surprise, later in the week we got into an elevator and there was Barrowman with his partner. I noticed immediately and tried to let my wife Rita know (she was in her own world, as usual). I was trying to play it cool but as she tells it - I had a weird look on my face like I was constipated or something. Finally, she turns around and shouts, "Oh my God IT'S YOU!" Barrowman just smiled and nodded. The elevator doors opened and it was our stop, we begin to get out and I say, "I knew it was you from the beginning - I don't know what that means," to which he says, "You neeever knoooow!"
9) Which actor do you feel like you could sit and watch for hours no matter what they were doing and why?
A) Sean Connery. I even liked him in Zardoz -where he wore nothing but a nutslinger. (Note: That’s two Zardoz-centric Q&As in a row. This means something.) Wow, that sounded a lot weirder than I intended. Connery is a tremendous actor and commands the screen every time he appears. He also is a sci-fi icon. Who else can be a Scot playing a Spanish immortal? Who can be a Russian captain with a Scottish accent? Sir Sean, that's who. Why? Fug you, that's why.
10) What inspires you to do what you do?
A) Money. Lots and lots of it. No just kidding, I just like to tell stories. I have all these crazy thoughts in my head. I have to let them through my pen or keyboard or they'll just drive me insane. Of course, my wife would tell you it's too late.
11) What is something you cannot wait to see or have more of?
A) Game of Thrones. I am a rabid fan of the television series and to a lesser extent the books. I knew the red wedding was coming this past season and we tried to warn our listeners of the TFA podcast that it was coming. I guess they didn't listen...I'll admit, even though we knew it was coming - when it happened it was still pretty damned shocking.
12) Is there a movie that should never be remade and if so which one?
A) Highlander. Look, I love the Highlander universe. I think the original movie is a masterpiece. Christoph Lambert was excellent as Connor MacLeod (even though a Frenchman trying to pull off a Scottish accent is laughable), Sean Connery...was Sean Connery and Clancy Brown's Kurgan was perhaps the greatest movie villain not named Darth Vader or Khan.

I love the story of the immortals and the game. I thought it was perfectly executed by Adrian Paul as Duncan MacLeod in Highlander - the Series.

But the franchise has run its course. When I heard Ryan Reynolds was attached to be Connor MacLeod in a Highlander Reboot I nearly lost my shit. That must never be allowed to happen. Who can play the Kurgan better than Brown? Who can beat Connery's Ramirez? It's ridiculous.

I was so happy to hear the director and Reynolds dropped out. Maybe this absolutely terrible idea will go into the cul de sac of hell (thank you Scott Vigue), never to return. 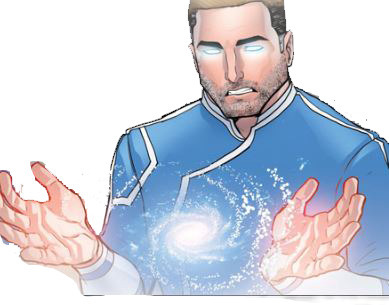 13) Closer – how can we make Star Mage happen?
A) Easy, pledge to our Kickstarter campaign here: http://www.kickstarter.com/projects/1954568853/star-mage/
We believe this project is going to rock the comics world. It’s going to be special and I'm trying to infuse as much story and background as this medium will allow while still keeping the pacing and action coming. We're happy with what we've done so far and we think the best is yet to come. Star Mage Darien Connors is the key in a war between magical alien races. Join him as he discovers his secret legacy and untapped powers.

What I’ve seen so far of Star Mage has me excited and I know the ideas and enthusiasm behind the project are going to give us a fun, entertaining franchise. Go check it out and see if you’ve got a few bucks to pitch in.
-Phantom

Posted by Phantom Troublemaker at 4:12:00 PM