Sunday
I woke up right on time Sunday morning. I had plenty of time to shower, take the bags I didn’t need down to the car, and have a morning snack. I ate the junk out of the TimeGate gift bags because I didn’t know where the con suite was and I didn’t feel like paying whatever the Holiday Inn Chambodia charges for runny eggs and toast. So after a meal of BBQ Lays, peanut butter and Cheez™ crackers, and Cool Ranch Doritos I realized I was going to have the worst breath ever. I had foolishly brushed my teeth before eating and had packed up my toothbrush. Thankfully I had some industrial-strength Crest mouthwash in my backpack, so I drowned my mouth in that and swished for about five minutes. After that I basically couldn’t feel my mouth, so I figured it must be sterilized.
I headed down to the ESO table to try some last minute selling. Friend of the ESO Network Nicole was there and we conversed a bit before I made my way across the hall to obtain my personal Holy Grails of TimeGate 2013. I had brought the blue “Real Time” Sixth Doctor figure with me to get signed and of course had to have a picture with Colin Baker. I had been too busy on Saturday, so this was my last opportunity.

When I got to the little room where they were storing the Time Lord he looked up and said, “Oh, it’s you again,” with a smile. Two other dudes were in there finishing up their business and Mr. Baker told one of them he wanted some entertainment and to say something nasty to me. I grinned and said to go ahead, it was cool – we should put on a show for the Doctor. The guy was clearly uncomfortable. Not in a horrible way, but in a, “Why are you asking me to do this, Mr. Celebrity?” kind of way. I gave him a pat on the arm and laughed it off, then turned to conduct my business.
There was one price for having something signed, but for a donation to a charity Colin Baker was sponsoring you could also take a picture with your own device. This was perfect, as it meant I wouldn’t have to stay too late to get my picture with Sawbones Hex. I handed my figure to the man and he asked if I wanted it signed to anybody. I told him “Phantom Troublemaker” and he made the same face that all of the famous people do. I laughed and said, “Yeah, I’ve seen that look plenty of times.” He smiled and signed, not requiring the spelling assistance that many celebrities do.
Then it was picture time. I asked a nearby fan if he could do me a favor and handed him my camera. As Colin stood, he said, “Wait – should we do a wrestling hold?” and I said, “Of course we should do a wrestling hold!”
I went for a half-assed-collar-and-elbow tie-up. I didn’t want to actually lace knuckles with the man and the pose still had to be photo-friendly. So aside from our aggressive poses and facial expressions it kind of looks more like we’re dancing. But it was still about the best thing ever:

The fact that the Doctor had volunteered for it was so awesome. And then he double-awesomed me by suggesting we should get one with a regular pose as well.
I thanked him profusely for being at TimeGate and went on my way. What an extraordinarily pleasant man Colin Baker is. Also, please note that he was wearing a purple shirt in my honor. Okay, maybe not in my honor, but how perfect is that?
After that I ran over to the Vendor Room to see if there were any deals and take some pictures: 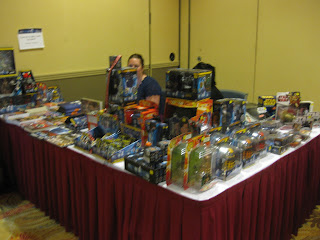 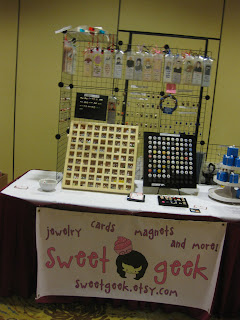 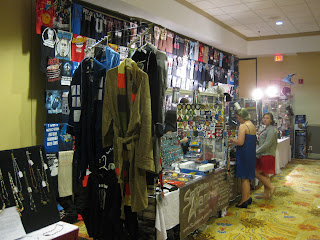 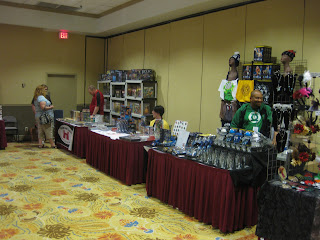 As you can see, the Vendor Room was somewhat underwhelming. There was the same massively overpriced toy dealer from last year, four or five jewelry tables, a game dealer, and a couple of other things. There was also an artist named Hashim Clark who was very cool and who should be turning up here in a Q&A sooner or later.
I’d say the vendors need more room next year, and I’m not sure where they’re going to find it. I’d hate to think that TimeGate won’t be in the Holiday Inn Chambodia, but we need more space. Grated, this year we had a Doctor and it is the 50th Anniversary, but I think the con will only get bigger. Next year is the 20th Anniversary of Stargate SG-1 and I bet they’re already hard at work on some special guests and possibly even another Doctor. Time will tell.

I stuck around the table for a whole and talked some more with Director Faber. All of the people we had seen and met over the weekend seemed to turn up at some point to say goodbye. I told Director Faber the true story of Saturday night – one you will never hear from me unless you ask in person – and it took about thirty minutes to do so because people who did not need to hear this story kept walking up.

Lieutenant Moxie showed up, looking just as bright and happy as ever. I told her she did an outstanding job at the Masquerade and I was really impressed with how she had handled everybody.
And that was pretty much that. I told everybody goodbye, loaded my still-full merch box back into the car, and headed home.
All in all I have to say it was a great TimeGate. Probably my favorite convention so far. If you’ve never been and are any kind of sci-fi fan, you have to go. It’s such a good crowd of folks and everybody is so supportive of everybody else’s dorkery. There is no snark whatsoever. It’s fun and laid back, but at night you can still party if you want.
Oh, and hopefully Doctor Q will be back next year.

Email ThisBlogThis!Share to TwitterShare to FacebookShare to Pinterest
Labels: conventions, doctor who, tales from the troublemaker, TimeGate