Vintage Troublemaker: The Monday Night Wars II (or not) 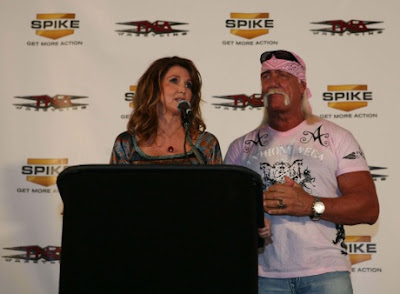 I’m having to pad things out for the next couple of months, so I am going back through all of my old MySpace blog posts and finding ones that I think are interesting or entertaining; or entries that just seem like a shame to not have on Needless Things.
Today’s post is from the Summer of 2009 (most of these are from 2009) and was written right before TNA’s big move to Monday nights. I think it’s an interesting read given where the company is today. I also think I was right about almost everything I said.
I might have been a little too harsh about ODB, though. It’s been almost four years and her balls still haven’t fallen out during a match, so maybe I was wrong.
I just read something really hilarious.

When I write a new post, I pull up an older one to use the format so that everything looks nice and neat on the blog page. Usually I will pick something at random, delete the body, change the header and start typing. Often I will read the original post before I delete it. What I read today amazed me. It was a post called “Everything Sucks” from a little less than a year ago. Mostly it’s just bitching about TV and wrestling and how much the last SmackDown game sucked, but there is a section where I complain about $800 in home repairs I had to make. That is the super-funny (but not really) part, considering we are rapidly approaching the ten grand mark on repairs (not including the roof, which insurance actually deigned to shell out for) thanks to the 9-21 flood. I wish rain was a person so I could ________________ (I couldn’t come up with anything quick and horrible enough to go here. I could write a book about the various tortures and abuses I would heap upon a personification of rain if it were possible).
But, as always, we’re not here to talk about my miserable bullshit. We’re here to talk about tomorrow night’s head-to-head programming of TNA and WWE and…….. (drum roll, please)

Here are a few things rumored to be occurring:
Off the top of my head, here are a few other changes I think TNA really needs to make as part of their “relaunch”:
Another sad rumor that I have no trouble believing is that our future holds a feud between the teams of Dixie Carter, Hulk Hogan and Kurt Angle (faces) and Mick Foley and Jeff Jarrett (heels). Fucking shit.
I suppose I should also address WWE’s response to TNA’s challenge. Surprisingly, there is one.
WWE has gone out of their way to obtain the hosting services of one Bret “The Hitman” Hart for tomorrow night’s RAW. Not only that, WWE has signed Hart to a short-term talent contract that apparently lasts at least through WrestleMania. Now, the timing of this may be pure coincidence; as Hart has been on the WWE radar for a return for quite some time now. It does seem like a bit more, though, given that it all went through within weeks of TNA’s announcement of their live, Hogan-infused show for the 4th.
Also making Hart’s presence intriguing is Shawn Michael’s promise to Vince McMahon that “Only good things will happen” if Vince would just let Hart host the show. Add to that DX defending the tag titles against JeriShow, Kofi versus Orton and NO JOHN CENA!!!!! and you get a show that I’ll be watching as soon as Impact is over. I’d hate to have to actually choose tomorrow night, but if I had to I’d go with…
RAW is more likely to be a good show. Impact is more likely to be a chaotic, groan-inducing mess. WWE is going to be around for a long, long time putting on memorable (and not-so-memorable) shows that may be even better than tomorrow’s RAW. TNA may only get this one opportunity to really shine or fuck up the world.
I guess I’d have to pick TNA. It really is a make-or-break night for them, regardless of how much everybody but Hogan is downplaying it. It will show if they really are still capable of putting on an amazing, compelling show or if they truly have lost whatever it was that made them special in the first place. I think a lot of TNA fans might be in the frame of mind I am in: This is it. If they can’t get their shit together to go up against RAW, then they sure as hell aren’t going to be able to do it right for any significant amount of time in the future. I’m not looking for TNA to crush WWE in the ratings or anything ridiculous like wheeling out The Rock, I’ll just be satisfied (and surprised) if I can sit back and say, “Wow, that was actually really good” when it’s over.
All I want is to have TNA make me eat my words of doubt. If they do, you can bet I’ll be here to write about how awesome they are.
Note: I just checked LordsofPain.net again to see if there was any new info. That place cracks me up. One of their headlines is “Kelly Kelly Desirable”. Way to go, guys. That’s about as creative and insightful as “Algebra Confusing”.
-Phantom