I think it’s entirely possible that doing these as video reviews is going to allow me to get reviews out in a more timely manner.
One advantage is that I can do reviews while Lil’ Troublemaker is hanging out and playing. But he has to be quiet, which he is about as good at as his mother. I asked him if he wanted to contribute, but he declined. He was too busy having his version of the Justice League – New Frontier Batman and Martian Manhunter, Justice Hal Jordan and Batgirl, New 52 Superman, DCUC Aquaman, Iron, and Mercury, some DC Direct Flash, and Young Justice Robin, Artemis, and Red Arrow – beat up Composite Batman/Superman. 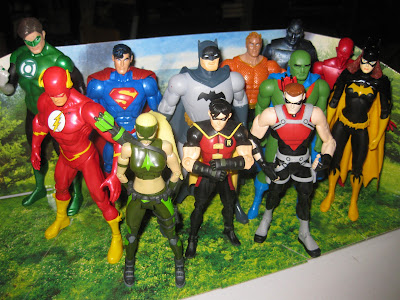 I like Larfleeze. As a matter of fact, he might be my favorite character that Geoff Johns introduced into the Green Lantern mythology. He wasn’t overused, it was a treat every time he showed up, and the Larfleeze Christmas Special is great except for one huge, glaring error in the way it addresses the Santa thing. That really pissed me off.

If you are any kind of Lantern fan, this figure is a must. I know the shine has worn off of pretty much anything having to do with non-verdant Lantern Corps, but Larfleeze is a good one. The thing now is to find out if Matty did him justice.

Another figure that frustrates me because it is so easy to see how great it could have been, if only Matty had given a shit.