This is another brilliant idea I put up on Facebook. I asked if anybody thought it would be a good idea for me to review some random book from Previews’ “Green Section”.
For those that don’t know, the Green Section is where all of the independent publishers solicit their awful books. Whether it’s some random collection of drawings of fetuses, pervy stories about haunted vaginas (really!), or high-minded art school crap; the Green Section is somewhere I never go. Ever. I’m sure there are a few decent books in there, but it just isn’t worth slogging through all of the huge ads for “Princess Razortits, Queen of Cum” and “Milo the Sad Boy Comix”.
But if somebody else wanted to pick something out for me to review, I figured it might make for a worthwhile post. As often happens on Facebook when I think I have a really good or hilarious idea, I got exactly one response. It was from Varis, who liked the idea and promised to have a book waiting for me when I went to the shop on Monday.
This is what I got: 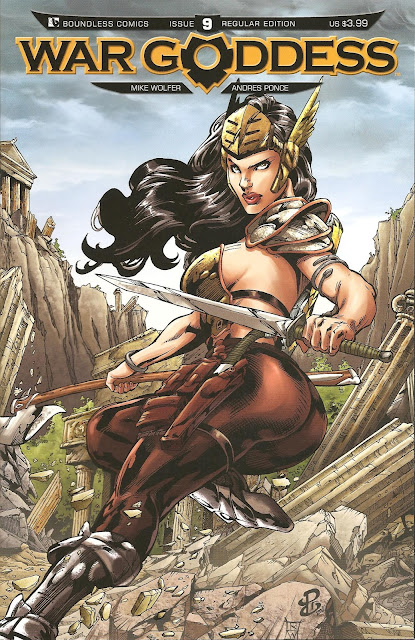 Honestly, it doesn’t look too bad. I’ve seen worse. The art isn’t terrible, and while the titular War Goddess is in one of those anatomically improbable poses that display both her ass and her tit, at least she’s mostly clothed. Maybe this will be okay.
In a first, I’ll be reviewing this as I read it. So we’ll see how that goes.
Also, keep in mind that this is issue 9. This signifies a few things – 1) The creative team gives at least nine issues worth of a shit about the story they are telling, 2) It has sold well enough to make it to nine issues, and 3) If the story doesn’t make a lick of sense, it might only be because I have not read the previous eight issues.
War Goddess is published by Boundless Comics, which is a division of Avatar. This issue is from July of 2012 (a good sign that it spent six months on the shelf before I got to it) and was available with regular, wrap, art noveau, and – wait for it – sultry covers. So it could well have had the exploitative T&A cover that I was mocking. Where’s that one, Varis? If titties are available, I want them next time. Dammit.
The story is by Mike Wolfer, the art is by Andres Ponce, and the color is by the hilariously 90’s-sounding DIGIKORE Studios.
Right away there’s a typo on page 1 – “Industies”, but Marvel and DC have typos all the time. I won’t hold that against War Goddess. I’m a little confused by where this green chick is, but I get what’s going on. War Goddess has gone somewhere she shouldn’t be. And she says “shit” right out of the gate, letting me know that this is that kind of comic. Also, she makes it clear that she is used to dealing with tough customers. 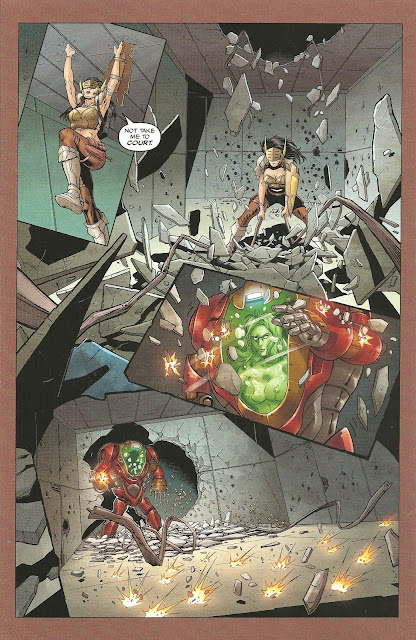 On page 2 we finally get to the titties. It was a long wait. The titties belong to the green chick, who is in the chest compartment of that big robot. Makes sense now. It’s actually a cool visual, though I don’t know why this robot –which I guess is more of a mech – needs a woman immersed in lime Jell-O in its chest to run it. But that may have been explained in issues 1-8. The action on this page is clear. I get it. What’s not so clear is that on the next page War Goddess appears to have run behind the walls somehow and has busted out behind Titty-Bot.
War Goddess and Titty-Bot fight for a couple of pages and WG finds out that TB is bulletproof. Again, the action is fairly clear and easy to follow, so this book is already better than the New 52 Justice League. 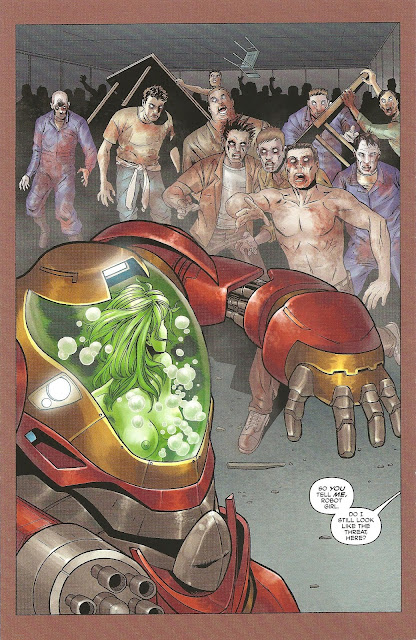 Holy shit. This book is not fucking around. They bust out the titties on page 2 and right away on page 6 there’s a horde of zombies! On the same page as the titties again! This might be my favorite comic ever!
Titty-Bot decides that the zombie horde is a more serious threat and War Goddess makes her escape. I’d like to take this moment to point out that I do not know if “War Goddess” is actually this chick’s name. If Chris Claremont were writing this thing I’d already know her name, powers, current goal, and past ten years of backstory.
But on page 7 we are shown, not told – living the Shooter rules – that War Goddess is an okay lady. She decides she can’t leave her new pal Titty-Bot alone to fight those nasty ol’ zombies and jumps back into the fray, claiming “I’m a sucker for puppies, too.” Which I took as a Jerry Lawler-esque reference to Titty-Bot’s most prominent features. Things just got Sapphic up in here. I totally dig the top right panel on page 8 where WG drives her fist through the back of a zombie’s head. This releases a black tendril that is apparently what is reanimating the zombies. But Titty-Bot can handle black tendrils. And –thankfully – not in an anime way.
War Goddess’ dialogue is pretty painful on page 9, but the action is still clear and the art has stayed consistent. The backgrounds never just fade out, the proportions never get funky, and I was never confused as to how one panel led to the next, or which panel was next. Never mind Justice League, this might be better than sixty percent of DC’s books.
On page 10 we find out that War Goddess’ name is Pandora and Titty-Bot’s name is “Shimmer”, which stands for some nonsense the writer threw together so he could call her Shimmer. I like Titty-Bot better. It turns out Pandora is following the thing that zombified all the zombies. And Shimmer looks very sad when Pandora drinks water in front of her. I guess it’s water, anyway. Given the amount of tough girl sass that’s come out of Pandora’s mouth I wouldn’t be surprised to find out she’s chugging Fireball Whisky.
Pages 11 and 12 are mostly exposition and are handled very well. There’s a flashback that explains how the facility they are in got invaded by the black tentacle creature. It’s all very clear and moves along well enough that you don’t get bored. Just as they’re getting to the bit where Shimmer is going to explain what the fuck she is, a gigantic, black tentacle thumps down between our protagonists. 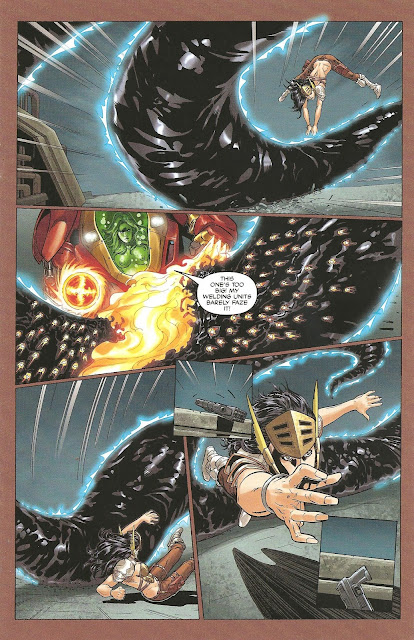 Pages 13 and 14 are Pandora and Shimmer trying to fight the tentacle. All good stuff and well done.
On 15 and 16 the fight continues and Pandora decides that even the combined might of the War Goddess and Titty-Bot won’t defeat the tentacle. She wants to blow up what I’m guessing is a fuel tank. And that’s where we get some conflict between our pals – Shimmer’s duty is to protect the facility and she won’t let Pandora destroy the fuel tank. She hasn’t seemed to worried about shooting the joint up and using her flamethrower all over the place, but I guess blowing a giant fuel tank is a whole new level.
On page 17 Shimmer tells Pandora that the tank isn’t full of fuel anyway, and then the tentacle rips her arm off, which actually bummed me out a bit. 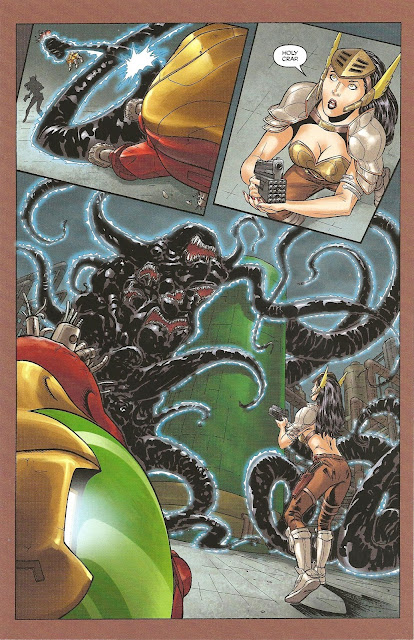 Page 18 reveals that the tentacle actually looks an awful lot like the more outlandish depictions of Venom. Except about twenty stories tall. Things look bad for our heroes.
Page 19 brings an interesting revelation – Pandora is old as heck. Possibly even the "actual" Pandora. She makes a reference to using Greek Fire centuries ago in naval battles. Shimmer is shutting down after having her arm ripped off – which seems kind of weak for a badass enforcer mech – so is unable to stop Pandora from blasting open the top of the tank and showering the tentacle with powder that will possibly kill or incapacitate it.
On Page 20 the tentacle crumbles to dust, Shimmer is unconscious, and a new player speaks from off-panel. I also have to give the creators a lot of credit for their use of pages. They’re good with putting surprises and revelations the next page over so you have to turn it to see what’s up. 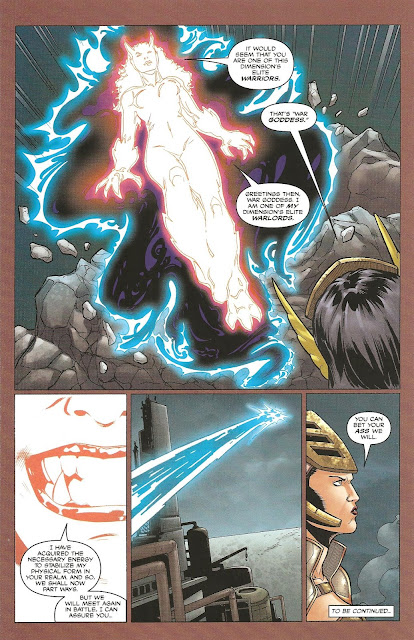 Page 21 leads me to believe that it was the tentacle monster talking, only now it is a glowing, naked demon lady. She claims to be a Warlord from another dimension and Pandora says she is a War Goddess. Glowing demon lady says they will meet again and just flies off, saying they will meet again. “You bet your ass we will” says Pandora. What an attitude on that vixen.
And that’s the end. Well, of issue #9, anyway.
Honestly, that wasn’t a bad comic. I’m not particularly compelled to follow up, but it was competently done. Pandora was a little over-the-top dialogue-wise, but she was easy to get. At no point was I confused about her motivations or what was going on. I never felt like I was missing anything significant, either. Pandora is ancient, she is tracking down some sort of evil force. Got it. Shimmer was an interesting character, and not just because of the titties. She’s a corpse in a mech suit, which is cool. We didn’t get the backstory and I have to admit I’m curious about that. I’m also curious about this whole warlord from another dimension thing.
So honestly, War Goddess is better than about ninety percent of DC’s books.
I could definitely go for another one of these. War Goddess wasn’t awful at all. If you’d like to pick a Green Section comic for me to review, just let me know in the Comments, on Facebook, or by e-mail at PhantomTroublemaker@yahoo.com.
-Phantom
Posted by Phantom Troublemaker at 11:00:00 AM