Predator Week (Extended) – Everything Else

I ended up going over five posts for Predator Week, but I’m sure you guys won’t mind. Because today is the day that I talk about all of the other stuff. This is going to be even more stream-of-consciousness than usual, so bear with me. I did some last-minute viewing and perusing for this one, so I’m going to write as it comes to me.
I watched Paul WS Anderson’s Alien Versus Predator when I got home this morning (Thursday). Yes, I do own that movie and I bought it because I am a fan of Anderson’s stuff and there were things about the movie that I really liked.

There are also a lot of things about that movie that I do not like. At all. I don’t want to use this post to review a single movie, so I’m just going to hit on a few things:
I can’t totally pan this thing. There are some truly great ideas and visuals that just got bogged down by decisions that were made to appease FOX and their perception of theater audiences at the time. I think if this same movie were made now a lot of things would be very different.
2 out of 5

And then there’s Alien Versus Predator: Requiem.

Apparently I let somebody borrow that one and never got it back. Either that or it was one of the movies that we lost in the flood. I’m not sure. But I wasn’t able to watch it again in time for this. I remember liking it more than AvP, but I’ve only seen it once. I bought it, but never watched it again. Not the best sign. I might do a review down the road, because now I have to find out. 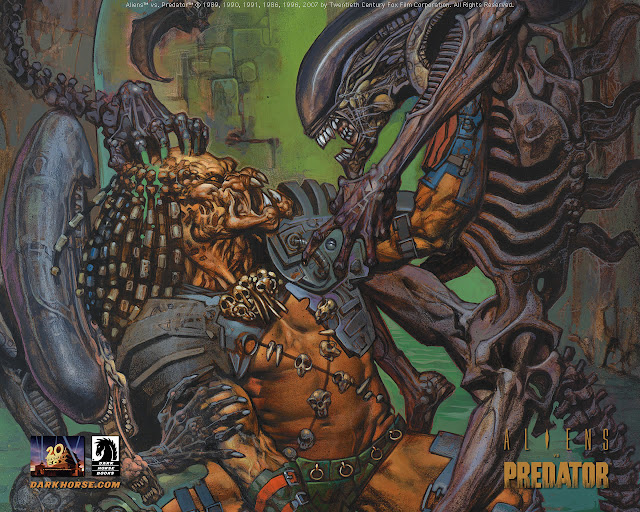 Discussing Dark Horse’s Alien and Predator comics is a daunting task. There are so many of them, it’s been a long time since I read most of them, and even the Alien Versus Predator series aren’t that fresh in my mind despite the fact that I’ve read them all within the past few years thanks to the Omnibus editions.

But I can tell you where I got into Dark Horse’s comics. As a matter of fact, the series might well have been the first comics I bought from Dark Horse.

As I have mentioned before, Chris Claremont’s run on Uncanny X-Men is what made me a comic book collector. Batman as a character was my gateway and opened me up to reading comic books, but Claremont’s compelling ongoing narrative is what hooked me. So when I found out (possibly through Previews, possibly from the guys at the comic shop) that Claremont was writing a comic about Aliens and Predators I had no choice but to check it out. 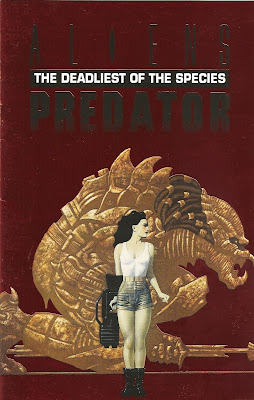 Alien/Predator: Deadliest of the Species is an epic, 12-issue comic book series written by Claremont and drawn by Jackson Guice and Eduardo Barretto. Oh, and another big selling point were the beautiful covers by John Bolton. It ran from late 1993 through early 1995 and it changed my mind about licensed media tie-in comic books. Not that I had even heard that phrase at that point, but I knew from experience that comic books that were directly tied into movie projects tended to suck.

But DOTS (normally I hate abbreviating things, but I’m not typing “Alien/Predator: Deadliest of the Species” more than once) was a high water mark of 90’s comics. The story was typical Claremont – layers of intrigue, tons of engrossing characters, and a level of personal drama that stopped just shy of being soap opera-esque. The visuals were distinctive and created a very different world that sucked you into the narrative. I wouldn’t know this until later, but it feels almost like a Moebius comic in its other-worldliness.
I’m honestly not quite sure how to describe the plot without giving too much away, but it takes place in the future when Earth has been overrun by Xenomorphs. The central character is the trophy wife of a powerful man. There is a big, mysterious secret. There are mercenaries and there are Predators and there is a villain more insidious and evil than the Aliens or Predators. It’s a damned good read and I’d put it up against any current comics. The whole thing is collected in Alien vs. Predator Omnibus Volume 2, along with a few other stories worth your while.

One of the most surprising entries are the Batman Versus Predator comics, a joint effort between DC Comics and Dark Horse. There were three different miniseries and the first one actually predated DOTS by a couple of years. Dave Gibbons wrote and the Kubert brothers provided the art. It was essentially Predator 2 with Batman instead of Danny Glover and if you think that’s a great idea you’re right. Despite being a complete rehash of the sequel, which was already very similar to the original; Batman Versus Predator was a fun miniseries.

I own the second series and liked it so much that I didn’t buy the third.

And that's it for Predator Week. Come back tomorrow for a review of a toy I didn't think I'd bother buying, but ended up being thoroughly enchanted by.