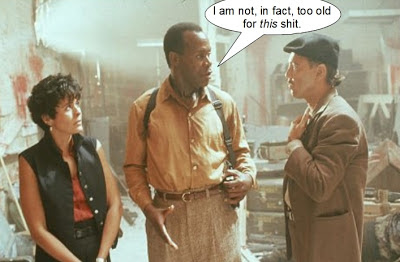 I think it’s absolutely crazy that Predator 2 happened the way it did. Not only was megastar Arnold Schwarzenegger absent from the sequel, they chose to replace him with Danny Glover. At the time I only knew Danny Glover from the first two Lethal Weapon movies. Now, those are great action movies and you’d think one of the two main actors from such a great franchise would be a great star for another action franchise. The big stumbling block for fourteen-year-old me was one of the most famous catchphrases in the history of the universe:

“I’m too old for this shit.”
In the same year that Predator came out Roger Murtaugh – Glover’s character in Lethal Weapon – was celebrating his 50th birthday. Predator 2 came out in 1990. While 36-year-old me does not think that 53 is very old, 14-year-old me thought that was fucking ancient and far too old to be duking it out with the badass alien monster from the first movie.

Side Note: I do understand that Glover’s on-screen age in the movies has nothing to do with his actual age, but there’s just no separating “I’m too old for this shit” from the man. I have no idea how old he really is, but in 1990 as far as I was concerned he was fifty-three.

However, that alien monster was pretty fucking badass and I wanted to see more of it. So while I was not excited about Glover, I was happy we were getting another movie starring Stan Winston’s creation.

(from The Jumping Frog)

Another thing that was confusing was how exactly the Predator was back. It wasn’t as easy to keep up with movies as it is now and as much as I loved Starlog and Fangoria those magazines weren’t always easy to find or practical to spend my money on. There had to be something pretty spectacular on the cover for me to spend five bucks on one of those, so I probably missed out on any preview articles explaining the deal with the movie. So as far as I knew the Predator had been blown up at the end of the first movie and that was that. I recall going into Predator 2 assuming it took place prior to the original and then being surprised when “Los Angeles – 1997” popped up on the screen. Shit, so this thing takes place in The Future? How is the Predator back?

I think I spent the whole movie trying to figure it out. It wasn’t until the Lost Tribe showed up at the end that I realized it was just one of a race. I’m sure plenty of people assumed that after the first movie or figured it out or whatever. I was not one of them. So it was actually kind of a double Holy Shit for me when all of those other aliens started appearing out of the mist around Danny Glover. Must have been a quadruple Holy Shit for him.

I just jumped right to the end of the movie. I need to back up to the beginning.

Like it or not, Danny Glover is the human star of this particular Predator story. I didn’t like it at the time, but I have grown to appreciate Glover’s performance and unique charisma over the years. I still think he was a poor choice, but he did a great job for the situation he was in. Especially considering the other thing he had going against him – Roger Murtaugh was a sort of loveable curmudgeon. He might have groused a lot, but he was a good man who was kind of everybody’s pal. Glover’s character in Predator 2 was just sort of a dick. The only reason you like the guy at all is because he’s Danny Glover. And also, I guess, because in the opening scene of the movie he drives a car sideways into the middle of a gang war while hanging out of the driver’s side door. In a similar setup to the original movie, Glover is quickly established as a badass. The first fifteen minutes features his police officer character basically single-handedly ending a gang war in the middle of LA and then busting the surviving gang members. All while the Predator watches.

That’s not the only similarity to the first movie. Predator 2 is almost literally Predator, except in the city. But there are enough differences to make it both more engaging and yet worse than the original. The first big improvement is the larger number of people available for the Predator to kill. There are a lot of people in LA, plenty of whom deserve to die. Sometimes slasher flicks take a few movies to figure out that the villain has become the protagonist. Not so much here. This time around the Predator is mostly killing gang members and drug lords. It’s great. You can really sit down, eat some popcorn, and root for the slaughter. Every once in a while a Ruben Blades or a Bill Paxton gets in the way, but mostly it’s scumbags. And lots of them.

The very first scene where the Predator cuts loose is extremely well done and memorable. Some drug guy is nailing a very naked chick (titties – another improvement) when a bunch of Rastafarians in outrageous clothes bust in and string the guy up to sacrifice him to their boss. That’s when the Predator strikes and also when we get to see yet another upgrade from the first movie – this Predator has new toys. Over the course of the movie it uses a extendable spear, a razor-edged Frisbee, and a net that contracts and would presumably dice its victim if it retracted fully. They’re all neat gizmos and so iconic that I was actually surprised to realize that the only things the Predator in the original had were the forearm blades and the shoulder cannon. If I’d really thought about it I would have known, but when just casually considering Predator it doesn’t occur to me.

As much as I’ve talked about Danny Glover, he wasn’t alone fighting the Predator in this movie. Far from it, actually. The supporting cast includes Maria Conchita Alonso, Ruben Blades, and Bill Paxton as fellow cops. Paxton is great as a fast-talking new transfer.
One of the first big surprises of the movie is when the DEA agents played by Gary Busey and Adam Baldwin turn out to be a special ops team that already know about Predators. And now that I think about it I realize that this is the point where Busey explains about Predators visiting Earth for years, so it didn’t take until the end of the movie for me to know that. No double Holy Shit for me I guess.

Anyway, this was a great plot point and it provided some direct continuity with the first movie. I like that it wasn’t brought in until later in the movie. Danny Glover has to bust into the outfit’s secret base of operations to find out what’s up. And Gary Busey tells him more out of exasperation than anything else. It’s kind of a “Fine, if you’re not going to butt out, here’s what’s going on. Dick.”

It might seem a bit clichéd that these guys want to capture the Predator and study it (a terrible idea, of course), but it works because that’s exactly what the real government would do. There’s a whole subgenre of 80’s movies based around this concept and I personally think they’re documentaries in disguise. Just like ho The Shining is Stanley Kubrick’s confession that he helped to fake the moon landing (just kidding).

Of course that whole operation is an utter failure and Danny Glover is left to fight the Predator on his own. He does all right for a guy that’s too old for this shit. As a matter of fact, he does better than Arnold. Using one of this Predator’s fancy new tools against it, he cuts off its left hand to stop it from activating an explosive device like the one that ended the first movie. This creates two interesting situations.

First, we get an expansion on the first-aid scene from Predator. In that one, the alien just had to cover up a couple of little boo-boos. In this one, Danny glover had just fucking lopped the thing’s arm off. It took a little more than a Space Suture to get him back into fighting shape. This time the Predator throws a bunch of broken pieces of tile, drywall, and mirror into a sink and somehow mixes them up into a poultice or something that seals its arm up. It’s gross and also gives us the opportunity to see a few more medical tools.

The second interesting situation is who the fuck found that Predator hand!?! That thing just fell into an alley. Imagine that. You’re walking your poodle one morning – assuming you have a poodle – and come across a gigantic, clawed monster hand with half of some kind of miniature computer on it. Do you pick it up? Do you call the cops? Personally, I’d just leave it there and keep going. I don’t need any kind of alien hand drama in my life.

Danny Glover may be 53, but the Predator doesn’t want to take him on one-handed. It escapes to its ship, but a determined Glover follows and we get to see this:

(from Big Bad Toy Store)
That was one of the most awesome things I had ever seen. To see that Xenomorph skull in a Predator movie was a tease and an acknowledgement at the same time. Unfortunately it was also what screwed up both of the franchises for several years. But that’s another post.
For now I need to get back to Mister Glover and his Predator problem. There’s an okay fight that is only believable because of the Predator’s involuntary and recent forced right-handedness, but the alien is once again defeated by its own weapon. Glover plays possum and then jams the Death Frisbee into its gut, killing the shit out of it.

And that’s when the Lost Tribe shows up to blow minds. I just watched Predator and Predator 2 again the other night, and I did not remember there being so many of them. There’s like, ten. I thought there were maybe four or five. Danny Glover is fucked.

Or so it would seem. They pick up the dead Predator and just leave, only acknowledging Glover when the leader turns and tosses him an ancient flintlock pistol. Then the shop starts to take off and Glover guns it out of there. And in another scene similar to the first movie there is a huge ball of fire and our hero is left staggering about in the aftermath, all of his friends dead and having won what hardly seems like a victory.

Predator 2 has its flaws. Some of the dialogue is really bad. And I don’t mean Arnie one-liner bad, I mean Disney Channel afternoon teen shows bad. The plot is recycled, but most Predator narratives are. I’ll talk a bit about the Batman Versus Predator comics on Friday. I love them, but they’re basically just Predator 2.
Side Note: They also did Superman Versus Aliens and those were terrible.

All in all I like Predator 2. It moves right along, there’s plenty of slaughter, and the parts that tie it to the first movie make sense. If you haven’t seen it for some crazy reason I definitely think you should give it a chance. Ice Cube liked it.
Oh, and then there's this: