Since this is the day after Days of the Dead Atlanta, I thought I’d bring back an old favorite of mine. This is a post I did for my Halloween Countdown back in 2008 on my MySpace page, which I haven’t even been to in… oh, who am I kidding? I was just there a couple of weeks ago. I’m always curious to see if the whole thing might just disappear one day.
Anyway, as far as I can tell I never reposted this here, even back when I was doing regular “Vintage Troublemaker” posts. I always liked this one and since it was on MySpace I’m pretty sure nobody ever read it. Also, I was WAY short on time last week. Way too much to do. I had to finish putting my Phantom Murdermaker costume together, find a costume for Mrs. Troublemaker, buy some supplies, host a Royal Rumble party, and various other things that I knew were just going to creep up on me. For instance – I just remembered I need an oil change and also need to replace that busted headlight. And a couple of taillights. And clean the gutters. See what I mean?
I haven’t update the list itself – though I might do that soon – so it’s the same as it was in 2008. See what you think and please leave your comments here or over on Facebook. Or on Twitter, though I think I am deciding I kind of hate Twitter.

Crap. I just realized I left Tremors off the horror-comedy list, too. Put it in at, say, number five. Fuck it. I’m just gonna do that list over at some point…
This list seems to be mostly humanoid-type monsters. I’m not sure where the line should be drawn between these and stranger creatures like the Graboids from Tremors or the Blob, but I’m certain there should be one.

10 – Evil Swamp Thing
I’m talking about the tan swamp thing that Arcane turned into at the end of the Wes Craven movie. That thing scared the crap out of me as a kid, and I still get that nervous anticipation before he shows up when I watch the movie now. As an aside, the creature that Arcane’s midget turned into freaked me out too. When he jumped up on the table the first time I saw this movie I just about shit my pants.

9 – The Gill-Man
I still believe the Creature is one of the greatest accomplishments of it’s era. Even today you can’t detect seams or anything on that suit. It is absolutely amazing. The way it moves is so eerie and natural. As a kid, you could really believe they just filmed some creature they found (in a black lagoon). The only reason he isn’t higher is that I never really found the Creature all that scary, I was just fascinated.

8 – Chinese Wild Man
Big Trouble in Little China is one of the best movies I have ever seen. The cast is great. The story is amazing. The effects are awesome, even now. It is a fun flick that has kung-fu, jokes, sorcery and monsters. The best monster in the movie is the Chinese Wild Man that serves Lo-Pan. This guy looked like Beast-Man’s mutant cousin and gave me nightmares for weeks. The part at the end where he pops out of the back of Kurt Russell’s semi still gets me every time.

7 – The Tall Man’s Midgets
(Image from Phantasm.com)
These guys freak me the fuck out. The are short and fast and make horrible noises and hide in trees so they can jump on you. They made me not like Jawas as much. 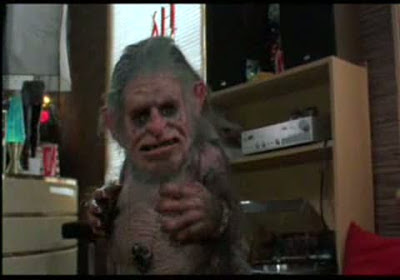 6 – The Troll
If I got sick when I was a kid, my mom would go to Turtle’s (remember that?) and rent a couple of movies for me. Transformers, The Neverending Story, that kind of stuff. One day she brought home a movie called Troll. I can only assume she did this because she hated me and never wanted me to sleep again. This movie scared the fucking shit out of me to the point where I actually had to say something about it, risking my movie meal ticket. I have only watched it once since then and it still freaked me out. Oh yeah, Sonny Bono is in it. 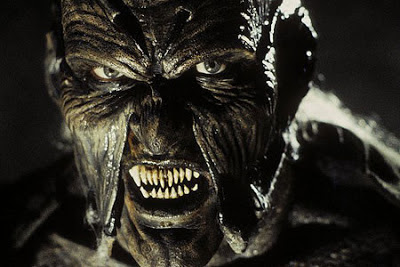 5 – The Creeper
I guess that’s what it’s called, anyway. This thing is awesomely designed and is very cool and creepy in both of the movies that feature it. I actually had no interest in the first Jeepers Creepers before I saw it because it had such a stupid name, but it ended up being a great movie. This fact is somewhat overshadowed, however, by the shadiness surrounding the director. You can look that up yourself. What? You’re already online, you know.

4 – Pumpkinhead
(Picture from BigBadToyStore.com)
No great monster list would be complete without Stan Winston’s Spirit of Vengeance. The first time I saw this movie I could swear that thing was real. The way that it moved just seemed impossible.


3 – Werewolves (The Howling)
These really creeped me out. Yeah, the one from An American Werewolf in London may be more impressive effects-wise, but these just seemed more evil and scary. These movies gave me nightmares, too. The one in Australia especially bothered me for some reason. 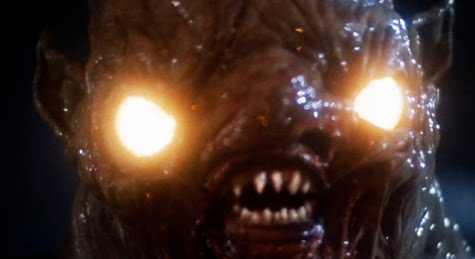 2 – C.H.U.D.s
The Cannibalistic Humanoid Underground Dwellers are some of the scariest monsters around. The fact that they want to eat us is bad enough, but they live right under our fucking feet!!!! These things look great and provided a lot of horrifying moments. The sequel sucked donkey balls, though, so be careful. 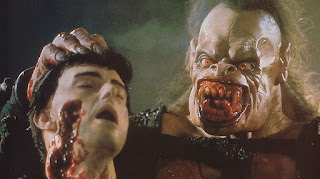 1 – Rawhead Rex
This guy almost seemed like a Pumpkinhead rip-off. Rex would be to Pumpy what the yeti is to a sasquatch. Rawhead Rex was scary and looked great and all, but the real reason he’s at the top of this list is because he went number one on a priest! This was easily the most horrifying thing I had seen in a movie up to that point. It’s not like it’s a little tinkle, either; he unloads on the Father like a fire hose on a burning orphanage. Rawhead Rex is an asshole.

Posted by Phantom Troublemaker at 9:20:00 PM