(It occurs to me I need to update that image)

I went on Facebook the other night and asked for suggestions of nerdy things to write about. I covered the first three yesterday. Today I’ll wrap things up.

Suggestion #4 comes from The Mystery Men?’s drummer. He said I should write about surf rock.

Here’s everything I know about surf rock:
Surf Rock.

Evil wanted me to talk about how much the New 52 sucks and also about Arrow.

I’ve talked about DC’s New 52 before – every single Comic Book Update, as a matter of fact - but to summarize; I hate it. I think it’s a failure with a few exceptions and those exceptions are, in truth, pretty grand.
If a reboot is not done in a brilliant and engaging way it is nothing more than the publisher’s permission to not give a flying fuck about their product anymore. Titles that you might have given more of a chance if they were rooted in continuity or had a hope of returning to the status quo can be dropped with impunity. Adding to that feeling of disposability are the fact that DC themselves are constantly cancelling titles and the fact that in many cases these characters are very different from what we know.
I never cared much for Superman. Like anything, when he was written well he was interesting, but the concept of the character himself was never alluring to me. He seemed to invincible and any challenges he faced seemed to require cheap de-powerings to work. Then New 52 happened and in addition to being nigh-invincible he became a dick. If there was anything I liked about old Superman, it was that he was always the bright, shining light of hope. New 52 Superman – what I read of him before dropping Action Comics (which I couldn’t follow at all and did not like the art) and Justice League (which I nominate for “Worst Opening Story Arc of All Time”) – was a total asshole. And so, it seemed, was everybody else.

Side Note: I have just in the past couple of years come to truly appreciate writing. I will use the Doctor Who 50th Anniversary as my example:
We can all sit around and speculate about what that special will be. It’s fun and it’s something we should do, especially those of us who have a bi-weekly podcast to maintain. But in the end, it does not matter what it’s about, who is in it, or how long it is. If a good writer pens it, it will be good. Regardless of the characters or situations a good story told in an engaging way will be satisfying.
This is why despite the fact that I love Batman with all of my heart there are Batman stories that I would never, ever read again. Conversely, even though I don’t care for Superman I still think that All-Star Superman is one of the best comic books I have ever read.
Another good example is Owly by Andy Runton. I am not predisposed to like owls. At first glance, there doesn’t appear to be anything about Owly that would appeal to me aside from the fact that it is unbearably cute and even the aforementioned Human Hand Grenade would go, “Awww,” at the sight of one of the panels. But Owly features some of the best sequential storytelling I have ever seen in my life. Without a word of dialogue. It’s all in the writing.

As much as I bag on the New 52, I am still collecting more titles than I realized. Here’s the ones I’ve managed to hang onto and why:

Batman – This one has been awesome except for “Night of the Owls”. I just didn’t like how that story turned out. The depowering of the Talons halfway through the story was pretty lame. When it started, all it took was one Talon to almost kill Batman. By the end of the narrative Catwoman and Penguin were able to take one down. And then there were the three issues of Batman that were nothing but Greg Capullo drawing Batman wandering around in Monty Python backgrounds with a beard. Thankfully, the issue immediately following “Owls” was excellent and then “Death of the Family” came along and is legitimately one of the best Joker stories I’ve ever read.

­Batman and Robin – Which is essentially a book about Damian Wayne. And is excellent in both story and art.

Nightwing – I really wish Dick would get out of Gotham and be his own man. And after the events of “Death of the Family” maybe he will. I just hate that we lost all of the character development that happened leading up to “Flashpoint”.

Batman Incorporated – This has gotten really… unwieldy. I suppose when I go back and read it all in one sitting it might come off better. Also, *SPOILER ALERT* I am tremendously bothered by the rumors that Grant Morrison is going to kill off Damian. Bruce’s son is one of the best characters DC has introduced in the past… I don’t know how long. While Morrison may consider his death a fitting end to his run on Batman, I find it to be a cheap theatrical stunt at this point. This Batman is an entirely different Batman from the one that Morrison started writing all those years ago and Damian is a critical part of the character now. Of course, it isn’t even certain that Batman Incorporated takes place in the current DCU. We’ll see, I guess. *END OF SPOILER*

Batwoman – Speaking of unwieldy, any book that is still telling the same story seventeen issues in is not doing things right. And that includes a lot of the New 52. The whole stated idea was to create a jumping-on point for new readers that wasn’t immersed in continuity and mythology, but I’ve been reading DC Comics on and off for thirty years and some of these books are confusing the fuck out of me. I can’t imagine what a new reader thinks of them. I did just finish issue #17 and I am happy to report that the gargantuan Medusa storyline is over. And I am quite pleased at the teaser at the end of the issue, though it would seem to signify that everybody is pretty sure Greg Rucka isn’t ever coming back.

All-Star Western – This is the bright, shining star of the New 52. I think it’s a book that probably wouldn’t have happened if it weren’t for the reboot, and at the very least wouldn’t have happened if not for Grant Morrison’s “Return of Bruce Wayne” story. Justin Gray, Jimmy Palmiotti, and Moritat consistently put out one of the best comics on the stands. The backup stories have been hit-or-miss.

Wonder Woman – I love the art in this book when Cliff Chiang is doing it. Brian Azzarello has been telling a good story with occasional bouts of decompression. I like all of the mythology and in particular am enjoying this characterization of Wonder Woman.

Justice League Dark – I was going to drop this one, but it got a new creative team right when I decided that. I’m glad I stuck around because it has been excellent. I love the interaction of the team and the fact that there have been clear story arcs. I would like them back on Earth sooner than later, though. I’m not a fan of dimension-hopping for the most part. If it isn’t done carefully it just feels like a cheap way to avoid a story having any real impact on the world the characters inhabit.

Wow. That’s it. I’m only buying eight books from DC right now. That’s down from over twenty in 2011 right before the reboot. Good job, DC. My wallet thanks you. 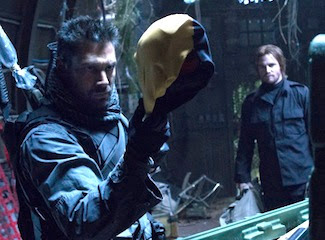 As far as Arrow is concerned, me and the missus are both enjoying it. The dude playing Oliver is okay. The stories have been good so far and the backstory is fascinating. Diggle is great, Felicity is great, and the Queen family is solid. Obviously John Barrowman is excellent as Malcolm Merlyn. And the dude who played Crixus on Spartacus being cast as Deathstroke is fantastic. Actually, an awful lot of the show’s charm comes from the shameless stunt casting. It’s almost like Batman ’66 all over again – Lincoln Lee from Fringe as Count Vertigo (and he was AWESOME), Ben Browder as a Blackhawk, Gaius Baltar from Battlestar as a new villain who watched the Rutger Hauer classic Deadlock too many times. And coming soon is none other than Ms. Feisty Universe herself, Alex Kingston aka River Song as Dinah Lance’s mother. And that brings us to the only dark spot of the show – the sack of duh playing Tommy Merlyn. That guy is just fucking terrible. And he drags down every scene he is in. I liked the girl playing Dinah/Laurel a lot until she started dating Tommy. Now I dread scenes with her because he is usually involved as well. But overall, Arrow gets a B+.

Finally, there’s Jessa’s suggestion of “To Hell You Ride”.

I had no idea what that was at first. It sounded vaguely familiar, but definitely awesome.
A quick search (once I got the chance) reminded me that it was a Dark Horse comic written by Lance Henriksen and illustrated by (dude). I was curious about it when I first saw it solicited in Previews, but seeing as my pull box is full enough every Wednesday I passed on it. But now I’m curious again. I said I’d try and hunt it down, at which point Jessa suggested Dark Horse Digital.
This is a new, frightening thing for me. I love my paper comics. I love my comic shop. Well, most of the time. Well, sometimes. But I love other comic shops a lot.

Side Note: I suspect chicanery with relation to my Klingon Bird of Prey. Well, that’s not true. I have been informed of what sounds like it is almost certainly chicanery. Just throwing that out there.

Anyway, I have been resistant to digital comics. Mostly because we don’t have a tablet. I can’t imagine trying to read them on my phone and typically the time I spend sitting at the computer is posting these things. I don’t watch movies or read comics on the computer. Just not a thing I want to do there. If I could download a comics reading program to a flash drive and bring that into work that would be great. Of course, that would also be likely to severely damage my output here. So I dunno. But one way or another I plan on reading “To Hell You Ride” and providing some sort of review or discussion of it. Because I like Lance Henriksen, but more than that because he’s a fucking nutball. And also just a little bit because it takes place in Telluride, Colorado. Yeah – seriously. If you don’t get it, say it out loud.