The first toy TARDIS I ever owned was actually a bank that my parents brought back from a trip to the UK. Mom had asked if there was anything I wanted and I told her Doctor Who toys. This was back in 2006 right after David Tennant had taken over as the Doctor and before Americans had the access to Doctor Who merchandise that we do now.
They also brought me a David Tennant figure, which disappointed me because I hadn’t seen him yet and really liked Christopher Eccleston. But I still have that Tennant in the package: 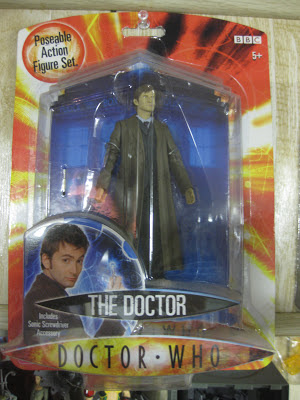 It would be a couple more years before I got any Doctor Who figures I was willing to actually open.
So the TARDIS was a bank, but it was scaled to go with the 5” action figures. It lit up and had a sound chip with TARDIS noises and a few quotes from Eccleston and Billie Piper. I was fascinated and thrilled by this thing. I couldn’t believe I owned a TARDIS. The Doctor figure was fine, but it was some guy that I wasn’t familiar with. The TARDIS was the TARDIS. That blue box has changed over the years, but not much. It’s as iconic as Castle Grayskull or the Millennium Falcon, but at the time much harder to come by.
The amount that it could interact with the figures was limited. Since it was a bank and not an actual toy it had a façade just behind the opening doors with a picture of Rose and the Doctor (Eccleston) in front of the TARDIS interior. When you opened those doors you got the sound effects.
I’ve had that TARDIS sitting on the shelf behind my now-huge collection of Doctor Who toys for a few years now. But when I found Doctor Who figures in stock at Toys R Us, I couldn’t help but buy them for Lil’ Troublemaker. I did not need to be starting him on a new collection, but I couldn’t help it. I wanted to buy Doctor Who figures from an American toy store. It was too big a deal. And I already had both of them. Of course, there was another problem beyond starting my son – who collects toys as vehemently as I do – on a new line. And that was that he would have to have a TARDIS.
I had been thinking about buying a new TARDIS toy for a while. Mostly I had been looking at the Classic Doctor Who box sets that included a Doctor figure and the corresponding TARDIS. I had pretty much narrowed it down to either McCoy or Hartnell and was leaning towards Hartnell simply because McCoy’s looked so different (although now I want it for precisely that reason). So one day when I was down in the Phantom Zone posting stuff and Lil’ Troublemaker was playing with my Doctor Who toys, I told him he could have the TARDIS bank to play with his figures. I was planning on ordering a new one for myself in the next few days.
Fortunately for me, I found this regular, Doctor-free Flight Control TARDIS at Barnes & Noble as part of a fairly impressive endcap of Doctor Who merchandise. Always nice to not have to pay shipping. I grabbed it along with some other pretty cool toys that you wouldn’t find at other retailers and took it home.
Up until playing with this thing I really had no idea what “Flight Control” meant. I knew it didn’t actually fly or anything, but the phrase confounded me. I was thrilled to find out once I opened the thing up.
I haven’t reviewed a vehicle or playset in a while. As a matter of fact, I think the TARDIS playset might be the last one. As such, I’m sort of playing with the format of the review here.

First Glance: Sorry - the pictures in this one are all kind of crappy. The TARDIS was too glossy for a flash. Doctor Eleven’s TARDIS is classic, despite being the newest model. The blue is vibrant, the angles are sharp, and all of the little signs are intact. This is a great representation of all of that.

Sculpt: It’s TARDIS-shaped. All you can really do with something like this is refer to the what it’s based on, and judging from what I’ve seen this thing is a perfect to-scale representation.
The wood grain that covers the police box adds so much character. The whorls and lines look very natural and a varied throughout the exterior – no pieces are repeated.
The windows are smooth, but have textured panels where appropriate. The door handle, access panel handle, and keyhole are detailed and well-placed. The signage is a sculpted part of the doors rather than being stickers.
The light on top is clear, blue plastic with the frame built around it. It’s sturdy and secure – you don’t have to worry about the thing breaking off as long as you’re not throwing your TARDIS around like a lunatic.

Coloring: The shade of blue is bright and solid. Despite the fact that we all think of “TARDIS Blue” as a thing, the craft has actually been many different shades over the years, whether it was due to wear or simply changes by BBC’s design department. I will say that the plastic is just a tad glossier than I would have liked, but at least it’s molded from blue plastic rather than painted.

All of the signage is sculpted and painted rather than stickers. It all looks fantastic, particularly the little “St. John Ambulance” crest. At a glance the “Police Public Call Box” looks like it’s a bit off-center, but it isn’t. The “Public Call” portion is a bit to the right due to “Police” being a longer word than “Box”. I feel weird pointing this out, but I did have to think about it for a second. Now you don’t have to.

The windows have white trim and black panes and just really look great. The white framing on this TARDIS give the whole thing a classier look somehow.
The TARDIS also has inner parts. The phone behind the access door is nicely detailed and the floor of the interior is solid (color). The interior walls are a sort of forced perspective view of the control room that actually looks reasonably good. I like that CO went with the interior image rather than painting it black or leaving it blue.
All of the various paint apps are amazingly precise on this toy. There is no bleeding or splotching and all of the lettering is centered and accurate.

Moving Parts: The TARDIS has a functioning access door for the telephone and spring loaded main doors.
I was worried that the telephone door would be a bit flimsy, but it is sturdy and securely hinged. It opens easily enough and when it is closed lines up nicely with the edges of the opening.

The main doors push inward – as TARDIS doors do – and lock into place with a click. There is a button on the floor that releases the doors and springs them shut again. You have to open the right door first and close the left door first. When the doors are closed they line up nicely and are snug to the point where you have to look to realize they even open. The doors are sturdy and solid – no worries about the hinges breaking or the spring mechanisms breaking during normal play.

Features: The TARDIS has electronic lights and sounds. These are all activated by doing various things with the toy; and not just opening doors and such. It actually responds to how you play with it. Once you have turned the power switch to the “ON” position, you have several options. If you leave the TARDIS sitting somewhere it goes into “Idle” mode, where the light pulses slowly and the background noise of the control room is produced. When you pick the police box up or put it down it produces the signature wheezing dematerializing noise. When it is moved up and down or side to side it produces different types of distress noises. But the most fun by far is when you place a finger on top of the light and then another on a special indentation on the bottom of the TARDIS. That indentation is on a swivel, so you can spin the TARDIS to simulate flight and you get the travel noise of the craft.
Sensors inside the toy and a pressure switch on the bottom detect how you are playing with the TARDIS, hence the “Flight Control” designation. This thing is an absolute blast to play with and every time I pick it up it’s at least ten minutes or so before I can put it back on the shelf. This is some fun and innovative technology and quite frankly more than I expected out of the toy.
The light on top is very bright, and oscillates in time with whichever sound effect you might have activated, or simply pulses when the craft is in idle mode.

Packaging: It comes in a perfectly acceptable window box.

Nothing too fancy, but with some nice graphics and exciting word bursts to describe the features."VWOOORP! VWOOOORP! VWOOOOORP!" is my favorite.

Value: I wasn’t necessarily excited to be paying thirty-five bucks for this, even considering the higher cost of Doctor Who toys. But after playing with it I feel like this thing is a steal. It’s so much fun packed into what is essentially a simple toy. I can’t say I would have been dissatisfied if it had just produced your normal lights and sounds with the press of a button, but the level of interactivity in this make it a true prize.

Overall: I couldn’t possibly ask for any more out of a TARDIS toy. It does everything I might have wanted it to do and more. This is a great buy for a Doctor Who toy collector, or even just a regular fan.

These are widely available and well-stocked online. Naturally I recommend you check Barnes & Noble or your local comic shop. Either way, definitely find a way to play with one of these excellent toys. Or, of course, you could wait for the 3 ¾” version that will inevitably accompany the newly-scaled-down 2013 line. Dammit.