Guest Star Week: The Girl Who Watches Anything or How I'm Ruining Horror Movies

Welcome to Guest Star Week here on Needless Things!
I put out the call to the Phantomaniacs a few weeks ago for a few guest posts. I have something I really want to work on, but it’s just going to take more time than I normally have to write. It’s a pet passion project – something which may not ever even get published – but I have to do it. I’m really excited about it and have already put it off more than I care to.
Thankfully, I had a few creative and talented people step up with some truly cool entries. I told them they could write about whatever they wanted to that wasn’t religion or politics. I didn’t even want to know what they were writing about beforehand. I said write it, send it, and I’ll post it.
Today’s post comes from Beth V, an old friend and roomate of mine. She used to write semi-regularly for the site I technically got my start on - MC4TR. Well, I had my MySpace blog before that, but getting the post up there and all the responses I got from it are what made Needless Things happen.I also did my first podcast there.


Beth is a sharp lady who shares more interests with me than is probably healthy for the average female. Plus she has a fairly high tolerance for the worst movie of all time, THINGS.

I think I first started ruining movies back in the mid-80's. I was a very indiscriminate child. I also didn't scare easy, and was watching horror movies at a really young age. Campy slasher flix, creature features, gore fests. Really anything that was supposed to be scary. I can't pinpoint exactly where this came from. I don't know for sure how it even started. I could try and fancy myself up by saying that I liked the social commentary or used them to laugh in the face of death, but I know better than anyone that it simply isn't true. Honestly I think it has a lot to do with the fact that my parents were super into science fiction, and I grew up watching some pretty strange stuff (a Boy and His Dog, Time Bandits, Doctor Who back when he was just a ginger in a scarf). So maybe Mad Max led to The Empire Strikes Back which led to Scanners or the Thing (I remember seeing both I just don't remember which one I saw first), and then it was a pretty easy transition to schlock horror from there. Looking at the release dates on these movies I can kind of see how I became so hopelessly twisted so early on. I've been told that I saw the original Star Wars and Star Trek as well as many other movies in the theater, but since I don't remember any of that I can't actually count them. As I got older I easily fell further down the movie food chain. Quickly slipping from Aliens to The Stepfather then to Night of the Demons (it's really bad if you ever want to torture yourself).

But somewhere along the way I went too far. It might have been that time I watched Frankenhooker. Or maybe I loved Jack Frost too much (my brother and I used to go to Blockbuster and switch the boxes of the horror movie with the sentimental crap Michael Keaton movie of the same name. Our sick joke/traumatizing of unsuspecting family types. If you or someone you know has been injured by unintentionally watching Jack Frost please accept my apologies, and details of the class action lawsuit are soon to follow). No matter how bad a movie I watched there was always something worse coming out almost instantly afterward. Like the “filmmakers” were in competition to see who could make a movie I wouldn't watch. As in “she's gotta have a limit. There's no way she'll watch this trash, and then we'll finally get to go back to art college and make real films again”. Sadly, none of them have beaten my bad taste, not even the movie Bad Taste broke my spirit.

I know that as long as I watch, constantly talk about, and even dress up in costumes as (yes, I went as Sharktopus for Halloween a few years ago) horrible horror movies some fool out there will continue to make more. As long as SyFy has a budget to make Dinocroc 2: Electric Boogaloo, as long as my husband makes me watch Asian torture movies, as long as our former roommate tries to talk us into watching THINGS yet again there is no hope of the horror film industry returning to any sort of quality film making.


But when you think about it like that there's really a whole sub-section of Hollywood that owes their entire livelihood to me. The dudes who do half-assed cheap CGI, the “artists” who designed and executed the Mansquito makeup, Costas Mandalor, Debbie Gibson, and even Armand Assante all owe me big time. So the next time you see an ad for Jason X, Piranhaconda, blame me all you want. Just remember that I am helping a lot of otherwise unemployable people find work. I am creating jobs, and helping the economy. When you get right down to it, I'm kind of a folk hero. Helping the people by employing nerds and watching what most people shouldn’t have to see. I'm like Paul Bunyan or Johnny Appleseed only with a lot more blood and guts. 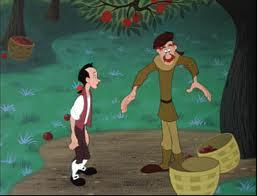 Wait, I think I could do something with a Johnny Appleseed horror movie. I think it would look something like this, but with heads in the baskets (sorry, I not only suck at Photoshop, but am also lazy). Dibs, calling SyFy now...
Thanks to Beth V for 'splainin' some stuff. I fully intend to have her back again soon. Check back in tomorrow for a post that has no place here on Needless Things. And I totally love it for that.