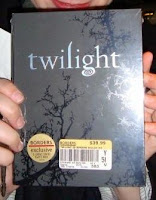 Let me preface this by assuring you that I will not be discussing anything that happens in either the Twilight books or movies. Sure I read the books and saw the movies, but that isn't what this is about. I am not a Twi-hard a Twi-mom a Twi-twink or any other crazy thing with a “Twi” in front of it. I will admit that I am predisposed to like vampires (I blame Anne Rice for starting me down this road). I'm sure many ladies out there will be able to relate to why I like Twilight. And even if you can't relate maybe you guys out there will at least understand this whole Twilight thing a little better after this.

Twilight came upon me at a very vulnerable time in my life. I'd just finished the last Harry Potter book, and was left all alone in the world without a book series to look forward to. A few months later several of my friends were talking about a book they were reading called Twilight. I was warned that it wasn't well written, but still a fun guilty pleasure read. At the time I did not know that it would only be four books long, and that three of them were already out, but that probably wouldn't have stopped me anyway. I tore through the first book in one night. I read the second book in two days, and by the end of that week I'd finished that brand new third book as well. I didn't even mind that I had to wait for the fourth book because me and the girls were busy with other Twilight things. We tried to get others to drink the kool-aid so that we could have even more people talk about this silliness with. And we talked about it a lot. Sadly, at the age of 33 this was the high point (or low point depending on how you look at it) of girliness in my life.


Finally 2008 came and brought not only our long awaited fourth book, but also our first movie. So we gathered at the movie tavern, and proceeded to go super crazy girl ass nuts. Looking back I realized that it was never a good movie. I'm not going to get into how bad the “acting” was, why there was nothing special about the effects, or even how lame that whole sparkly vampire business was. I'm not here to review the movie (but I do love that I got to use that trick where you say what you're not going to do, but by saying you're not doing it you totally just did. Mind games, ha). But I digress. What was fun about the first Twilight movie wasn't even the movie itself. It was the whole experience that made it fun. I was testing the limits of how far I could take this girly thing. It turned out to be pretty far actually. Because in early spring the next year we planned a sleepover for the DVD release. Sure the movie would be playing on repeat all night, but we had so much more going on. There was wine, and cake, and a cardboard standup of Robert Pattinson, and wine, and ice sculpture, and pillow fights, and wine. Once again the experience was more important than what movie we were watching. And no, I will not be including pictures of the pillow fights.

So with all of that Twilight related fun under my belt I was honestly and genuinely surprised to find the second movie (New Moon) to be so much worse than the first one. Maybe it was because I knew what to expect. Maybe the Twilight kool-aid wasn't flowing quite as strong as it had been. After all, by that time the books were over and I had moved on to my excitement over the last Harry Potter movies. And when the third movie (Eclipse) came out in 2010 it was even worse. I mean, they were never going to be good movies, but this was getting ridiculous. By the time the fourth movie (Breaking Dawn) came out last year I couldn't even be bothered to see it in the theater (though I did eventually rent it, and it was just as awful as I expected). Maybe the the quality of the movies went down as the excitement around them went down. Maybe we knew what to expect, and that wasn't necessarily a good thing anymore. Maybe we just got older and more cynical (and becoming more cynical would be a tough thing for me to do). Whatever the reason we seemed to be done with Twilight. At least, until this year that is. 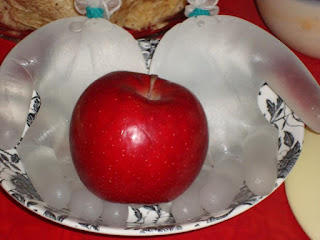 During the course of this year's Halloween party we came to the consensus that we would finish out this Twilight thing together. We knew it would be terrible, but as we planned on replacing the Twilight kool-aid with wine we hoped we'd be okay. There weren't nearly as many of us this time, but it was so much better than we expected. Sure the effects were still bad, and even the good actors were phoning it in, but somehow the fun returned anyway. All of the stuff that annoyed me about the last few movies became hilarious again. The crowd we were with was much younger so that might be part of it. We sure enjoyed laughing at them every time they screamed in shock or horror. Maybe seeing the Hunger Games earlier this year was good preparation. I don't know, and I don't care. Twilight got good again this year, and I don't give a damn what anyone else thinks about it. Not everything has to be thought provoking or art or even add value to the world. Twilight added giggling, an excuse for several girl's nights, and some hilariously harmless fun to my life. How can that possibly be a bad thing?