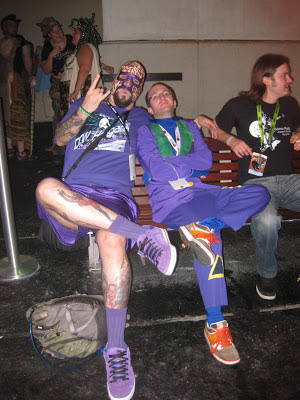 I’m posting this one now because I want to start next week – the first week of the new year – on a positive note. So my “Best of 2012” list will go up then.

But today I get to acknowledge all of the letdowns and disappointments that happened in 2012. This is always a tough list for me because I am fairly good at avoiding things that suck. Except restaurants, maybe.

Worst Movie – Sinister
This movie is strictly for Ethan Hawke fans. That’s because the whole thing is about Ethan Hawke and what a shithead he is. And his ugly sweater. Sinister is so boring and uneventful I can’t imagine anybody liking it. Every time you think, “Oh, man – it’s about to get good…” it doesn’t. And the monster looked stupid. And didn’t do anything.

Worst Ongoing Comic Book –
He-Man and the Masters of the Universe
This just sucked. It was another example of DC trying to reboot without rebooting. They want to take advantage of the history without being beholden to it and you just cannot create stories that way. This book couldn’t keep a creative team and quite frankly just didn’t feel like Masters. As Beau pointed out, the backgrounds just look like Earth. There is no sense whatsoever that this is Eternia. Much like the much-overhyped 30th Anniversary itself, this book just fell flat. 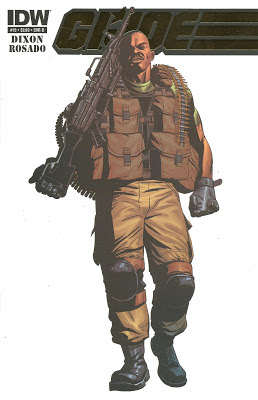 Worst Story Arc in A Comic Book –
Post-“COBRA Civil War” GI Joe
Man did IDW fuck up. They hooked me so good with the whole “COBRA Civil War” arc and then fell into the same fucking trap every other GI Joe narrative has – they did a cheap de-powering of the Joe team and made them outlaws/fringe/operating outside the government. And I absolutely stopped giving a shit. Seriously – I dropped every single GI Joe title because it just wasn’t good. And apparently a lot of other folks did too, because IDW is rebooting in January. I’ll pass.
Worst Thing I Saw –
Black Guy Nose Video on Tosh.0
I gag every time I even think about this, so now I am sharing it with you. Don’t watch it. Seriously:

Worst Thing on TV – Home Improvement Shows
Is there anything worse than false hope? All these shows do is make women dream of nicer houses than they can have. And they make it seem reasonable that we can all make these things happen by ourselves. Every single day, all day long these bullshit shows feature ruggedly handsome males and even more ruggedly handsome females converting 10 x 12’ closets into five hundred square foot hot tub rooms or gigantic kitchens with marble counters and stainless steel fixtures or hanging gardens or some shit. It’s disgusting. There is no such thing as a “Do-It-Yourself” home improvement project for regular people. There are “Try-It-And–Then-Call-A-Professional-Carpenter-To-Fix-The-Massive-Hole-In-Your-Ceiling” projects.

Worst Wrestler – The Great Khali
I guess? I dunno. I haven’t been paying that much attention. I think I saw him the other day, though. I haven’t noticed Sin Cara blowing spots anymore and it even looks like they stopped using that urine-colored lighting when he wrestles. So yeah – Khali it is.
However… due to a conversation I had with Mrs. Troublemaker a few weeks ago, I now proudly present the Phantie for

Absolute Worst Wrestler of All Time –
Nathan Jones
After returning the mic I accidentally pilfered from Club Famous back in November, me and the missus were discussing wrestlers in the car. She asked me out of the blue who was the worst wrestler ever and I – without a moment’s hesitation – said, “Nathan Jones”.
If you don’t remember, Jones debuted in WWE back in 20002 and wowed everybody by having a bad match with Bill DeMott. Bill DeMott – one of the acknowledged best trainers in WWE – did not typically have bad matches. He didn’t win them, but they were always solid. Jones was not. After that he got teamed up with Undertaker. I suppose the logic was that if you teamed somebody terrible up with somebody amazing you might get something okay; and as we all know from watching WWE’s current televised product they are perfectly fine with “okay”.
This did not work, either.
Jones was so terrible they had to pull him from the scheduled tag team match with him and ‘Taker against A-Train (now Tensai) and Big Show. Jones was taken off of TV and returned after months of training to once again be not very good at all. He left WWE shortly after while the company was touring his home continent of Australia.
I suppose Jones is so memorable because he received two massive pushes from WWE and was in no way a competent wrestler or enthralling entertainer. He botched moves, had bad timing, and couldn’t cut promos. The sad part is that it really isn’t his fault. It’s WWE’s fault for deciding to back somebody who simply was not capable of performing at the level they were suggesting.

Worst Toy Line –
Hanna-Barbera by Jazwares
I base this solely on the fact that two of the four figures we bought from this line broke within a day of being opened. I bought the 3 ¾” scale Tom and Jerry figures for Lil’ Troublemaker. Tom’s arms fell off with a minimum of play. I did go back to Toys R Us and purchase the 6” scale Tom (a better fit for Jerry anyway) and he’s doing fine.
The Space Ghost is a mess. Not only did his crotch break in two when I tried to move his legs, he’s just one of the worst executed figures I’ve seen in a while. But we’ll get to that in a minute.
I understand that two broken figures might not seem significant, but with a fifty percent failure rate I can’t imagine why I would purchase more. The Masters of the Universe Classics line may have had some problems last year, but I don’t have a single figure that is unusable. 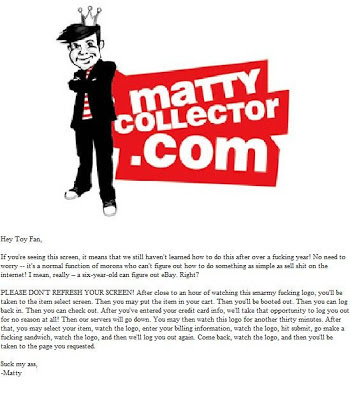 Worst Online Store – MattyCollector.com
Who else could possibly earn this ignominious distinction? While there have indeed been slight improvements over last year, Matty still has terrible communications with their customers (not “fans”) and the site itself is laughable. It’s a glitch, flash-based thing that often has an intrusive ad in the top right corner that “folds over” and gets in the way of the main menus. The “Search” function does not. The archives have been “upgraded” to the point where it is easier to type “Masters of the Universe Classics Dekker action figure Mattycollector” into Google than to look for Dekker on the site. And while ordering is not nearly as frustrating as it was two years ago, it is still very frustrating. The White Screen of Death is omnipresent every sale day and the addition of a Captcha – the worst thing ever to come out of the internet - is just terrible.

Worst Website – IDW's site
If you want an up-to-date, comprehensive listing of IDW's current and past releases, you might as well go fuck yourself. Because their website is not going to help you for shit. It is unnavigable, the search function doesn't, and it's just a big mess. When I do my Comic Book Updates I either scan IDW titles or avoid using pictures entirely because you sure can't find anything on their site.
Worst Song –
Any song that plays on Atlanta’s 105.7, but especially “Moves Like Jagger” by Maroon 5
I had to fight the temptation to feign ignorance of the title of that abominable fucking song. But I know it. I know it all too well. The co-worker that I’ve mentioned several times over the past year liked to listen to this station just loud enough that it was clearly audible to me. And yeah – I asked him to turn it down. But he’s Dwight Schrute if Dwight Schrute was way more annoying.
The music that this radio station plays is the worst, most soulless pop garbage available. Every song makes me seethe with a white-hot rage. I have never found a form of music so intolerable, not even modern “country”.

Worst Restaurant – Elmyr
(picture from Tim R. on Yelp.com)
I’ve never had a waiter that was actively an asshole before. And as many times as I’ve said, “We’ll never eat here again” I didn’t realize I had never truly meant it until I said it at Elmyr.