“Calm Like A Bomb” Pandora is the toughest woman I have ever seen inside of a wrestling ring.
That’s not hyperbole. That’s fact.
I have to admit, the first time I saw Platinum Championship Wrestling at the Masquerade I didn’t have a very high opinion of women’s wrestling. Let me be clear – I said “women’s wrestling”, not “women wrestlers”. At the time WWE and TNA were both doing pretty shitty jobs of managing their women’s divisions. You know, kind of like they are now. There was definitely talent in both companies – Gail Kim, Beth Phoenix, Nattie Neidhart, Mickie James, and Tara just to name a few – but they were typically only used well for a few weeks at a time, if at all.

And as far as indie wrestling shows went I had been taught to expect one of two things: scantily-clad girls who did a lot more flailing about and screeching than actual wrestling; or ladies who were barely distinguishable from the male wrestlers who were really good at punching and not much else.
So when an intense-looking white girl in some shredded tights and an equally intense-looking black girl came out to the ring I was not overly excited.
Then they started beating the ever-loving shit out of each other. 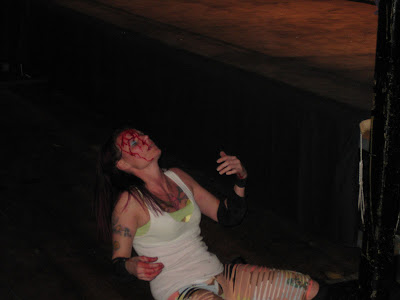 Pandora and Aisha Sunshine feuded pretty regularly for the next year, and to call it epic would not be overstating things. As a matter of fact, I would go so far as to call it the most successful feud to date in PCW. Every single match between the two women was not only good but better than the last. And I’m not talking “good for women”, I’m talking straight-up good matches. Quite often the biggest draw on the card for me.
But that’s not all. Pandora also has a habit of getting herself involved in men’s matches. As in, competing in them. One of the first I saw was a three-way with her, De La Vega, and Vandal. The match was solid and the endgame was all about Pandora. Since then she’s been involved in other mixed gender matches and battle royals and always manages to make an impact. She’s always at the center of things, as Pandora was one of the constant figureheads of PCW during the Empire’s takeover of the company. Every night she would speak or act on behalf of the remaining Platinum Championship Wrestling supporters.

A) I'm Pound 4 Pound the toughest chick in professional wrestling every day.

A) Lita cause she brought a different style to women's wrestling and cause she showed that she could do everything the guys can do and most of the time better.

A) If my dream dude is considered a monster it’s Michael Myers vs. Jason.

A) Again baddest and most brutal chick on the wrestling scene why wouldn't I be involved?

A) Christian Bale cuz he can take on any role and kill it...

A) The love the Passion and the brutality of it.....   got a lot of built up aggression and I love taking it out in the ring and not getting in trouble with the law for it..
Plus I love hearing the boo's or cheers from all those people  cause no one is ever quiet when I'm in the ring.

A) I want to have a dream match and I want to see my protégé NINA along with a few others make it in the business so I can feel like I helped other people live out this dream.

A) Exorcist unless Rob Zombie remakes it cause it’s a classic.

Pandora has been a villain and a fan favorite in the time since I’ve been watching her career and has been successful as both. Regardless of her allegiances, Pandora puts on a heck of a show. She’s entertaining, brutal, tough, and – most importantly – has that factor that makes you want to watch and see what she’s going to do next. And what she’s going to do next is beat some ass this Friday night at Monstrosity Championship Wrestling. This might be the only environment that could produce an opponent vicious enough to give Pandora a true challenge.

TOMORROW NIGHT Monstrosity Championship Wrestling comes to Club Famous in Atlanta, Georgia. There will be monsters, zombies, wrestlers, and rock n’ roll. No other show will entertain you in the same way and I personally guarantee a good time. I’ll be there as the ring announcer, Professor Morte and Chuck Porterfield will be commentating, and competitors from all over the world and every plane od existence will be brutalizing one another in the squared circle.
Also, there’s beer. Be there.