The first time I really became cognizant of Casey Kincaid was during a match that was part of his Phantom Invitational. It was against Vandal, who at the time was still getting his shit together (it’s together now). Kincaid was still under the Phantom hood and had been a part of every PCW show I’d seen at the time (which probably numbered less than ten – I will always regret not being able to see more of the shows in Avondale). But this match was awesome. I’m not going to say Vandal was bad, but he wasn’t where he is now. And it was apparent that Phantom was making the match awesome. Don’t get me wrong – Vandal was doing everything he was supposed to do. But Phantom was the guy running the show. And I realized at that point that every match I’d seen him in had been that way to one degree or another. I had to do a sort of mental inventory and go, “Shit – this guy is always good.”
Eventually Phantom dropped the mask and started wearing face paint. This was a great move because Casey Kincaid has one of the best working faces in the business. 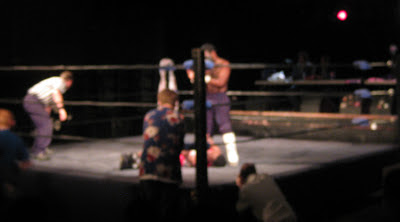 (I know that picture is terrible, but it's from the night Kincaid got rid of the mask)
Here’s the thing about wearing a mask – it makes you unrelatable. You have something iconic and instantly recognizable about you, but you have completely obscured the one sure way to convey your intentions. I’ve had several people tell me that the mask is alienating. I can’t remember who it was – maybe Lori Muffinface – but somebody told me they can’t talk to me when I’m wearing it because they can’t tell what’s going on with my face.
So Phantom got rid of the mask and suddenly you could see his face and realize this – the guy looked crazy as fuck. Where before you could enjoy the quality of his matches, now you could actually see what was going on with the character during them. It was a huge change and really made me a fan of the guy.
Eventually he dropped the facepaint and even more of Kincaid’s natural character and charisma came through. The guy was an intense and talented wrestler who made every match he was in no matter where it was on the card seem important. At Platinum Championship Wrestling’s Sacred Ground Chapter III he took part in an awesome match against Jay Fury and Fred Yehi that I really wish I had a video of. As good as every single match on that card was, that’s the one I keep thinking about and wishing I could watch again.
This Friday night at Monstrosity Championship Wrestling you have the opportunity to see Kincaid compete in an environment like no other.

1) What makes you monstrous enough for Monstrosity Championship Wrestling?

A) I'm a terror in the ring. Simply, I'm like Michael Myers in Halloween. John Carpenter version ONLY!

A) I had a few. But if I had to pick, I'd go with my old Thundercats Lion-O figure, with light up eyes!

A) Either AC/DC's Powerage or Pantera's Vulgar Display of Power

4) Who is your favorite wrestler?

5) What's your beef at MCW on November 16? Who should be trembling in fear?

A) Beef? I only eat beef when I need to be fed. As for who should be trembling? ANYONE in front of me. No matter who they are!

6) What would be your monster dream match?

A) I don't really think that way. I'm wired to just go. Every single match. Don't know why they call them dream matches. I usually give my opponents nightmares.

7) Monstrosity Championship Wrestling is widely known as the most grueling event in professional wrestling history – how do you prepare for such a nightmare?

A) I'm not a normal being. I don't think I'm human, frankly. My mind is ALWAYS in some other place. Thinking. Plotting. Waiting. So preparedness is always there.

8) How did you become involved with MCW?

A) Through Platinum Championship Wrestling. Which can be seen every 1st and 3rd Saturday in Porterdale, GA. But, I digress. Through PCW, I met the mastermind behind all of this. And when he asked if I wanted in, I let the bloodthirst do my talking for me. I get around. And word came by that, whosoever was in charge, wanted yours truly to bring his grindhouse act back to MCW and show what I could do all over again. Who am I to deny anyone?

A) There's a song by DOWN that I love and it sums that up perfectly. "There's something on my side". I can't explain it. Why do marine biologists go under the sea? Why do others become prize-winning pugilists? Or some adult film stars? I simply do what I'm wired for.


11) What is something you cannot wait to see or have more of?

A) Opportunity. BIG OPPORTUNITY. I want gold! I want silver! I want accolades! I want it all. But I want absolute victory the most.

A) There are plenty, but Hollywood has either made them anyway or are probably planning to. Thanks you pricks!

13) Closer – can you cut a sick and twisted promo for Monstrosity Championship Wrestling on November 16th?

A) It's simple. To come against me is folly. Miracles happen to me, tragedies befall others. And ye, thou shall rise against me like I was a mere child. But I am blessed. From below or above, that is the question. But it matters not. To rise against me is doom. I will render them useless, the bodies. I am a walking screaming hell. A thing of torture to behold. I'm the ripper, tearer, slasher, bruiser! Their bodies will fall. Their blood will be the mortar. Their bones will be my throne. Their eyes will stud my crown. And they will know me by the trail of dead.


Holy shit. I don’t know who will be pitted against Casey Kincaid this Friday night at Monstrosity Championship Wrestling at Club Famous, but I pity them.

Come on back tomorrow for a Very Special Mystery Q&A!
(This isn't the match I saw, but I thought it was appropriate)