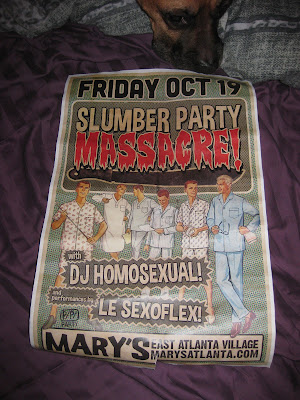 This one originally started out as a little history of how I came to love the funky ball of tits (and dongs) from outer space known as Le Sexoflex.
Side note: If you don’t get that reference, you really need to Google “funky ball of tits from outer space”.
But, much like the mighty cock when confronted by cosplay pictures from Dragon*Con, that post grew out of control and became its own entity. I’ll be holding onto that one, Tantric style, waiting for just the right moment to release and douse you all with wordy goodness.
Today I’m just going to talk about the awesome experience of finally getting to see Le Sexoflex perform live, as well as meeting a few of them.
Le Sexoflex’s Mixxxtape “Invagine the Pussibilities” is one of my favorite things ever. It’s not the sort of music I would usually listen to – lots of techno and pop-influenced music – but it is so well done it cannot be denied. In scouring the internet for all things Le Sexoflex I found references to past Le Sexoflex shows, as well as a few videos. The shows looked like an awful lot of fun and definitely something I wanted to experience. One of those unique sorts of things you just can’t recapture by way of an album. Kind of like seeing GWAR or Cirque du Solei. Kind of both, now that I think about it. Maybe with less bodily fluids. Or not.

After that I got a text from the Queen of Crunk saying that she and Bear were on their way, but they were stopping to eat first at Elder Tree. Mrs. Troublemaker had mentioned beign hungry and Le Sexoflex had said they weren’t going on until 11:30, so we walked across the street for some food.
I am pleased to report that Elder Tree had good service, was clean, and had great food. Perhaps most importantly, the music was low enough that we could actually hear each other converse. I tired curry for the first time in my life because it is obviously a good idea to take gastrointestinal risks when you are spending the rest of your night out at a club. But I was fine and whatever the two sauces were that came with my fries were rad. I think the dish was called Duck Fries With Curry Sauce. I was seriously stupid for taking a chance, but I’m glad I did. I think I might be ready to try some Indian food now.
When we got back to Mary’s it was fucking packed. I couldn’t believe the difference in volume of customers that had occurred in less than an hour. We went back upstairs and hung out on the balcony, where we were offered Jell-O shots by one of the many extremely friendly folks there. And that’s one of the things I really dig about Mary’s – everybody is so darn nice. And no – I don’t mean that in a naïve, “Oh, they were all buying me drinks and offering free prostate exams!” kind of way, I just mean everybody was cool. No weird looks or that odd aura of elitism that radiates off of certain groups of people in every bar or restaurant you go to in Downtown Atlanta. Of course, everybody was also much more naked than in most bars.
I was standing next to Lori on the balcony and she leaned over and said, “I think they made it too dark in here; it looks like somebody ran through and stole everybody’s shirts,” and I replied, “Yeah – and distributed beards.” At which point I realized how well I fit in.

You see, I don’t normally sport a full beard. I stick with a sort of jaw-warmer that goes from one earlobe to the other. But sometimes for Winter I grow out my sideburns and mustache and sport a full beard just to be different. And I am currently going beardus maximus for my Halloween costume. Which means both time I have been to Mary’s it just so happened I was sporting the look I think of as Mary chic. I mean, I had my shirt on; but I was fitting in pretty well.
And I’m not going to say I wasn’t a little bit flattered when the bartender downstairs recognized me. No, no – not from earlier in the night. From last Christmas. That’s right. That’s how good I look. With a beard.

Anyway, before too much longer Miss Lady Flex and Peep Peep started hovering around DJ Homosexual’s perch in the DJ booth. It looked like shit was about to get real, son. I didn’t know what the sound quality was going to be like and the lighting seemed terrible, but they had told me they were doing three new songs for the first time live and there was no way I was going to miss recording them. It’s one thing to go to a Mastodon show and record the seven hundredth time they play “Blood and Thunder” (which I did and it was actually pretty awesome), it’s another thing entirely to be in a small venue recording the very first time a group as unique as Le Sexoflex kick out some new jams.
There was no stage or anything, so the Sexoflexers just grabbed a couple of mics and did their thing at the front of the dance floor, surrounded by dancing patrons.
I don’t know the actual names of any of the songs, but you can probably guess from the choruses. The first one was about having sex. Surprise! Miss Lady Flex walked around the front of the crowd, asking, “Mind if I sleep with your boyfriend?” to various dudes. I think this one might have been called “Three’s Company” and could, possibly have been about threesomes. I’m not musical analyst, but that’s my guess. Peep Peep came in after a few minutes and dropped a couple of verses. Both he and Miss Lady Flex were fun and full of energy and it was really cool to see that girl up in front of a bunch of people performing like that after what she’s been through the past year. I don’t often get inspired, but that was pretty inspiring.
The next song was a Halloween song about necrophilia because of course it was. I was really enjoying this one when all of a sudden Vas-D came out of the crowd and joined in out of nowhere! I didn’t even realize he was there, so it was a really awesome moment. Peep Peep passed him the mic and he laid down some silly sex rhymes.
The last song might be called "I'm A Slut". You be the judge.
The only way to make the video watchable was to convert it to this black and white that makes it look like a snuff film from 1932. Or maybe like ti was made over a parking lot’s closed-circuit TV system. I dunno. But it’s the best I could do. The sound isn’t great, but I’ve heard (and posted) worse:

I can’t even tell you how awesome it was to be there and see this live. I probably would have had even more fun if I had been down there on the dance floor, but like I said – I had to get footage. I felt like this event deserved to be captured on video, even if the quality wasn’t as good as I would have liked. But the quality of the performance was awesome. The beats were as good as ever, the rhymes were sick, and everybody was full of energy – nobody was phoning it in.
Oh, and after the show I found the illustrious Vas-D hanging out on the proch:

I highly recommend you keep an eye on Le Sexoflex’s Twitter, Facebook, and Tumblr pages. They announced at the show that an all-new Mixxxtape would be coming in January(ish) and I’m really hoping that there are more live performances planned, maybe at a venue with a little better sound and lighting. Don’t get me wrong – Mary’s was the perfect place for the grand return of the sexiest Band In The Whole Muthafuckin’ World. But now my appetite has just been stoked. I want to see a full set in an actual music venue.

Stay tuned – if everything works out I will have a lot more Le Sexoflex coming soon!

11:00 AM – 1:00 PM – Hot Set – I still endorse this show. The torture chamber one was really cool and I’m curious to see what other kinds of things they come up with.
Halloween score – 3
Quality score – 3
2:00 PM – 10:00 PM – Face Off – Out of everything on SyFy’s 31 Days of Halloween, this gets my highest recommendation. It is a truly fun show to watch and the contestants are not only talented but very nice. Everybody helps everybody else. I think Face Off’s cast sets a new standard for what a reality show can be. The competition is friendly and healthy and quite frankly a bit more interesting because you kind of want everybody to win.
9:00 brings the newest episode – “The Scene of the Crime” and I’m dying to see exactly what that means. We’re down to the final four contestants and they are all extremely talented. They’ve been teasing the judges getting a little tired of Roy’s work, and Nicole and Laura are both fantastic. Derek really shined in the cyborg challenge last week, but we’ll see if he can continue hanging in there. He’s my pick to be cut this week.
Halloween score – 4
Quality score – 5
10:00 PM – 11:00 PM – Hot Set – “Super Villain’s Lair” – this new episode has the potential to be even more interesting than last week’s.
Halloween score – 3
Quality score – 3
11:00 PM – 12:00 AM – Face Off – A repeat of 9 PM’s new episode.
Halloween score – 4
Quality score – 5

Come back tomorrow for 13 Questions with a band that makes me want to sit on my porch on the bayou at dusk and sip Jack Daniels while watching for vampires and zombies – Southern Gothic Revival!