I was pretty sure Southern Gothic Revival was going to be yet another metal band. Don’t get me wrong – I love metal. I always have. But there are only so many local metal bands you can really get behind, you know?
I first met Beau’s wife, Sally, back when we both worked at Wherehouse Music. Sally is literally the nicest person you will ever meet in your life. I am not being hyperbolic. I have never met anybody as sweet as that lady. We worked together for a little while before I transferred stores and I maybe ran into her a couple times after that.
A few years later it turned out Mrs. Troublemaker knew Sally and we ended up hanging out with her and Beau. Beau was in a band and Beau kind of looks like a metal guy, so I resisted checking out this “Southern Gothic Revival” for a while. Then, one night when I was tooling around the internet, I finally decided to watch this:

Whoa. That’s awesome. And decidedly not metal. Or punk, for that matter.
SGR was playing something cool that wasn’t quite like anything I was listening to at the time. I’m not much of a fan of slower music, but the atmosphere and tone of the song just grabbed me. I immediately went and downloaded their album, which is available from iTunes and (other?). Their self-described “Bordello blues, voodoo rock, and smoky jazz” is honestly just one of the coolest sounds you’ll hear. I want to draw a comparison here, and the only music that comes to mind is Prince. Now, they sound nothing like Prince, but SGR’s sound defies genre in exactly the same way. Much like the tiny purple maestro, I would never dare to lump Southern Gothic Revival into a category. They are their own thing.

1) Where were you born and what is one way that place has affected you as a person?


A)Sumter SC.I learned how to entertain myself due to the fact we were in the country...to this day I don't mind being by myself.


2) What was your favorite toy when you were a kid?


A)GI anything and I pretty much had it all.


3) What is one album everybody should own?


4) What are your thoughts on Halloween (the holiday, not the movie)?


A)It's more of an adult holiday than when I was a kid and it just seems that more and more people are getting into it.


5) Speaking of movies, what is your favorite scary movie and why?


A)The Shining. There’s nothing scarier than seeing Jack Torrance’s character coming unraveled. There’s a lot of subtle things in that movie that stick in your head.


6) Who is your favorite wrestler and why?


A)Black Jack Mulligan. He wore black and kinda had this outlaw thing going for him. I just thought he was badass.


7) What is the best Halloween costume you've ever worn?


A)Peter Criss when I was a kid.


8) How did you become involved with Southern Gothic Revival?


A)Me and Geoff Efaw started in it just sending ideas via email...I though it had a very different sound that didn’t sound like we were trying to be different.


9) Which actor do you feel like you could sit and watch for hours no matter what they were doing and why?


A)Morgan Freeman. When you watch that guy you never at any point think he's acting...he's just that good.


11) What is something you cannot wait to see or have more of?


12) Is there a movie that should never be remade and if so which one?


A)I don't think any movie should be remade. Come up with your ideas and stop rehashing movies that have already been done.


13) Closer – can you tell me about and sell me cold on your current project?


A)Southern Gothic Revival is different than a lot of what’s out there and through the years we have become a great live band that puts on a great show. There’s no drum machines or backing vocals or any of that shit...we reflect what we are and where we come from and it's one of the things I’m most proud of in my life.

You can catch Southern Gothic Revival at the Sweetwater Bar & Grill in Duluth, GA on December 15th. You can follow ‘em on Facebook, ReverbNation, and last.fm.
You may download “(album)” to stick in your Halloween playlist (and should), but I guarantee you’ll end up listening year-round. Come dusk, go pour yourself a glass of your favorite liquor, have a seat on the porch, and listen to some SGR.

11:00 PM – 8:00 PM – Paranormal Witness – I guess I’ve talked about Paranormal Witness about as much as I can. Instead, I’m going to talk about Ghost Busters. Not the Bill Murray/Dan Aykroyd/Harold Ramis/Ernie Hudson Ghostbusters or even the Lorenzo Music/Maurice LaMarche/Frank Welker/Arsenio Hall Ghostbusters. And definitely not the fucking Extreme Ghostbusters. I’m talking about these guys:

Check back next week for more. I just decided I can get a whole post out of this.

11:30 PM – 12:30 AM – Ghost Hunters – I didn’t mention it back then because quite frankly I don’t care, but this is a repeat of a new episode that was shown at 9 PM called “Fear Factory”. I’m fairly certain it won’t have anything to do with this:

2:00 AM – 4:00 AM – House of Bones – Remember – this is actually a fun one. And it’s been more than two days since they played it! Here’s a nice picture of the lovely Charisma Carpenter to celebrate: 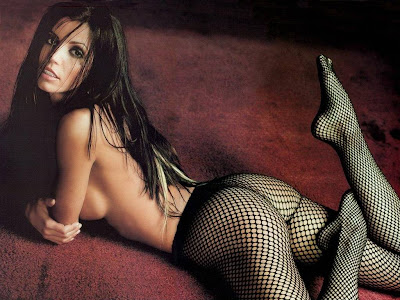 4:00 AM – 5:00 PM – Ghost Whisperer – I may get tired of talking about Ghost Hunters, but I certainly never tire of the delightful Ms. Jennifer Love-Hewitt.

5:00 AM – 8:00 AM – Paid Programming – Okay. Now I can actually reference an infomercial. The damned… I mean, informative and profitable… things started early the other day and I was treated to a ridiculous contraption called the “Jaw Saw”. The main selling point of the Jaw Saw seems to be that you do not have to be careful with it, despite the fact that it consists of two massive, serrated pincers and a fucking chainsaw blade and looks like one of Trap-Jaw’s arm attachments. Seriously – one of the big talking points of the ad is that regular chainsaws are not good because you have to be “extremely careful” with them. Meanwhile, I’m sure you could just hand the Jaw Saw off to a toddler and have him prune your whole backyard while you down a case of Stroh’s. I am hoping that by next year SyFy will have convinced the makers of the Jaw Saw that its only real value is as the centerpiece of a new SyFy Original horror franchise – Jaw Saw: The Jaws of Death.

9:00 AM – 11:00 AM – Headless Horseman – This is a modern day take on the Washington Irving story, which sounds awful. And it would be except for one thing: Richard Moll. Heck yeah.

Come back tomorrow for a creepy new toy review!