31 Days of Halloween: 13 Questions With Alucard 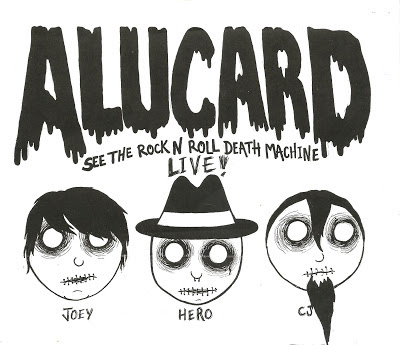 I met these guys at the Calabrese show at Dragon*Con this year.
They’ve got tattoos all over their necks and hands and everything and I thought they looked like stabbing enthusiasts, so I kept my distance. Bot not too much, because this was Dragon*Con and everybody’s cool there and also because there was no way I was going to be anywhere but right up front.
Over the course of the show I watched as Joey and Hero sang every single word to every single song; even the stuff from Dayglo Necros. I thought that was pretty darned impressive and I told them so.

After the show we met up again at Calbrese’s booth and they told me that seeing Calabrese a few years earlier was what had inspired them to form a band. I told them I understood exactly what they meant, as it was a marathon of Calabrese albums that inspired my songwriting kick a few months ago. They gave me a copy of their second album, Rock N’ Roll Death Machine and I told them I would probably be interested in doing a Q&A in October.

It took me a little while to listen to Rock N’ Roll Death Machine, but I totally dug it as soon as I did. It has a very lo-fi, seventies punk feel and the songs are all about horror stuff. I immediately put it into my Halloween playlist.
I’ve been chatting with Hero from time to time over the past month and he was good enough to send me a copy of their first album, Vamp City Rockers. Sometimes it’s a little rough going back to a band’s earlier work when you are already familiar with something new, but Vamp City Rockers felt like a natural lead-in to Rock N’ Roll Death Machine. The albums definitely share a continuity, much like Calabrese’s work. Or AC/DC’s, for that matter. There is a certain quality that lets you just kick back and enjoy what’s going on.
Here are Hero Bishop and Joey Gruesome of Alucard:

1) Where were you born and what is one way that place has affected you as a person?

Joey - I was born in Lebanon, Tennessee. I'd say it affected me as a musician because the first time I ever saw a real (expensive) drum kit was at a place called mikes music and pawn on the square in Lebanon.
Hero - Taft, California. I think it got me exposed to punk rock at an early age. I went to Jerry's Pizza when I was 13. That is in Bakersfield CA, it was my first punk show and it changed my life forever!

Joey - I had a big T-Rex toy from Jurassic park best thing ever!
Hero - It was a big stuffed monster and I think it was like purple and green with orange chains. I'd have to call my Mom to see what it was called haha maybe a monster buddy?
Side Note: I immediately recognized this one and sent Hero this ad:

Joey - Besides anything Alucard does? Ha! I'd say "Lifted" by Bright Eyes or the Bat Out of Hell trilogy by Meat Loaf!
Hero – “The Travelling Vampire Show” by Calabrese!

4) What are your thoughts on Halloween?

Joey - dark.... Ha! It's a great excuse to party!
Hero - I fucking love Halloween! I have a lot of Halloween related tattoos and well.....who doesn't love Halloween?

5) Speaking of movies, what is your favorite scary movie and why?

Joey - the Rocky Horror Picture Show, you've got a cross dressing Tim Curry and a music number from Meat Loaf what more do you want?
Hero - American Psycho because it is hilarious!

6) Who is your favorite wrestler and why?

Joey - Zack Zero! He's a pimp
Hero - Macho Man because he reminded me of my Dad.

7) What is the best Halloween costume you've ever worn?

Joey - I had a bad ass real looking Jason X costume one year where he was all metal. That was pretty dope.
Hero - I once went as a woman while playing a Halloween show. A few people loved the chest hair coming out of the top of my dress.


8) How did you become involved with Alucard?

Joey - I found them through a craigslist add and once they heard my omega power drums they had to have me! Haha
Hero - After my hardcore band Vonnegut broke up due to dumb shit I just wanted to have fun and play Rock N Roll so I learned the mighty and simple two finger power chord – haha - and called up my pals to get it going. Note: I still only use two fingers haha!

Joey - Meat Loaf. Just because he's a god!
Hero - That is a tie between Christian Bale and Gary Oldman. I think their careers speak for themselves!

Joey - Mostly the zillions of dollars that Alucard makes ya' know but I guess part of me loves it too…
Hero - I just wanna have fun and live life. Playing Rock N Roll with friends is reason enough!

11) What is something you cannot wait to see or have more of?

Joey - Betty White.
Hero - People having a good time at our shows and digging the tunes!


12) Is there a movie that should never be remade and if so which one?

Joey - Jurassic Park you don't mess with success
Hero - American Psycho because no one can top Christian’s performance as Patrick Bateman.

13) Closer – can you sell me cold on your current project? 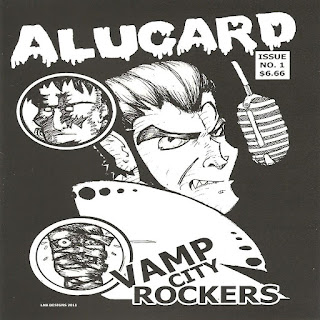 If you are looking for some good, garage-punk, horror rock n’ roll you should definitely give the boys from Alucard a listen:

11:00 PM – 4:00 PM – Ghost Hunters – I would like to point out the fact that I don’t actually have a problem with SyFy showing all of these Ghost Hunters episodes. I do think the show is terrible, but a whole lot of people do not agree with me and obviously SyFy should cater to the majority. Get those advertising dollars, SyFy. And make Sharktopus 2 with them.
Halloween score – 5
Quality score – 1
4:00 PM – 8:00 PM – Paranormal Witness – Oddly, I really don’t have much more to say about this show. Today’s block leading up to the new episode tonight includes “The Real Haunting In Connecticut”, Fox Hollow Farm”, “The Abduction”, and “Cabin/Ghost In the Garden”. They’ve all been shown recently, but maybe you missed them or they were so totally rad you wanted to watch again but couldn’t because you don’t have a DVR. Well now you can watch them again.
Halloween score – 5
Quality score – 3
8:00 PM – 1:00 AM – Ghost Hunters/Paranormal Witness – There’s another Ghost Hunters rerun at 8 – “Paranormal Politics”. I actually meant to watch this last week when they showed it, so if I remember I will set my DVR for this week’s (I won’t remember). Then at 9 is a new episode called “Curtain Call” followed by Paranormal Witness’ new episode, “Hollywood Sign Haunting/The Good Skeleton”.
Halloween score – 5/5
Quality score – 1/4

Come back tomorrow for the third series of S.L.U.G. Zombies!