I had a ridiculous Walmart experience the other day.
Now, let me go ahead and answer all of the smarmy, self-righteous assclowns that are going to say, “Well, that’s what you get for shopping at Walmart. I don’t ever go there.”
Shut the fuck up. You can take your bag of Whole Foods organic potatoes, your Starbucks Grande cup of Foggy Colombian Sunrise, your hemp sandals, and your all-natural granola imported from Zaire; not to mention your Portland microbrew, your ironic mustache, and your iPod Shuffle full of socially responsible music – take all that, turn those sumbithces sideways, and stick them straight up your candy ass.
Of course you don’t like Walmart. I don’t like Walmart. Nobody likes Walmart. But when you’re in a hurry or need a weird assortment of items - like, say, a Batmobile and some turkey jerky or heaven forbid some stupid toy company has foolishly made a figure you want a Walmart Exclusive - without driving all over fucking town; you’re going to Walmart. Or at least, I am.

So the other day I had to go to Walmart. I had stopped there what was apparently more than fifteen days earlier to buy something or other and bought an Alvin and the Chipmunks DVD for my son. Not those abominable live-action movies – the old cartoons. This one had some kind of superhero-themed episodes on it, with Alvin dressed as Batman prominently on the front. Like all little kids my son likes Alvin and the Chipmunks and he loves Batman, so I thought he’d really dig this. But I got it home and Mrs. Troublemaker told me we already had those episodes on another collection. Fucking double-dippers.
So I stuck it back in my car, knowing I would have to return to Walmart at some point and would just return it then rather than making a special trip.
Then Lil’ Troublemaker got his Boba Fett in the mail.
I can’t even explain what I was thinking, but back when Hasbro was offering the last mail-away Boba Fett – one that looks like the prototype costume – I decided to pass on it, even though I knew it was different and my wife was ordering one for my son. You see, I have a whole section of the wall devoted to Boba Fett, as well as a shelf of Mandos: 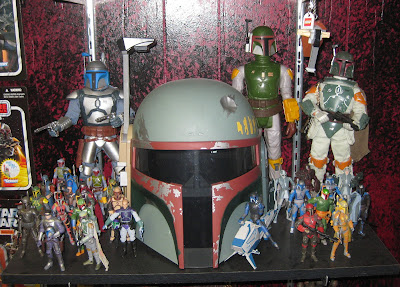 There's more, but the rest isn't all together like that and I don't think anybody wants eighty pictures here. It’s not everything ever made, but it’s a decent amount of stuff and I’ve tried to pay attention to what’s coming out when and buy any Fett stuff that I like. And I really like variations of Fett’s armor. I have no idea why I passed on this thing.
So it came in the mail the other day and it looks totally rad, if a bit similar to the concept figure: 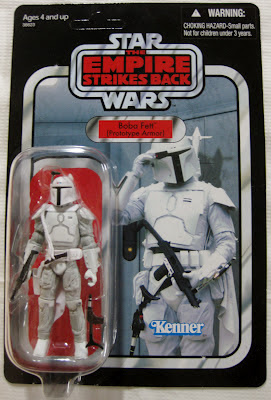 Email ThisBlogThis!Share to TwitterShare to FacebookShare to Pinterest
Labels: tales from the troublemaker