Dragon*Con 2012 - The Midnight Spookshow with CALABRESE! 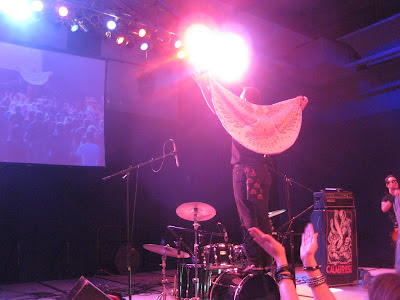 Day 3 Night
Yesterday’s post got lengthy. Today’s is going to be much more brief, not to mention aided by LIVE MUSIC VIDEOS.
So I put on my fantastic suit: 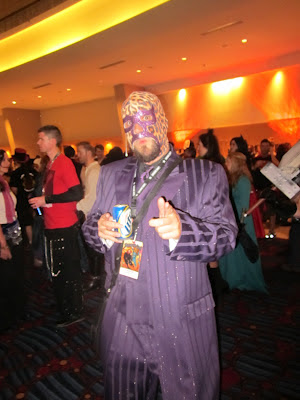 Now, obviously that mask is the shit. It’s easily my favorite mask now and nothing will change that. But the suit ran into a couple of problems.
We met up with Evil and Lady Evil in their room, then went to collect Monkey and his woman. I think Darth Pete was somewhere around there, too. Once the crew was rounded up we headed over to our normal spot in the Marriot to meet the rest of the gang. Mikall, The Big Guy, Gnoll, Sarah Conner, The Grand Hoff, and K-Dawg were already there, but the true stars of the show were Soozi and Little Pond:

An amazing Chicken Lady – fully in character - and the best Batwoman I have seen were just hanging out by the railing. I love that those two were in costumes. Not many of the Hooligans sport actual costumes, so it kind of takes something to go all-out like that. It made me wish I was wearing one of my actual Doctor costumes rather than just a suit, spectacular though it was. This was Problem One with the suit. Those two looked awesome and I just kind of felt like I didn’t.
There were a lot more cool things to take in before Calabrese took the Atrium Ballroom stage at midnight. This Pony, for instance:

Or Steve Zissou, who I took a picture of just to spite Gnoll.
Gnoll went off on two completely separate, unprovoked rants Saturday night. I don’t remember what the first was about, but it led me to hold up my empty beer can and proclaim I needed to get rid of it so I could wander off.
Side Note: Why the flaming FUCK does the Marriot not have garbage cans everywhere? The only ones there are behind the little side bars and they’re tucked away like they don’t want you to use them. It’s absurd. I don’t want to be an asshole. I don’t want to just leave my empties sitting on the floor or tucked into a plant or thrown on top of the elevator. But damn – that place just does not want you disposing of your garbage in a responsible manner. But at least it gave me an out from Gnoll’s irrational discourse.
Gnoll’s second bizarre rant was about Wes Anderson. Me and Little Pond both got caught up in this one somehow. Gnoll does not like Wes Anderson. To quote, he thinks the director is, “An overrated piece of shit.” I personally do not agree, but everybody is entitled to their opinion. Saturday night Gnoll felt everybody was entitled to his opinion. Fair enough. I kind of needed to pee anyway. On the way I saw this guy and relished taking the picture:

But not as much as I relished the aquatic life I came upon next:

That’s right, Phantomaniacs – FUCKING SHARKTOPUS. I was ecstatic. The only thing that would have been better than Sharktopus would be…

HOLY. FUCKING. SHIT.
What more could I possibly need out of Dragon*Con?
There was some more good stuff, but the climax… er… the peak of the night as far as costuming was definitely Moira the Ghost Maid.
But here’s some other good stuff:

And then the unthinkable happened. Something I literally never would have imagined was possible. A thing that constituted Problem Two with the suit and a thing that could not be blamed on me or the suit itself.
This fucking guy showed up:

ARE YOU FUCKING KIDDING ME!?!
Yes. This asshole is wearing the same suit as me. Not only at the same Con. Not only on the same night, at the same time. In the same damn hotel on the same floor. What are the fucking chances of that? I feel like I handled it very well, but I was pretty crushed. And not only did this guy show up wearing my suit, he was claiming he was in a Joker costume. What the fuck? Let’s look at that picture again:

He also said it like it was clear. In the same way that a guy wearing a brown robe and holding a lightsaber might tell you he was a Jedi. Like it was some obvious shit or something.
Argh.
Eventually he wandered off and it was time for Calabrese. Which presented Problem Three: a black preacher/pimp suit is not the best attire for a rock show. I felt out of place. But that one’s mostly my problem. I should have planned better, yeah – but it really shouldn’t have mattered. The real problem was the mounting Problems.
Still, Calabrese rocked it the fuck out:


That was an absolutely kickass opening and things only got better, as this combination of pictures and videos will reveal:


It was great, and I converted a number of Hooligans into Calabrese fans that night. 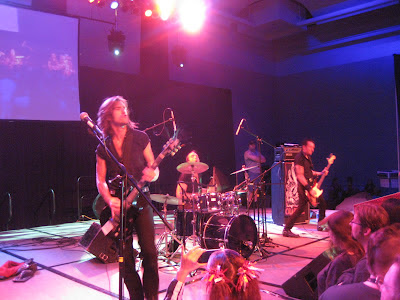 Calabrese puts on a show that is different from any other I have seen. The music is the most important thing. If you’re playing shitty music, no amount of on-stage personality is going to save you. So Calabrese starts out right by playing a brand of horror rock that is very nearly flawless. There isn’t a single song in their library that you don’t want to sing along to. So the music is covered. 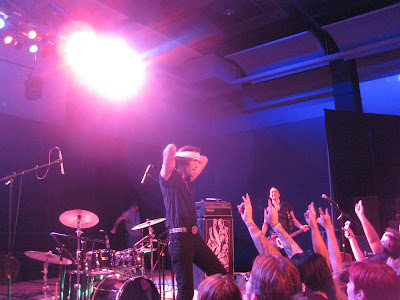 But then on top of that you have a bit of performance. These guys don’t just come out and play a bunch of rad horror rock songs. They could, but they don’t. They fool around. They have props. They have shtick. Over the course of the show, Bobby not only dons a kung-fu bandana and kicks his way across the stage Rob McElhenny-style, he also puts on a fucking space helmet and launches blazing guitar riffs directly into the audience. 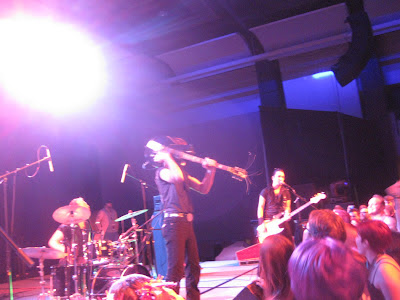 And Davey? Davey has an Elvis cape, as seen at the top of the page.
There are few moments during a Calabrese set where the band’s full range of abilities and personality isn’t on display, and the thing is they already conquered with the music. Finally getting to see these guys live was about as entertaining as I could have hoped for. I hope it isn’t another five years before they’re back.

Oh, and I know I could’ve gotten better shots in the video if I had moved back. I didn’t want to move back.
After the set was done, we headed back to the rooms to re-beer and change. I put on what is quite frankly one of the most ludicrous things I have ever worn: 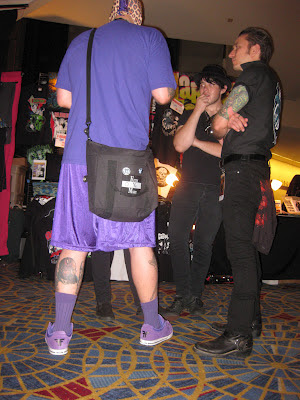 Nice, right? I was too drunk to care. Plus it was about the most comfortable I was all weekend. Naturally, this was the attire I chose to wear to go an meet all of Calabrese and have my picture taken with them: 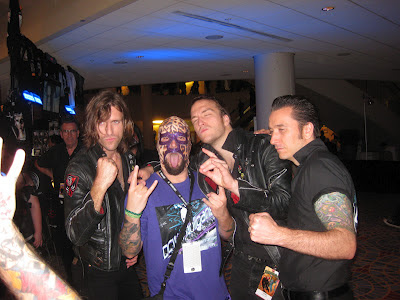 Yes! Rock and Roll!
A couple other guys walked up and joined in the conversation. Turns out they are in another horror rock band called Alucard and you should go check them out. One of the guys told me that seeing Calabrese at Dragon*Con five years ago was what made them get together and start making music. Pretty awesome. I get that. Calabrese are great.
Next we went to a shitty rave and I took some video of the floor:
What was with the raves this year? I totally missed out on DJ Spider Saturday morning – something I am thoroughly irritated about – because I was still on my karaoke high and also because everybody kind of called it a night early all weekend. But whatever was going on Saturday night just wasn’t very good. I appreciated the nice-looking ladies and all, but the music did nothing for me.
I do not remember this at all:

But I’d say it’s a good stopping point for today. Come back tomorrow for what will probably be a recap of Sunday and Monday, then on Friday I will review the
2012 Late Night Puppet Slam 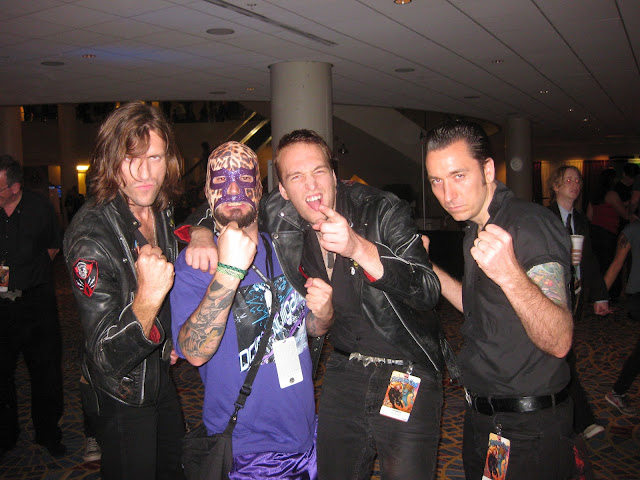