Stephen Platinum is the man we have to thank for Platinum Championship Wrestling.
Of course, I didn't know that the first time I met the guy.
- 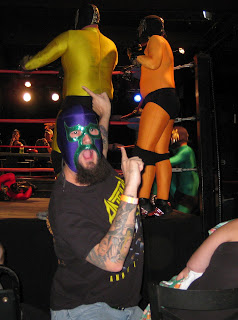 It was at the first or second PCW show at the Masquerade. I had just seen CAMPUS Strike Force wrestle... well, they were in the ring, anyway. But I had just seen all of these goofy, Power Ranger-looking masked wrestlers and I really wanted to get a picture with them. So I went to the little are that leads to backstage and caught the attention of this dude in a green track jacket. I figured he was part of the crew or something. I asked him if the masked folks would be around later to get a picture and he said they would. We chatted for a minute about wrestling. Then some music started playing and he said, "Oh, shit! That's me – gotta go!" and ran out to the ring.
I then watched the owner of Platinum Championship Wrestling cut a promo.
I went back to whoever I was at the show with and was like, "I was just fucking talking to that guy!"
So the first time I met Steve I made him miss a cue.
I've spoken with him a few time since then and actually got to hang out with the man for a few hours last year at Atlanta Zombie Apocalypse when we did Monstrosity Championship Wrestling, where I got to live a dream and be a ring announcer for one amazing night. He recommended a few books to me that I don't remember because I was just too fucking excited. But it was very cool hanging out with the guy and on that one night, in those few hours I got to pick the brain of a guy who has done and seen a lot in the business I love so much.

I could go on and on about how great PCW is. I did the other day. But the bottom line is that Stephen Platinum is the man that makes it work and is also a pretty cool guy. All the proof I need is that he actually did one of my Q&As.

1) What was your very first experience in pro wrestling?

A) The first I remember was watching Bruiser Brody tear through a crowd, swinging his chain. He beat up the guy he was wrestling, tossed the ref, then left through a different section of the crowd, leaving behind two paths of destruction through the crowd. Needless to say, Little League baseball didn't quite hold my attention from that moment on.

A) It was called the Colossal Fossil Fight, and had two plastic dinosaurs that would grab bones and put them in a cave. If you got the most bones in with the most points, you won. It was fantastic, and I'd kill to have that game again.

A) I should probably say something incredible, like some Beatles album or something. But for me, it's either Public Enemy's "It Takes A Nation of Millions..." or Black Sabbath's "Paranoid."

4) How did you become involved with Empire/PCW?

A) I started the fucker.

5) Can you tell me about your first Empire/PCW experience?

A) To be technical, that would have been years before the current version, when we took the show-formatted practices we were doing on Thursday nights and made them into a formal show. I dubbed those shows Platinum Championship Wrestling and we were off to the races. That was in 2006.

6) What would be your dream match?

A) I've actually lived most of those...wrestled Piper, Jake Roberts, luchas, and Japanese guys. I'd say Ric Flair, just because he was a huge influence. Wrestling the people I've trained in good matches was a dream come true as well.

7) What is your favorite piece of gear you’ve ever owned?

A) My Lethal Litigator black jacket with the red "Lethal Litigator" stitched in the back. It was the first bit of gear I bought once I had a gimmick and I still have it, unlike most of my gear that's been lost, destroyed, or lost in a bet (red shiny pants to Miss Rachael. Fucking Braves. Fucking St. Louis Cardinals last year.)

8) Sacred Ground is the Big One. How much is at stake?

A) Everything. My legacy. The future of wrestling in Porterdale.

A) Diane Lane. She's amazing. She can do shlock and be great in it (Judge Dredd, the first one). She can act without words better than anyone (Unfaithful on the bus ride scene). She is so freaking hot, and one of the few older women that I find really attractive. I know I'm supposed to say that women are beautiful as they age, but that shit ain't true. Except for Diane Lane and my wife.

A) Pro wrestling is where I feel like I can make a difference, and influence the business for the better, all while enjoying it.

11) What is the Empire's key to victory at Sacred Ground?

A) Finding a time machine and killing me and Mason in our respective cribs.

A) Most of them that are, honestly. But if they ever touch any of the following, I will kill -- Mother (Albert Brooks movie) Meatballs, or Shawshank Redemption. Even if they make them in 3D.

A) In this modern world, most of the time we all share an unforgettable event, it's a tragic one. OJ runs. Rodney King. 9/11. Sacred Ground may indeed wind up being the end of something beautiful. But it may also wind up being a celebration and an experience that can never be done justice, even though videotape. Sacred Ground might well transcend. To miss it will inspire regret. To see it will simply...inspire.

If you want to know more about Stephen Platinum and how PCW got started, you need to go and order a copy of The Booker. It's a tremendous look at indie wrestling.
I try not to be overly hyperbolic, but Sacred Ground Chapter III is the biggest night of wrestling ever for me. No WrestleMania, no Starrcade, no Bound For Glory will ever be quite the same. I have watched this company grow and have grown with it.
I've lost a lot of my faith in professional wrestling in the past few years, but PCW has been there to kindle the fires that started in my childhood. Seeing this family of athletes with such a passion for the business and such a desire to entertain has kept me invested. WWE doesn't do it, TNA doesn't do it. But PCW keeps me intrigued and entertained. If it ends I know I'm going to have to seek out an alternative. Because I still love pro wrestling and I have Steve Platinum to thank for that.
Be in Porterdale. Go see Sacred Ground. I guarantee it will be amazing.
-Phantom
Posted by Phantom Troublemaker at 11:00:00 AM