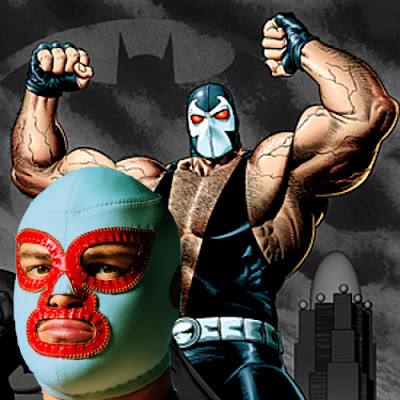 Welcome to the post where I speculate about who will wear what at the Southeast’s biggest and best nerd festival.
This is the third year I’ve done this post and I sure hope I’ll do a little better with my predictions than I did last year. I think a couple of last year’s picks are actually more likely this year – I guess I just overestimated the cosplayers’ initiative last time. But I feel pretty sure we’re going to see a bunch of Banes this year – especially with a store-bought costume readily available – and surely some brave seamstress will take on the plating and seams of the New 52.
Side Note: It occurs to me that stupid people are probably going to start mistaking me for Bane rather than Nacho Libre. As a matter of fact, it’s already happened once. I can only assume these people are color blind. And design blind. Oh, well – at least it’s a step up in mistaken identity.

I’m not sure this year in media has presented as large a playing field as 2011. Obviously The Amazing Spider-Man, Avengers, and The Dark Knight Rises are big deals. And Game of Thrones has become a powerful force in the kingdom of dorkery (yes – it is a kingdom. Joss Whedon is the monarch). But what were the lower key releases? I can’t think of a single horror flick with striking, recognizable characters. The Woman In Black and Cabin In the Woods were both excellent, but neither presented much opportunity for costuming. Or did they? 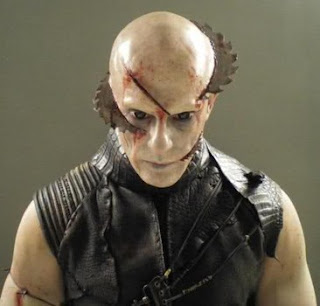 Cabin In the Woods
This is a total shot in the dark and probably extremely unlikely, but it would be the greatest group costume ever if a bunch of folks dressed up like the knock-off monsters from the movie. Or maybe just as a little Japanese girl holding a frog. 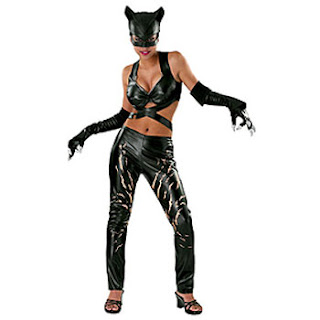 The Dark Knight Rises
I know this one isn’t exactly insightful, but I have a very specific vision of what we’re going to see. There’ll be the guys of varying degrees of body appropriateness sporting their store-bought Dark Knight costumes. I don’t begrudge that because, quite frankly, how else are you going to do that costume? I’m sure we’ll also see plenty of Banes. I’m particularly eager to see fat Banes. I think these will outnumber fat Hulks at least 3-1 this year.
No, what I am looking forward to are the woefully inaccurate Catwoman costumes that are sure to be happening. Never mind the ladies who won’t be mindful of my “Costuming to Body Type” rule – I’m talking about the ones who will be wearing black bodysuits with a Party City cat ears headband, some regular black high heels, and probably one of those tiny, bullshit whips.
I have a plan for these women. I’m going to tell them how hot they look and how great Catwoman is. Then I’m going to ask them if they can do the “Catwoman Crawl”. I’ll explain that Catwoman usually sneaks around on her hands and feet, very quickly, moving side-to-side and hissing. Then I will take a picture.

American Horror Story
This one might be a tough sell, as it premiered late last year and was over months ago. This year’s season is not only a completely different story, but also doesn’t start until October. But this was an incredibly memorable show with an amazing cast of stand-out characters, a few of which have a certain look that might appeal to costumers and one that majorly appeals to me. If you’ve been following Needless Things at all, you know
I’m talking about Moira the Ghost Maid.
Ladies – this is an easy one. You can find maid outfits and garter belts everywhere. Just add in a bucket of bloody water and a scrub brush and you’re golden. No wigs, though. If you’re not a redhead, dye it. But I expect at least 23 Moiras. Make it happen. And if a couple have to be old, one-eyed Moira; so be it.
And then there’s the Rubberman. This one is easy in a different kind of way, in that the dudes that sport this look probably already own the costume. Actually, the hard part is going to be determining who is in an American Horror Story costume and who is just wearing a rubber fetish suit.
Other AHS possibilities include the burned guy, the doctor and his wife with the freaky little baby. I’d love to see a group costume here, but I’m not sure all of the characters are distinctive enough for it. 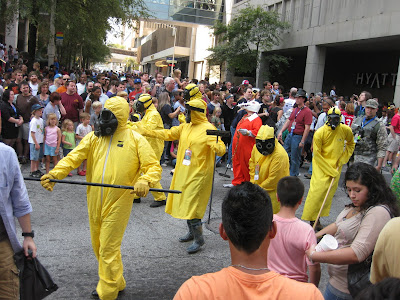 Bob & Carl: Sci-Fi Janitors
We saw a few costumes inspired by the Dragon*Con TV stars last year, but I have a feeling Bob & Carl are going to be represented in a huge way in 2012. Not only is there actually a Puppetry Track this year – largely thanks to the success of the Janitors; Bob & Carl’s followers – the Janiteers – are a growing and vocal bunch. I would expect not only standard human-sized versions of the two puppets, but also variations. Steampunk Bob & Carl are almost a given, but I’d expect maybe superhero, zombie, and probably even some Game of Thrones-style medieval gear. All of this just occurred to me in about thrity seconds, so I’m hoping the real cosplayers thought of all that months ago. If not, I’m ashamed of you guys. 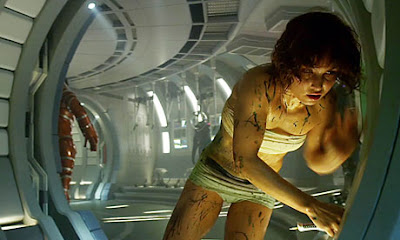 Prometheus
Prometheus not only offered new costumes and characters from Ridley Scott’s already-established Alien-verse (I already hate that and I just made it up), it also introduced us to a whole new race of aliens – the Engineers. Of course, Engineer costumes would be prohibitively difficult – they’re so damned tall! - and I can’t imagine how anybody would make that giant facehugger. No, I’m just thinking that some ladies with the right body types might want to recreate Noomi Rapace and Charlize Theron’s gauze Future Underwear. C’mon , girls – you can do it! It could be the new Leeloo! Especially with that sexy line of surgical staples across your abdomen. 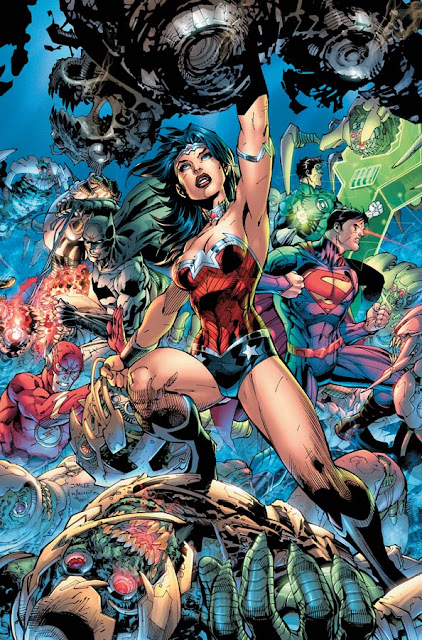 DC Comics’ New 52
I totally expected this last year and didn’t see a single costume from DC’s new continuity. But maybe that’s because nobody took it seriously as a permanent thing. I mean, who wants to get stuck with some seamy, overly armored, briefless Superman costume when he’s probably going to revert to the old look within a year? Just look at the third-party licensing – how many lampshades or sheet sets or wall stickers or t-shirts have you seen in the mass market that look like the New 52 versions? Everything is still the classic costumes. Even the new sixth-scale figures from Sideshow are based on the older costume designs. That’s showing a whole lot of faith in your reboot, DC.
Sorry. Didn’t meant o go off on a tangent.
Now that a year has passed and the New 52 is clearly the ongoing, fully supported paradigm (pfft) I think we might see some costumes. At the very least they are visually interesting and would provide a fresh challenge for talented cosplayers.
Or we might once again see Stephanie Browns outnumber Barbara Gordons twenty-to-one. 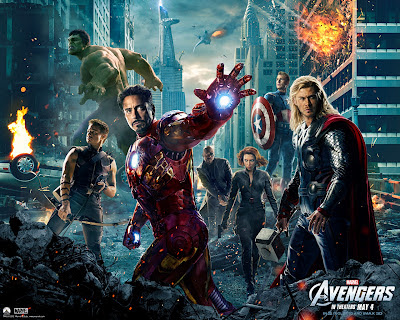 Avengers
This movie provided so many opportunities for every level of cosplayer. For the skilled you have all of the hero costumes, the Chitauri, and Loki. For the intermediate there’s various forms of SHIELD agents. For buffoons like me who can barely loop a scarf around their neck, let alone sew leather pants together, there’s Agent Coulson, Tony Stark in his Black Sabbath shirt, Natasha Romanov in her Little Black Dress, or the Shawarma guy. I can’t wait to see the Avenger cosplayers Assemble Saturday night at the Marriot.

Side Note: I don’t know if that’s really where or when that will happen. That’s just a good spot for themed costume assemblage. 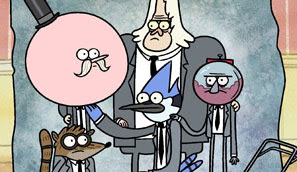 Regular Show
We’ve seen plenty of Adventure Time costumes over the past couple of years, and believe me – I’m excited to see more. But what I’d really be stoked to see this year would be Mordecai, Rigby, Benson, Pops, Muscle Man, and Skips. Oh, please let there be a Skips. Not to mention the hundreds of incredible tertiary characters this show has already given us like Death, Gary the Chauffeur, and Baby Duck Gestalt. 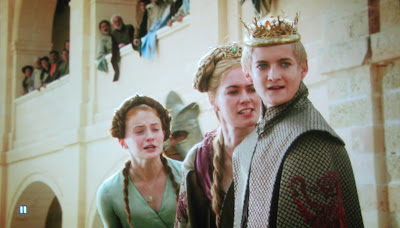