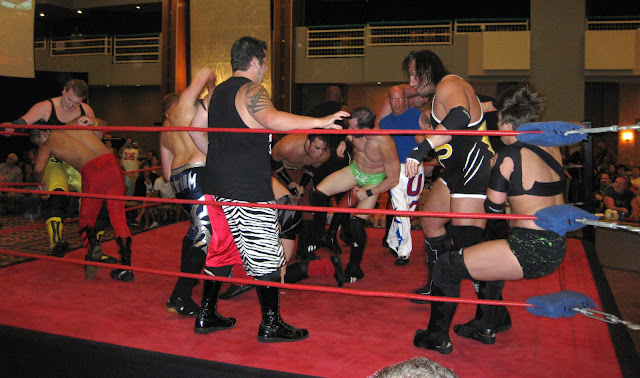 The time is rapidly approaching for a night of lunacy the likes of which can only be seen once annually. The universe quite literally could not contain more than a single yearly occurrence of such power, majesty, and sheer brutality.
I am speaking, of course, of DCW – Dragon*Con Championship Wrestling. The very best night of professional wrestling you will ever see in your life. Titans of the ring will go toe-to-toe with superhuman athletes that can seemingly fly from corner to corner of the ring. Massive Battle Royals and mano-e-mano contests will occur that will rock the foundations of the entire convention. There will be action, violence, and high drama. When all is said and done, the walls of the Hyatt Centennial Ballroom I-III will be slicked with blood and sweat. And a heaping helping of LUCKY FUCKING CHARMS.

That’s right, motherfuckers – it’s almost time for DCW! DCW! DCW! And you had better take off those panties and put on a fucking stainless steel jock strap because the badass sumbitches that get in the ring on Friday night at Dragon*Con ain’t there to have a fucking tea party, Sally.
Every single year at the very best fucking dork fest the planet Earth has to offer, the absolute toughest pro wrestlers the indy circuit has to offer get in the ring to beat the living fuck out of each other for the amusement of three ballrooms’ worth of jackoffs in Harry Potter glasses and Vulcan ears. These grapplers are not the best of the best. They are the worst of the worst – the meanest, grizzliest, shit-eating suplex jockeys you’ve ever seen in your life. The DCW locker room makes the Mos Eisley Cantina look like Breakfast at motherfucking Tiffany’s. These filthy animals would eat Batiatus’ ludus for breakfast and then shit out machine gun bullets. I don’t even know what that means, but
DC

W!!!!
Whew.
So anyway, I thought it would be pretty awesome to have a little Q&A session with some of the monsters that will be competing at this year’s event, as well as some that have had the misfortune to be there multiple years now. I say misfortune, but the simple fact that they survived DCW to be here today means they are lucky bastards, indeed.
You might notice this deviates from my normal “13 Questions” format. That’s because these guys would have shredded my regular thirteen and shoved them directly up my ass. No, I had to sit down and work up thirteen new questions especially suited for the grueling experience that is Dragon*Con Wrestling.
Let's kick this bitch off with a true DCW Legend -  “The No Pain Train” Iceberg!

Iceberg is a bona fide Dragon*Con Championship Wrestling Hall of Famer.
He’s a big, unstoppable mass of humanity – DCW’s answer to Juggernaut and Rhino all rolled into one.
This monster has worked for NWA Anarchy, IWA Deep South, TNA, CZW, ROH, and NWA Wildside. He was trained by Abdullah the Butcher and has held numerous titles over the years, including the NWA National Heavyweight Title and the NWA Anarchy Heavyweight Championship.
Also, he gave the most fucked up answer so far to “What was your favorite toy?”
Ladies and gentlemen, I give you The Being of Inconceivable Horror, the No Pain Train…
ICEBEEEEERRRRRRRG!

1) What was your very first match or experience in pro wrestling?

A) Very first match was some random guy in Marietta Ga. at the National Guard Armory. I beat him in less than 2 mins.
2) What was your favorite toy when you were a kid?

A) I had a machete with a 24" blade, that was my favorite thing to play with.

4) How did you become involved with DCW?

5) Can you tell me about your first DCW experience, or if you haven’t worked it yet what you’ve heard?

A) Myself along with John Arden and Billy Love worked against Abdullah the Butcher who would later become my mentor.

6) What is your DCW dream match?

A) Myself and New Jack vs. Murder One and Kory Chavis with Jeff G. Bailey managing either
team.7) What is your favorite piece of gear you’ve ever owned?

A) A pair of ring worn Abdullah the Butcher pants and boots that were given to me.

8) How does a DCW match differ from other matches? Or does it?

A) It differs because it isn't the conventional wrestling crowd, but they are totally involved. Also we basically have no boundaries as far as what we can or cannot do.

A) Bringing entertainment to its purest form. Life action drama and suspense captivates everyone around it. It's so easy to get lost in the moment.

11) What is your big nerd passion?

A) Horror in all forms.

A) Jaws. The fact that you didn't see very much of the star (Bruce the shark) made that film. You had to use your imagination.

Iceberg is a man of few words and much violence. He’s spent the last several years beating suckers to a pulp in the DCW ring. I cannot wait to see it happen again.