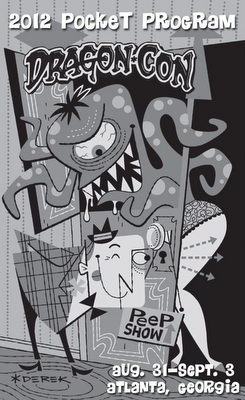 
Dragon*Con starts TONIGHT, motherscratchers!
Well, not really. Right now it’s still eight days away. It takes time to write these things, you know? But for my dear readers the big show starts tonight, and guess what?
I am going to be there.
For the first time ever I am going down on Thursday night. Everybody keeps telling me that Thursday is just so great, so this year I’m gonna find out. So Evil, Sally, and everybody else – I am holding you guys personally responsible if I don’t have the best time EVER.
There were actually a couple of practical reasons to stay Thursday night, the biggest of which is that I am on a panel Friday afternoon. The “Confessions of a B-Movie Addict” panel is at 1 PM in the Marriot Atrium, room A703. Now, you might be thinking, “Geez, Phantom – isn’t 1 PM late enough that you could get down there like you normally do and have plenty of time to make it?”

Well, sure. That sounds all reasonable and stuff, but I don’t have the best track record for actually getting up and making it downtown. Which is weird, because on days that I work I get up at 3:30 AM. But I just have this mental block. Add in the fact that I always pick up my supplies – beer, snacks, a trusty and disposable Styrofoam cooler – on the way down there and there’s just too much room for delays. I really don’t want to miss being on my very first Dragon*Con panel.
The funny thing is, I’m not even sure I should be on this panel.
Director Faber of the ESO Network dispatched a missive to all of his operatives stating that there were opportunities to be on certain panels if we wanted them. The guys running the American Sci-Fi Classics Track were looking for a few good nerds. I looked over the list - mindful not only of my interests but of things that would conflict with my drinking – and selected “Confessions of B-Movie Addicts” and “1982: Best Sci-Fi Movie Year Ever?”. These things line up with my interests and provide enough material for me to discuss.
Well, the 1982 one does, anyway. Anybody could do that panel. Just look up that year in movies on Wikipedia. It’s nuts. We’ve all seen those. The other one I’m not so sure about after reading the description:

B-movies are not a guilty pleasure.
They're just a pleasure. Revel in 1950s atomic horror,
Corman classics, and more!

See, I volunteered for that one on title alone, thinking of the great VHS boom of my youth. B Movies like Basket Case, Night of the Demons, Night of the Comet, and maybe even Night of the Lepus. Pretty much anything with “Night of” in the title. But I wasn’t thinking about the fact that the “B Movie” predated my birth by a couple of decades. I don’t know jack shit about 50’s stuff. I mean, I know a little, but not enough to talk about it. I know a little more about Roger Corman stuff, and the “and more!” gives me hope that I’ll be able to shoehorn my own ideas of B Movies into the discussion. A lot will probably depend on who else is on the panel. If it’s a bunch of old people I might be in trouble. But I’ll be there. Just like on February 14, 2007, I’m not pulling out.
The other panel is going to be rad because I’ll get to talk about how much I fucking hate ET. And Tron. Fuck a bunch of Tron. It’s on Saturday at 4 PM in the same room.
So anyway, I decided to stay Thursday night. I called the hotel a few weeks ago to find out how much it would be. It was a lot, so I didn’t book it. They said it was fine and that I could likely show up on Thursday and book a room for an extra night. Thursday was looking light. I thought about it and thought some more, made a couple more calls to the Hilton, and finally decided to just go ahead and do it a couple of weeks ago.
They told me they were booked and I would have to change rooms on Friday. And that checkout was at noon and check-in was at 3 PM. This sounded absolutely retarded, but I went ahead and booked, hoping I could stow my stuff in somebody’s room for a few hours. Evil, Monkey and company said that was fine. Evil also said the same thing happened to them last year and they ended up being able to just stay in the same room, so here’s hoping.
Anyway, that’s all the stuff I wanted to point out in my preamble. Look for me all weekend. Keep an eye on Calabrese’s table, as well. I’ll be stopping by there at one point to either thank them profusely for doing a Q&A or to harass them for not.
What follows is everything I am interested in, conflicts included. It’s gonna be a busy weekend.

Thursday
Me and the missus will be heading down in the evening to pick up our badges and check into our room. She’ll be going back home and returning Friday, while I’ll be staying. There are a couple of things going on Thursday night that I’m curious about.
Friday
Saturday
Sunday
Monday

Obviously I am only going to do a fraction of those things. I count twenty-two total conflicts, and that’s not even including panels that are scheduled close together temporally and distant geographically. If “Cooking With Captain Jack” is at the Hyatt and ends at 2:30 and “The Sexuality of the Ferengi” is at the Sheraton and starts at 3:00, you’re not gonna make it. But there’s plenty of stuff to do, tons of dealers, lots of guests, and hopefully enough booze. No matter what, I’m going to have fun.
Keep in mind, this is only a tiny representation of what’s going on at Dragon*Con. For the full picture, go download the schedule right now and start planning.
Anyway, I’ll be around all weekend. If you see me, let’s have a beer. Better yet, buy me a beer.