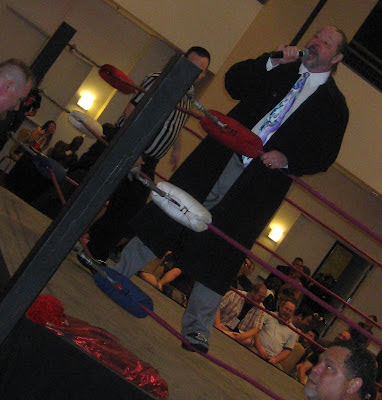 You may know Jeff G. Bailey as one of the loudest, most obnoxious, long-winded gas bags in all of professional wrestling. He is a man who can create a flow of words so eloquent and constant that you can’t even find a spot to yell, “SHUT THE FUCK UP!” like you want to. And I mean really want to. As a manager, Bailey has represented some of the most fiendish and dastardly wrestlers to ever enter the squared circle. He is absolutely devoid of guilt or remorse for any heinous actions he or his charges commit.

.
I know Jeff. G. Bailey as a fucking righteous guy who has helped me achieve one of my major goals as a Luchadork – devoting an entire week of Needless Things to hyping the fuck out of Dragon*Con Championship Wrestling. It doesn’t make Jeff G. any less of a dirtbag, but he’s definitely okay by me.


1) What was your very first match or experience in pro wrestling?
A) My first match was July of 1994 in Myrtle Beach S.C. I managed 'Hollywood' Tommy Landell vs Johnny Kidd. It was in a National Guard Armory in front of a 100 people & we were on first. My promo had been rattling around in my head forever it seemed, and I remember being very happy with how it all went. Hacksaw Jim Duggan told me it was good and then asked me if I had a "doobie". He later made the promoter cry when he didn't have all his money. I knew I had found my home, & it was truly the culmination of a life long dream.

3) What is one album everybody should own?
A) Does anyone ever answer this with one? I'll give you 10 and that's hard enough. These are not in any type of order...

2. Black Sabbath - We Sold Our Souls for Rock & Roll

6. Judas Priest - Unleashed in the East

7. Alice Cooper - Welcome to my Nightmare

Some of these are package or Live albums out of necessity. Everyone should own at least the first 6 Black Sabbath, KISS & Ramones albums. Tough Question. I like a lot of music & even adding all these barely scratches the surface, but since this isn't about music I'll stop with these.

4) How did you become involved with DCW?
A) I don't really remember. It was just another Wrestling show to me before that first time. I think through Blackout (Murder 1 & Kory Chavis) or possibly Iceberg. I had no idea what was in store & how much I'd look forward to it every year afterwards. I think for myself and a lot of the comic guys, it's the show we look most forward to every year.

5) Can you tell me about your first DCW experience?
A) I knew next to nothing other than a lot of people watched the Wrestling show. I had never been to any kind of 'Con so it was all a big WOW that first time. I was awed by the level of skill put into costumes. The first Spiderman movie had come out and I remember seeing a Green Goblin that was spot on to the movie costume. Granted that's a terrible Goblin, but it was an incredibly well done facsimile. My favorite thing is still seeing the costumes. I nearly lost my mind when I saw a dead on Mr. Mxyzptlk last year. I'm also a huge fan of 5$ graphic novels and always come home with a huge treasure trove of reading material.

6) What is your DCW dream match?
A) The crowd response & experience is so much more than any match that it's hard to say, but since they are both still alive, I'd like to manage Adam West against William Shatner.

7) What is your favorite piece of gear you’ve ever owned?
A) Probably my first pair of Gucci shoes, although my white ones are the most expensive & most obnoxious.

8) How does a DCW match differ from other matches? Or does it?
A) It's definitely different. I think it's best if you tailor the match for the audience. Anytime you can tie Comics, or Movie stuff in to your presentation, you’re more often than not going to get a response that plain old wrestling might not get. Not everyone watching is a wrestling fan, so involving the non fans goes a long way towards creating that thunderous response you’re always hoping for.

9) Which actor do you feel like you could sit and watch for hours no matter what they were doing and why?
A) There's a lot of choices for this like Clint Eastwood, Charles Bronson, or Al Pacino, but I'm going to have to go with Nick Cage. The reason is, I've sat through more shitty movies with Nick Cage than almost any other actor I can think of. Even if the movie is terrible, there is almost always at least one thing that Nick Cage does that slays me. He's not the best, and he's not my favorite but he always entertains me at least a little, even when surrounded by complete shit.

10) What inspires you to do what you do?
A) I grew up loving Pro Wrestling, I don't think that the modern product comes close to catching the magic, excitement or true visceral feel of past eras. I'm inspired to try and bring that out in people. Even though the inner workings of Pro Wrestling seem to be common knowledge (or so people think), when you can get people on their feet jumping and screaming and cussing like it's 1977 in the Omni that's what inspires me. Even if it's on a much smaller level, to be able to give people that moment where despite everything they know, you are able to make things real again for a short period of time, that is an amazing accomplishment and is why I still love doing it.

13) Closer – can you cut a promo for the DCW crowd?
A) Nothing is free in this world, want to hear a promo, buy a ticket.

Since that rotten, good-for-nothing Jeff G. Bailey won’t cut a promo for you fine people, I will: