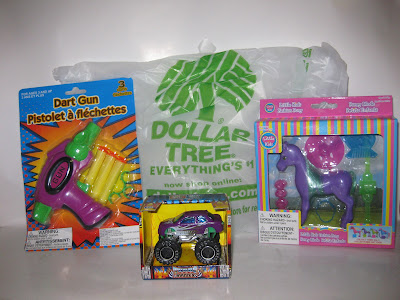 I hate to tread into X-Entertainment Dinosaur Dracula territory here, but I just couldn’t pass up these three items that seemed to be aimed specifically at me. Due to their nature, I also couldn’t pass up the opportunity to crank out an easy post.
We were at Dollar Tree the other day to buy some shower curtain rings. I probably shouldn’t tell you why I was buying shower curtain rings, but I’m going to anyway because the nature of this whole post is a bit ridiculous.

I needed shower curtain rings because I have too many t-shirts.

For whatever reason, I got motivated the other day and decided it was finally time to do another t-shirt purge. I say “purge”, but it’s not like any of the shirts I take out of my closet are going anywhere. They just get folded up and stuck on the shelf rather than hanging on the bar. I do this about once a year because I am dumb and keep buying t-shirts even though I already own like, five hundred.
I was particularly irritated when I did this the other day because I realized I only actually wear about ten percent of the shirts I own. Usually I just grab one I know fits well, but lately I’ve been wearing whichever one was closest to the front because they were all jammed in so tight it was difficult to browse through them. When I started pulling shirts out I saw that the ones that had been in there for a while had marks where the hangers had been shoved up against each other.
So I cleared out about eighty shirts that are too big or that I just don’t wear, folded them up, and jammed them up on that shelf. I decided I wanted a something that would make me choose my shirts differently so they would get more rotation. I needed a way to separate my shirts somehow so that if I wanted a movie shirt or a comic book shirt or a music shirt I could find them easily rather than the same five shirts just always being at the front.
This is where the shower curtain rings came in.
I needed something to separate the different categories of t-shirts and shower curtain rings seemed like the thing. I asked Mrs. Troublemaker if she had any and she said that Dollar Tree had them.
I don’t go to Dollar Tree a whole lot, and I have to admit it’s because I’m kind of a retail snob.
But we went and of course had to check out the toy section in hopes they would have some of those utterly crappy bootleg toys that are so much fun for about 12.5 seconds and then you throw out, wondering why the fuck you wasted a dollar on it.
This time around at least the crap was color coordinated to me.
The first thing I saw was the dart gun. It was purple and green and at least halfway reasonable. Who doesn’t like to have a dart gun? Next I saw the My Little Pony knockoff, which had extra value because not only was it purple and green but it was also a girl’s toy. Finally there’s the monster truck. A little basic, but I couldn’t pass up the trifecta.
I’m not going to do my standard review because these pieces of crap don’t deserve it. Well, maybe the pony does.
Turbo Wheels Monster Truck 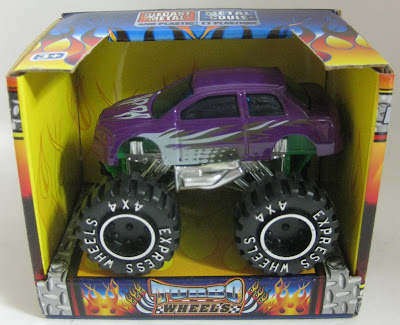 The box this thing is in is nice enough. It’s utterly crappy cardboard that would dissolve when the child that is given this toy cries on it. It rips open easily enough to reveal a single one of those awful wire ties securing the truck in place.
The truck is like any other toy truck you might buy except that it is completely hollow underneath. But the body is metal, the windows are translucent blue plastic, and the wheels are huge. The plastic parts are about the flimsiest plastic you could make something out of and expect it to hold a shape. The wheels are nice and shiny and the tires are a hard, brittle plastic. 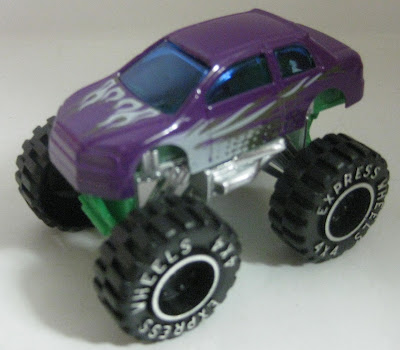 The paint job is actually quite nice and features more than two colors.
Once I got home, I realized I already had one of these. I spent the next several minutes doing a little quality testing – by which I mean tossing the monster truck around – and was surprised to discover that it’s actually pretty sturdy.
It seems like this might deserve a decent score, right? Yeah – until I tell you that Dollar Tree had a ton of actual Hot Wheels about eighteen inches away from these pieces of crap. I don’t care if the Monster Truck is a little bigger, no kid wants one of these more than an actual Hot Wheels. 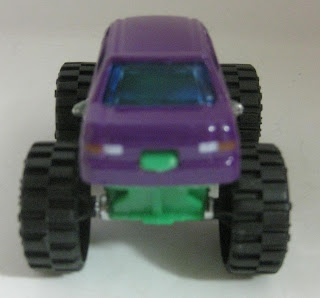 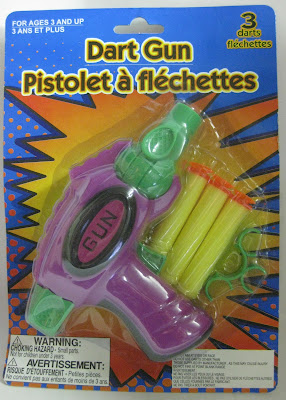 Dart Gun
AKA
Pistolet a flechettes 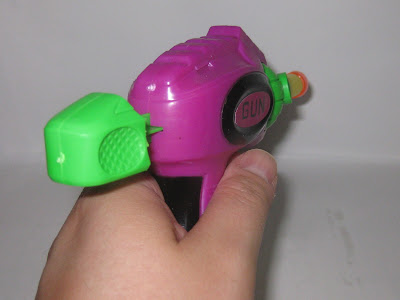 This thing is on the crappiest blister card I’ve ever seen in my life. The plastic of the blister is this weird kind of hardened saran wrap or something. It was sealed to the soft cardboard cardback so securely I wasn’t sure I was going to be able to get the gun out without damaging it. 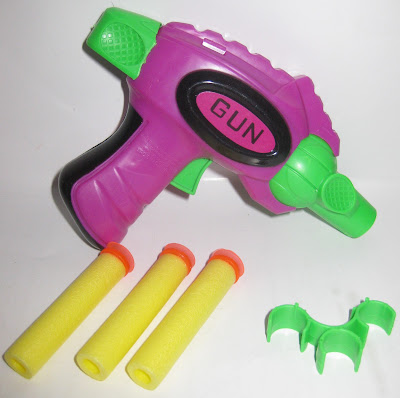 But I did and I have to say the gun – which is clearly labeled “GUN” so you don’t mistake it for a toaster or a chipmunk or something – is pretty neat.
The first thing I want to mention is the multi-directional barrel, which absolutely baffles me. The front portion of the gun is on a ball joint. I have no idea why. If it worked properly I suppose it would be great for people in casts who needed to aim but couldn’t turn their bodies or wrists. I dunno. But the thing is – the joint doesn’t really work right. First of all, when you move it you really feel like it’s just about to break. Also, it doesn’t stay put. So the feature is kind of useless because if you have the dexterity to hold the barrel in place while you fire, you can damn well point the gun anyway. 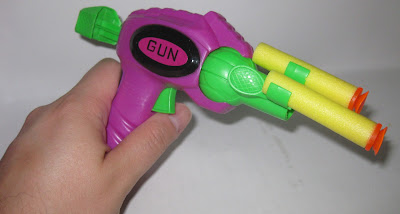 The plastic of the gun is that brittle Dollar Tree plastic and quite frankly that’s fine. If you’re buying a dart gun from Dollar Tree, you had better not be expecting it to survive any kind of real action.
The three darts are foam with what are actually pretty decent suction cups. The foam is super soft and will crumple with the slightest touch.
The dart gun also includes a little clip that sort of fits on the tip of the barrel. It can sort of hold all three included darts. It doesn’t look nice, but it does what it’s supposed to do, I guess.
As far as the actual functionality of the gun, it’s pretty good. You have to really jam the darts into the barrel, which is a little tough because they crumple so easily. Once it’s in there you pull the trigger and the dart shoots out with about as much force as you could expect from a one dollar pistol. The dart stuck to the background of my photo cube just long enough for me to take a picture: 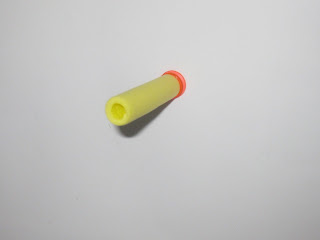 Which is more than I expected.
Totally worth a dollar, even though the barrel function is stupid and doesn’t work.
5 out of 5 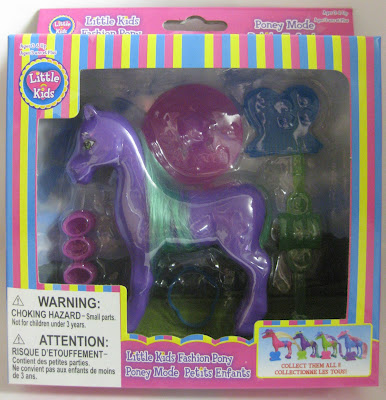 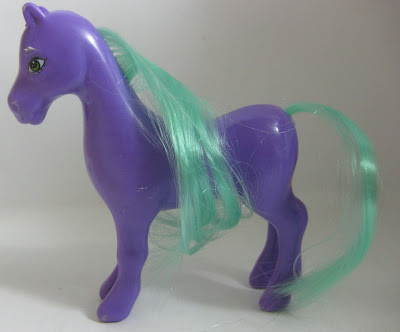 First Glance: Yes, I decided Pretty Pony Friend deserved a full-on review. Not a whole post, though. That would be absurd. But this is a fancy toy for Dollar Tree. This stupid piece of crap comes with more accessories than a whole wave of DC Universe Classics.
The manufacturer did not see fit to christen this eggplant equine with a proper name, so I am going to call her "Lavender Lick". 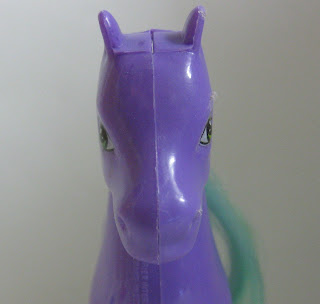 Sculpt: While Lavender Lick still looks fairly ridiculous, she does have a more realistic shape than a My Little Pony. Like, if you were going to try and teach your daughter about proper pony proportions you’d want to visit Dollar Tree.
Ms. Lick is molded from the standard brittle Dollar Tree plastic and features an unsightly seam right through the middle, ending in an ugly crack in her ass. The face isn’t really too bad. It doesn’t feature the same amount of character as the current crop of My Little Pony toys. Unless you count looking slightly inbred as character. This pony also lacks the swivel neck of the Hasbro Ponies – it’s all one piece.
Well, except for her hair, which falls out if you so much as sneeze at it. At least the hair is long enough to look like it could be combed. The texture of the hair is slightly unpleasant, almost as if it’s greasy, but it isn’t. As a matter of fact, I just had an urge to go and wash my hands just thinking about it. 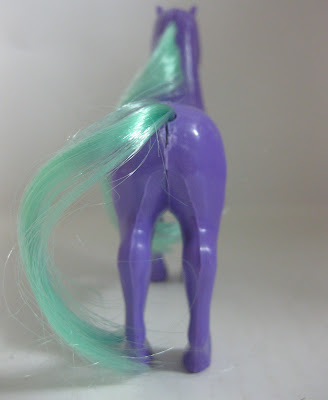 Design: Lavender Lick’s body is a fairly nice purple. The hair is a nasty sea green. I would definitely prefer the hair be a bit brighter. The only real deco is her eyes and they look fine. 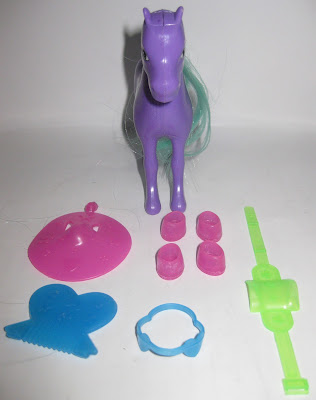 Accessories: This is whereLavender Lick really shines. She comes with four shoes, a saddle, a hat, sunglasses, and a comb. It’s all made of terribly cheap plastic, but it all fits where it is supposed to go and mostly stays there. Nothing fits quite right, but it all fits well enough. 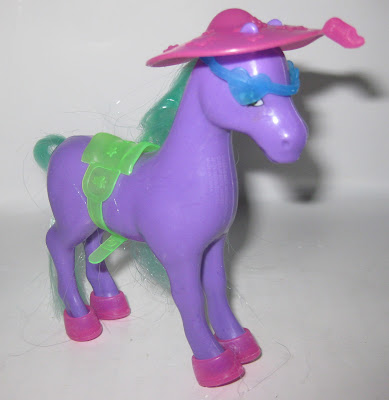 Packaging: It’s almost a window box, except there’s a blister inside. Like the dart gun, this was so hard to open I wasn’t sure all of the parts would survive. The graphics are nice enough, though. 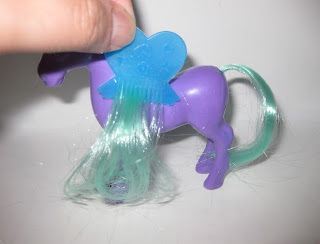 Overall: For one American dollar this is a damn fine toy. When I combed my new friend’s hair only about a third of it came out, so I’m going to consider that a win. 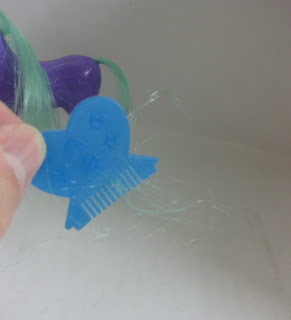