Oh, Bane, you cinematic enigma.
Are you from the Caribbean? Is your mask keeping you alive? Will you use Venom at all? What’s up with that jacket that makes you look like Tom Selleck from Quincy Down Under? Or do I mean Steven Segal from On Deadly Ground? Holy shit – a Michael Caine connection! Is there something in his contract where his costars have to wear sheepskin sometimes? Why the shit aren’t you wearing a luchador mask?

I like Bane and I always have. I know that sounds awfully convenient given the proximity of his big-screen debut, but “Knightfall” is one of my favorite story arcs of all time and one of the only crossovers that I had no problem buying every single tie-in of (at the time). Bane is more than a match for Batman. If not for a very convenient series of ridiculous events, he would have broken Bruce Wayne. I’ve reread “Knightfall” and “Vengeance of Bane” an awful lot, and that’s something I can’t say about most comics.
Admittedly, I didn’t pick Bane for my initial pool of ideas for Nolan’s third entry in his Batman series, but he was in the second round if I had ever gotten around to writing it.
I didn’t read any of Gail Simone’s Secret Six until last year, when I devoured the entire run in a few days. Now I like Bane even more.
The guy has been poorly represented in media so far. Possibly the best portrayal was on Batman: The Animated Series. But in The Batman, Batman & Robin, Batman: Brave & The Bold, and even the amazing Arkham video games he is portrayed as little more than a hired thug. His most positive media adaptation comes from Young Justice, where he is actually a brilliant crime lord.
And now Tom Hardy will step into the role (if not the mask) in The Dark Knight Rises, out July 20th. When he was first announced I didn’t know anything about Hardy other than he was on a lot of Hot Lists (or whatever). I was glad a relative unknown was cast in the role, but I didn’t even know what the guy looked like; let alone whether or not he had the chops to pull off one of the Dark Knight’s most complex – and perhaps difficult to adapt - villains.
Then I saw Bronson.
If you haven’t seen it, you should be ashamed of yourself. Okay, not really, but you need to check it out. It will give you a burning desire to see Hardy in The Dark Knight Rises. He pulls off a brutal, brilliant, lunatic very well. Not that Bane is a lunatic, but the character Hardy plays in Bronson is so layered and convoluted I have no doubt he will be able to pull off the role.
Okay, so back to toys – I found Bane and Batman at a Target the other night. I had gone there with the intention of looking for the new Movie Masters. Well, that and trying to find a little something for Lil’ Troublemaker. He was bummed because we had just had to leave a really fun time with a bunch of our friends. I was bummed, too, so we both needed toys.

First Glance: I wish he didn’t have the jacket, but I get why he has the jacket. It’s in the images we’ve seen the most of. Otherwise Bane is a big, bulky figure and I like him.

Sculpt: Bane is a 100% new sculpt.
I think his neck is basically ball-jointed, but it really only swivels. He has ball-jointed shoulders and the swivel/pivot hips that Mattel likes so much. There are pivots at the elbows, abdomen, knees, and ankles. His wrists, waist, and thighs have swivels. He does not have the standard swivels at his biceps.
The articulation issues are a little annoying. His head doesn’t have the expected range of movement, his arms can’t do as much due to the lack of bicep movement, and his low-hanging belt interferes with his hips.
As far as the actual sculpt, though, Bane looks good. The head is fantastic. What you can see of the Hardy likeness is great and the mask is full of detail, down to the straps having textures.
The torso is thick and detailed. Whatever kind of body armor that is has layers and straps and looks mostly good. I like the separate piece used for the lower part, even though it does limit the leg movement significantly. The only real problem I have with the torso is that the joint kind of looks like shit. The parts of the upper and lower abdomen do not match up regardless of how you have Bane posed. I really think they could have done better.
The jacket looks great. It has a lining and buttons inside and a lot of texture on the outside. The holes where the arms go through are fairly snug – you can only see a little of his torso through them. The arms themselves look fine, but the lack of swivel bugs me. They also can’t hang down by his body. The thickness of the jacket and the roundness of the arms keeps them sort of sticking out; like a kid in a snow suit. The hands are cool and have different wrappings on each side. They are sculpted nicely and while I would have appreciated two sets – open and closed – these do look fine. On second thought, they should have included a whole second set of arms so we could take that jacket off.
The legs look very good, with a lot of detail on the cargo pants to keep them from looking too plain. I like the pockets and indentions and whatnot. The knee joints are lined up so that they don’t break up the design. Bane’s boots are really cool. Like the pants and vest they have a lot of details to make them not look as dull as, well, boots.

Design: Bane does look a little dull paint-wise on initial inspection, but there is actually a lot of detail and variety.
The head features painted-on stubble and the eyes are accurate and well-placed. The mask has some light detail and manages to look a bit more vicious than the one we’ve seen from trailers and such.
The jacket, again, looks great. The interior is painted – lining and buttons – which makes a huge difference in the seeming quality of the figure. The vest also sports some nice layers so that it isn’t just an afterthought, with the upper and lower portions matching up nicely.
The pants aren’t quite as detailed, but they do still look good. The boots are great, with a couple of different shades and painted laces. I know painted laces should be a given, but they aren’t always.
Overall this guy has a very good paint job that could have been not-so-good.

Accessories: Bane comes with the support piece for the Bat Signal. It has some nice deco and looks appropriately worn. One side of the fork has a button that depresses and the other side has a sort of latch. You can tell how the signal portion will fit in and it’s a pretty neat setup. I like that Bane came with this piece because it allows for some neat posing.
Because Mattel sucks and likes to make us think it costs even more than it really does to make these figures, Bane comes with no real accessories. I really do feel he should have come with bare alternate arms.

Packaging: The packaging is very nice. The blister is in the shape of Batman’s forearm and is eye-catching and cool. The art looks good and is more mature than the other Batman product out there. This package would almost be too subdued if it weren’t for the shape of the blister. The back features the other figures from the first wave as well as a picture of the fully assembled Bat Signal.

There is also a sticker on the blister with a code to get Movie Cash for your ticket to see The Dark Knight Rises. I thought this was pretty awesome, so I pulled out the laptop and logged onto the site as soon as I could. Unfortunately the promotion doesn’t go into effect until 7/1/2012, so I’ve got to hang onto these stupid blisters until then. I know what you’re thinking – why don’t I just write the codes down? Because I’d lose them. I know I would. I guess I could make a note in my phone’s calendar, but that seems like so much work.

Overall: I think Bane looks really good and accurately reflects what we’ve seen so far from The Dark Knight Rises. However, he is kind of a crappy figure. Well, crappy might be too strong a word, but I am disappointed in the limitations on the articulation.
3 out of 5

Bane might not be quite as plentiful as Batman, but he shouldn’t be hard to find. Walmart is usually the cheapest for Mattel products, though Target has surprised me from time to time. Do your research before you buy this guy. I think I paid $16.79 for mine and while that was definitely too much, at least these are good figures with some kind of big accessory. More than I can say for the Jay Garrick I just paid $23.70 for. But we’ll get to him soon. 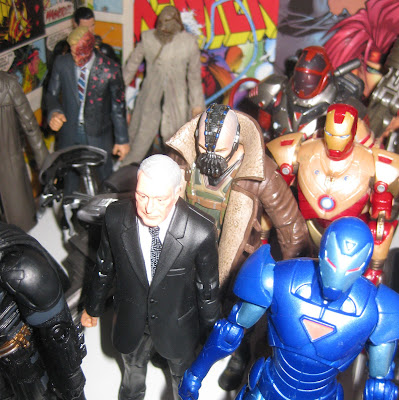