Saturday night a week ago there was an event at The Masquerade called the Labyrinth Masquerade Ball. The fact that a masquerade was taking place at The Masquerade was sheer coincidence.
The Labyrinth Masquerade Ball was not the sort of thing that would normally catch my attention. You’d think it would. I like the movie Labyrinth. I wear a mask. But for some reason this event was simply not on my radar until a couple of weeks ago when our new TimeGate friend Rebecca invited us to go.
We made our plans and got our masks and whatnot together. I wasn’t super-excited about the night at first, but I got myself geared up. I knew an event such as this one had the potential to provide me with a ton of material. Much like dinner at Little Szechuan, I looked at things through my blogger eyes and started feeling pretty positive about it. Excited, even.

The big night came and we headed downtown to what seems to be the go-to spot for events that we attend. When we pulled into the parking lot there were about twelve cars. I wasn’t sure how to feel about that since we arrived almost an hour after the start time. But whatever. We were there to party.

We might have been the only people there to party. I had been picturing something entirely different from what was going on inside the Masquerade.
In my head, the Labyrinth Ball would naturally take place in Hell – the downstairs portion that is traditionally the dance club. This is where the big Wednesday night Gothic/Industrial nights used to happen. It’s dark, there are several projection screens, a few raised dance platforms, and plenty of space. There’s a great light system and a big, raised DJ booth. Just to help, here’s the description of the event:

Mon Cherie & The Modified dolls collaborate to bring you the most fantastic event of the decade:
“The Labyrinth Masquerade Ball” in Heaven @ The Masquerade

So I pictured dancers up on the platforms, exotic performers suspended from the ceiling and moving about the floor, dealer tables on the raised walkway by the entrance, masked Goths of every shape and size on the dance floor gyrating to all your favorite depressing hits, and possibly some dude with a huge package and a 80’s rocker wig emceeing it all. I imagined dealers offering everything from masks to jewelry to fancy velvet jackets to S&M gear. I thought there would be nothing short of a Goth marketplace. Like I said, I got myself excited for it. If it was even just as good as one of the old Wednesdays this thing could be entertaining.
The Labyrinth Ball was upstairs in Heaven because some band that drew twenty people was playing in Hell. Half of the house lights were on. This was presumably so you could see the dealers’ wares, but it really took away from the atmosphere. There was a dance platform in the middle of the floor, only it was more of a “sitting and chatting” platform. Some company had set up a place to have photos taken. There was a fancy chair and some plastic axes and stuff you could pose with and around. The dealers’ tables lined the perimeter of the room. 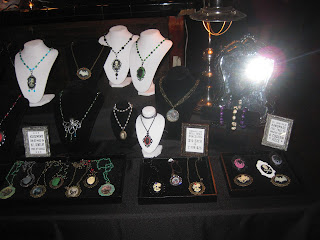 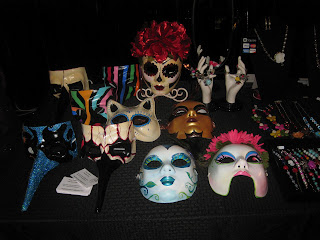 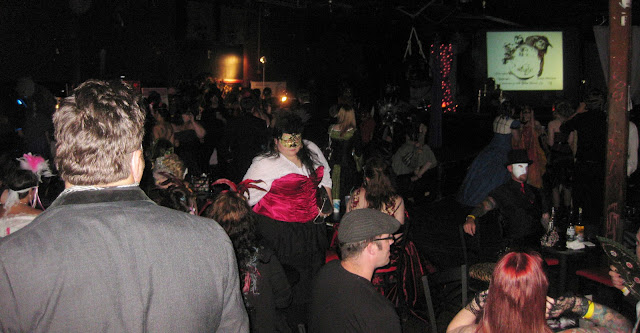 Speaking of which, there were people in need of masks. Despite the wording specifying that masks were mandatory, there were a good number of people who were not wearing them. Those people pissed me off. If you’re not into the theme of an event, don’t fucking go. You don’t look like you’re too cool to wear a costume or a mask, you just look like an asshole and you bring the whole room down by showing up in jeans, a t-shirt, your stupid fucking hipster glasses with the black frames, and a flat cap. A fucking flat cap, for fuck’s sake. At a Goth party. What an asshole.
I know that all might seem a little harsh, but I have certain views on costuming. 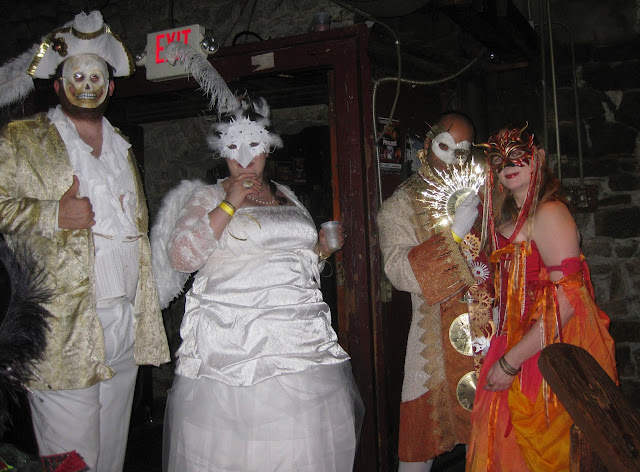 We used to have Halloween parties. Everybody had fun at our Halloween parties. Part of that was because they were costume parties. It was specified that costumes were part of the event. My feeling was what I said above – if you don’t want to wear a costume, don’t fucking show up. Clearly, you are not the sort of person we want at our costume party. But over time people started showing up not in costume. It got worse with each passing year so we stopped having Halloween parties. If we didn’t want people to be in costumes we’d throw a party in April, you know? 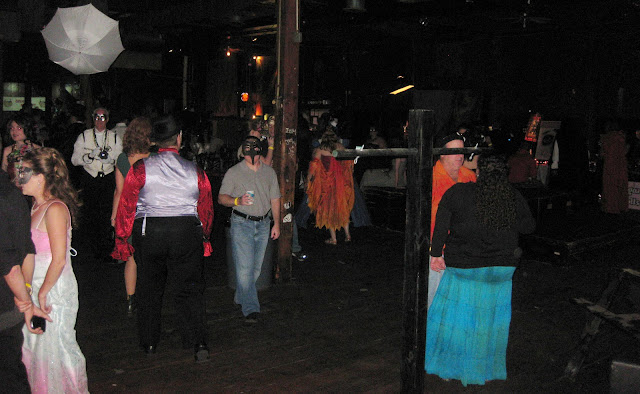 Okay, so there were a few people not in masks or costumes – or fancy clothes or whatever. I mean, I was wearing a suit and Mrs. Troublemaker was in an old bridesmaid dress; but we were dressed up. But then there were the people who were wearing masks with regular clothes. The little pervert guys. This one guy had on jean shorts and a polo shirt with one of those mosquito masks. There were a few like that – guys who seemed like they were probably only there to see half-naked Goth girls doing weird shit. I mean, we were all there for that, but at least most of us were trying to blend in.
As for the mosquito masks, like ninety percent of the dudes there were wearing those. This means to me that ten percent of us were comfortable with the size of our penises.
Everybody there was just sort of milling about. The music was mostly good. I can’t really judge the sort of music Gothic people listen to since I haven’t been around such folk in many years. DJ Jennocide did play “Megalomaniac” by KMFDM, which I appreciated. I’m not sure the crowd did, as they were still just sitting around. 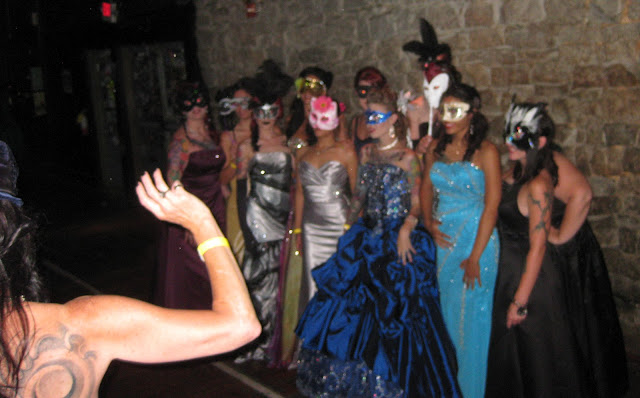 You guys know I'll always take credit for my shitty photography, but this one wasn't my fault. That chick stcuk her arm up in the air right as I took the picture.
We got beers and found Rebecca and also ran into TARDIS girl from TimeGate. I suck at having conversations in loud places. I get too annoyed that I can’t hear anybody and also that they can’t hear me. So if you ever see me in a club or anything just buy me a beer and we can stand there and stare at stuff. That’s what I did at the Goth Ball. Except for when this photographer started talking to me.
A few people complimented me on my mask, and at one point this guy with one of those flash reflector umbrella things attached to his back walked up to me and said he liked it. He did not take a picture, which threw me off. If you’re at this sort of thing and just taking pictures for whatever reason, wouldn’t you want a picture of the most unique mask there? I mean, after getting shots of 37 painted mosquito masks and about 50 sugar skulls wouldn’t you want something different? But he wasn’t there to get a picture. He was there to let me know he was a creep. He went on to ask me if I had seen Pixie yet. I said I didn’t know what that was and he got this glassy look in his eyes and told me she was one of the performers. Dude said she was so beautiful. She has a beautiful face and I’d know her when I saw her. I pointed out that everybody was wearing masks. He just sort of chuckled and said I’d know her. It was like something out of a movie, where the guy that is obviously the serial killer or whatever talks to the protagonist and the protagonist decides he had better track down the potential victim and warn her and things get all crazy and the protagonist gets drawn into some kind of wild world of murder and secrets.
I don’t need that shit in my life, so I just went and got another beer. 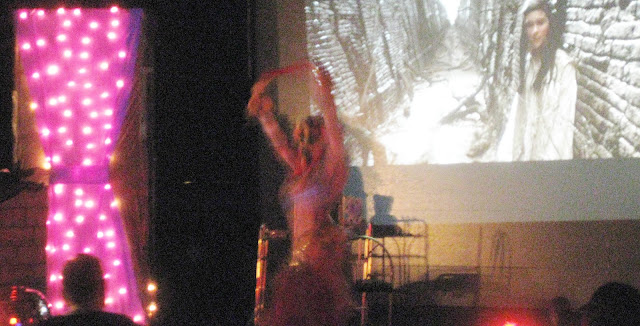 I did see Pixie later on because she was up on stage performing. This seemed like kind of a dumb thing to do for somebody who had a lunatic stalking them, but whatever.
I say “performing”. That’s probably being kind. She was just sort of moving around rhythmically. By which I mean dancing. I can only assume she toned down her regular act because nobody else there was dancing at all except for these people: 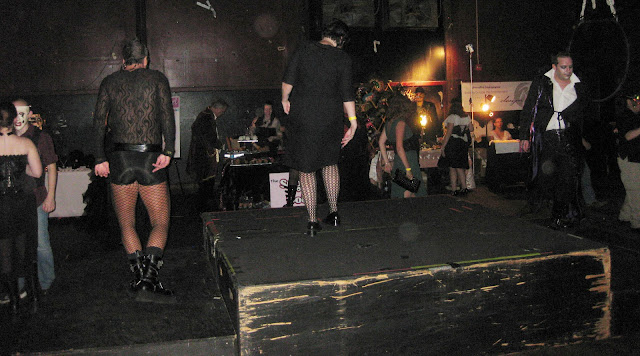 And she felt like she could probably get away with less effort. I was totally expecting some kind of dance of the seven veils or something, but when the music stopped she just left the stage. It was pretty anticlimactic. If Pixie had been in a regular club in the middle of the dance floor instead of up on a stage I wouldn’t even have given her a second glance.
Side Note: The girl in the middle up there was dancing from the time we arrived and still going when we left. She is my Goth hero. She was there to dance and fuck it if nobody else was. 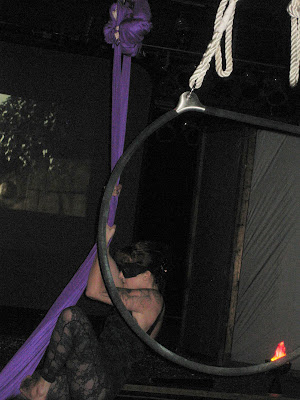 A few songs after the big stage show we did get another performer and this one was a bit more impressive. There was a giant scarf hanging from one of the ducts that I am always afraid the PCW wrestlers are going to hit their heads on. This girl in a leotard came out and started writhing around in it. I thought she might be having some kind of attack, but then everybody sat down and started watching her and I decided even if she was it was more entertaining than anything else going on. Eventually she spasmed her way about three feet off the floor and started flipping around and striking poses while wrapped up in the scarf – some Cirque du Solei kind of thing, only in a small, dirty club instead of a giant, dirty arena. 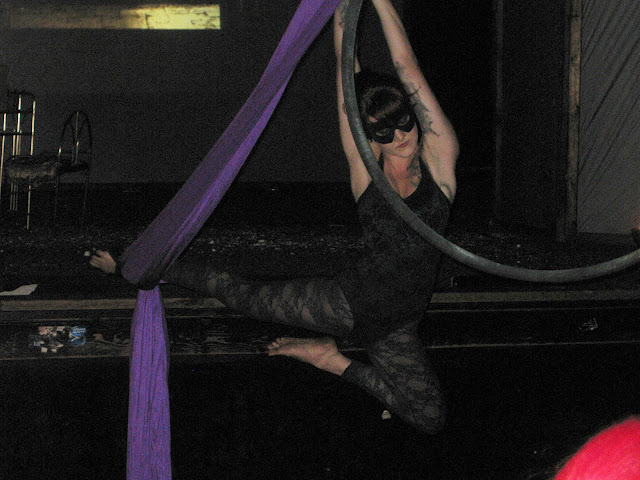 I’ll have to give scarf girl credit, as she was more along the lines of what
I was expecting than anything else there. Once her act wrapped up (HA!) we decided it was time to bail. The Masquerade in June is a little warm to be hanging around in suits and dresses and stuff, and if you’re not me wearing a mask in the heat is pretty uncomfortable. Rebecca and Mrs. Troublemaker were both having makeup issues.
After the most discrete change of clothes we could manage in a small sedan, Mrs. Troublemaker and I went to meet up with the Lady Monkey party. She was also celebrating a birthday that night. We met up at Midway, the same place Monkey and I had gone with Bear, the Queen of Crunk, and Dom Solo after the Screeching Weasel show.
Happy Birthday, Lady Monkey!

Email ThisBlogThis!Share to TwitterShare to FacebookShare to Pinterest
Labels: Goths, life the universe and everything