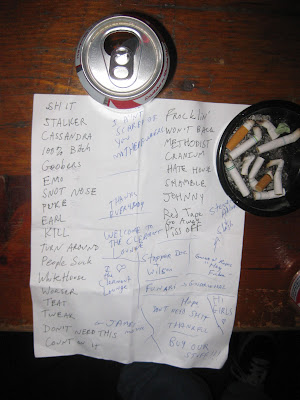 I do believe I might be ready to not go to The Clermont Lounge for a good, long time.
I’ve been feeling that way since Mrs. Troublemaker’s last birthday. Don’t get me wrong - we had an absolutely awesome time. Tons of our friends came out and DJ Quasi Mandisco was amazing. I do believe he is the best live DJ I’ve heard. Well, maybe not the best, but everything he played was to my tastes and my taste is impeccable. So yes – he is the best. It was a truly great night where everybody had a blast and I’ll be hard-pressed to top it for her big birthday next year.
But no matter how much fun it may be, The Clermont is a nasty, nasty place. You can’t touch anything, the floor is so sticky you can’t ever move your chair out of people’s way, the strippers are totally gross, and you go home smelling like you’ve spent an evening in the slave pits of Mordor. I’ve never had a bad time there, but I feel we’ve just been there a bit too much lately. Like, I’ve been waiting for somebody to say, “Wow. You guys are going to The Clermont again?” and I don’t want that. I don’t want to be the guy that’s at The Clermont all the time.

But we did have to return this one last time for a truly sad and momentous occasion that couldn’t have happened anywhere other than The Clermont Lounge – the fifth final show of The Tone Deaf Pig-Dogs; legendary Atlanta punk band and dear friends of yours truly. If you want to read a much better piece about The Pig-Dogs playing at The Clermont, go HERE. That’s the story of the first time I saw them after their resurgence a few years ago. Well, less a resurgence and more a mild swelling; but the point is the first time I saw them in over ten years was at this awful little strip joint and the final time (for a while, anyway) would be there as well.

The guys announced the show a couple of months ago and I made sure I would be available to go. I’ve been working a lot of days lately and have started to prefer them, but I stayed on nights for this one. I also made it clear I wanted to introduce them once again for their “final” show. More on that in a bit.
We got there early. I knew my streak of successful concert timing had to end sometime. I thought 10:00 would be a reasonable time to show up and I should have known better. I just really didn’t want to chance missing the Pig-Dogs, especially since Dom Solo had texted me to let me know we were on The Guest List.
This was a Big Deal for me. Seriously, you guys – it made me feel pretty good to know that somebody thought we were cool enough to put on the list. I don’t care if it’s The Pig-Dogs at The Clermont or Van Halen at the Georgia Dome. That’s awesome.
So we got there and I informed the door guy we were super-VIPs and he stamped us and told us to go right in. Being on The Guest List was everything I had thought it would be and more.
I certainly hope the trip to The Clermont was everything Rebecca thought it was going to be.
If you don’t remember, Rebecca is an Earth Station One contributor and a new friend of the Troublemakers after TimeGate. Naturally, the first thing Mrs. Troublemaker thought to invite our new friend to was a night of music at Southern Living’s winner for “Grodiest Place In the South” for forty-nine years running. What better way to impress people?
Once inside we saw the band hanging out in front of the stage with Wilson, who had emerged from the giant, hollowed-out tree he shares with his family in Cartertown or Cantonville or Castanuevela or wherever. Wilson only comes out twice a year to predict how long punk rock is going to last. If he sees his shadow, punk will be dead for six months and everybody will wear cheap little buttons saying so.
Also in attendance were Bear, the Queen of Crunk, Rescue John, and an assortment of punks from yesteryear. I finally met this Jinny person I keep seeing on Facebook and thought was familiar. She is, but I have no idea from where. My punker memory isn’t what it once was. Also familiar and thoroughly entertaining was the guy that was working the “sound board” for The Pig-Dogs. No idea who he was, but his combination of dancing and tuning the little buttons was outstanding. He’d make a great Boss-Tone.
After we grabbed a couple of beers and settled in, Rebecca showed up and managed to not only not vomit, but to sit down and hang out with Mrs. Troublemaker. I was starting to not feel so bad about this being our first non-con hangout time.
And then the first band came on and I felt really bad.
I am not going to say that Dyess was terrible. They simply did not play any kind of music that I am interested in hearing. I am not equipped to judge whether or not they were any good at what they are doing, because I wouldn’t listen to whatever that was.

There were plenty of people right up front, rocking out to the sounds of young men torturing their instruments. Good for them. There’s lots of music I like that others think is fucking terrible, awful, unlistenable crap. There’s plenty of music that tons of people like that I don’t. It takes all kinds. The kind of people that were sitting with me and Mrs. Troublemaker have a very low tolerance for Dyess, apparently.
When Bear showed up I told him they were like one minute of Helmet, but played over and over again. These guys had seven minute intros and outros that sounded like this and repeated – “chung-chung-chung-CHUNG”. They might have been screaming in German. I don’t know. To be fair, that could have just been the shitty sound in The Clermont. Either way, I’d rather stay home and pluck my taint hairs than go and see Dyess again.
So, much like my streak of arriving right on time to shows had ended; my streak of seeing great bands had ended. But at least it did so in such spectacularly bad fashion. A boring band would have been worse. Then I wouldn’t have had anything to write.
Mourdella was up next and me and the missus both like them. Usually. The problem Thursday night was that for some reason there was so much feedback on Jessica Juggs’ mic that it was a little hard to listen to. I didn’t see the point in recording something that wouldn’t be worth posting. Otherwise, though, Mourdella sounded as good as usual. I meant to buy a CD or maybe a shirt (because I totally need more t-shirts) but I forgot.
Rebecca did not make it through Mourdella’s set. I think the feedback was just too much. I totally understand. If not for the Pig-Dogs I wouldn’t have even made it through the first band and certainly wouldn’t speak to anybody that had invited me to that show ever again.
One plus for the night was that we were relatively unmolested by the strippers. It’s novel seeing a geriatric vagina flashed at you from under a Bo Peep costume for the first time. The second time it’s still sort of funny, but you can see where it might lose value somewhere down the road. The third time you pay to have it flashed at somebody else and that’s a hoot even if your victim doesn’t think so. But after that, it’s just kind of awful. I’ve had my fill of the various types of unpleasant naked bodies on display at The Clermont Lounge. Whether they are old or fat or both, I wish them the very best; but for now I have to say goodbye to the biscuits and gravy. And especially that moldy, grey, Georgia peach.
Mrs. Troublemaker, meanwhile, had been working very hard on consuming all of the alcohol in The Clermont Lounge. I did not realize this until later when I nearly had to carry her out to the parking lot. The reason I didn’t realize it is that I had gone up front after Mourdella finished to prepare for the big introduction.
I had planned on doing an actual vaguely sentimental introduction about how much I loved the Pig-Dogs and how they had influenced so many bands I knew. I was going to mention playing trombone for them at a show at The Masquerade (I did not then nor have I ever known how to play trombone). I was going to talk a bit about how important they had been to the Atlanta punk scene and how there wasn’t a nicer bunch of guys out there. I worked up a few different things in my head and had it all planned out so that it would hopefully go better than Evil and Lady Evil’s engagement toast.
But then I got up on the stage and decided all of that would be totally gaytarded and this happened:
It seemed more appropriate.
I’d like to tell you that The Tone Deaf Pig-Dogs were magnificent that night. I’d love to relate that the light from the Good Lord’s behind truly did shine down upon the stage at The Clermont Lounge, and that all wounds were healed and all sorrows were washed away.
It kind of was like that, really. 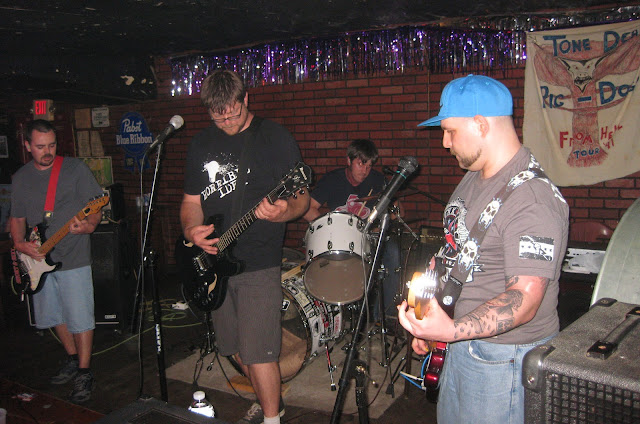 The Pig-Dogs didn’t suffer any of the technical woes that befell Mourdella except for this one time where Dom waved his mic in the wrong direction for too long. And the fact that Mike had some sort of problem with his guitar and just gave up on it halfway through the set. That’s okay. It felt right that this last set should have the frontman hanging onto that mic stand and rolling his eyes back in his head like the old days.
Speaking of which, back when I was in a band I totally ripped off Mike’s stage presence. Sort of consciously, too. I should be ashamed of myself. Maybe if I had aped somebody else like Iggy Pop or Glenn Danzig The Irresponsibles would still be around today. Just kidding.
So the set was great, the guys played about 873 songs, and I had an absolute blast and so did everybody else. At one point during the set, Dom asked who the fuck this masked man was standing up front and the sound guy turned around and gave me the rock fingers and yelled, “El Phantasmas!” and Dom said I was cool for taking his picture with Rowdy Roddy Piper, which I will agree with. Then for some wacky reason all these extremely drunk girls decided to have their pictures taken with me. I wish somebody knew who the heck they were because I’d like to see those. This one girl was barely standing.
The Pig-Dogs played their last song and that was that. The end of an era.
But I doubt it’s the last time we’ll hear from Mike, Dom, Keefe, and Smedley. The majesty of punk rock runs through their veins. And once you’ve experienced the sweet sensation of performing on that Clermont Lounge stage, the desire to do so again will burn deep inside of you for all time. Kind of like gonorrhea. 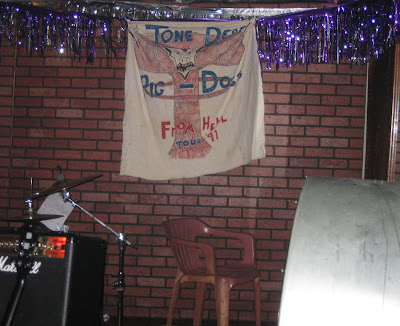