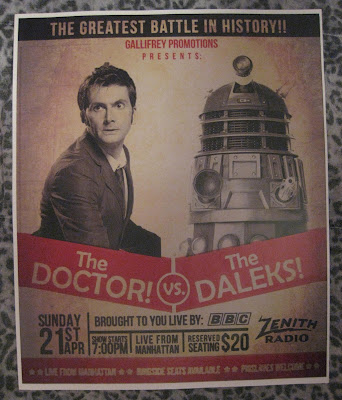 This one continues directly from Saturday night, so go read Part 1 and Part 2 if you haven't already. Also, as is usually the case I forgot something in the previous posts. Up top is the picture that's on the print and t-shirt I got from GeekCetera.

Mike F. and his son went home for the night, but the missus and I arranged to meet up with Mike G. and Rebecca back at the Holiday Inn Chambodia. I went upstairs and changed back into my Third Doctor costume because that’s really what I wanted to party in. We also had to fill up the beer bag, and with this came a complication – normally I just wear the bag slung across my chest, but that load-bearing strap would definitely ruin my fancy velvet jacket. While I pondered this dilemma Mrs. Troublemaker went ahead downstairs to meet up with Mike G. and our new buddy, Rebecca.


I finally decided to just throw aesthetics to the wind and wear the bag under my jacket. I know this is an important plot point for all of you. Especially considering I already knew once I got drunk enough I would just go back to them room and put my shorts and t-shirt back on.
But for the time being I made my way back to the lobby to find the party. Actually, the party was back up on the third floor where a bunch of people were sitting out in the hall. We’ll come back to that. Because I wanted to get to the big dance with Doctor Quincy E. Quartermain spinning. All I knew about Doc Q was that the Mikes knew him and he’s part of the Earth Station Who group on Facebook. It turns out he’s a pretty darn good DJ.
I found Mrs. Troublemaker with Rebecca and Mike G. in the lobby and we spent about 1.7 nanoseconds convincing Mike to stick around for a little while. He wasn’t going to drink, but he could hang. Doc Q was doing his thing in the Main Programming room (the one by our table) and was playing good stuff when we walked up. I can’t remember what, but it was solid enough that I immediately felt pretty good about the situation. This would not be a repeat of Days of the Dead.
But then we actually went in the room and saw about nine people performing Acts of Boogie of varying degrees of intensity. You had everything from a mild swaying motion to outright arm-swinging gyrations to a couple trying to swing dance. There was even a robot off to one side doing his own thing (not, oddly enough, The Robot). Looking into that room was like looking into a dimly lit recreation hour at an insane asylum. Like something out of Bronson or One Flew Over the Cuckoo’s Nest. We quickly retreated to a sofa back in the lobby.

We had a good time just hanging out there and talking with random people. Doc Q even came out from time to time to say hi. The middle of his set probably would have been crowd-pleasing if there were a crowd, but it wasn’t my thing. I thoroughly enjoyed the final act, though. He started live-mixing songs and it was pretty awesome. He mixed “Never Gonna Give You Up” with “Smells Like Teen Spirit” and “Take On Me” with some other rock song. He mixed a bunch of Doctor Who samples with other stuff. It was really cool. I would totally buy a CD of what that man did that night.
It was around my eighth or so beer that Mike G. discovered the reason for the lemons in the hotel water. He walked up to me with a cup of the water and says, “I know you won’t believe me, and I don’t recommend you try it, but this water tastes like bacon.”
This was a challenge I could not refuse. After surviving the film crew from The Douche Channel and the perils of Little Szechuan, what possible danger could a little bacon water present to one such as I - the Khal Drogo of the toy blogging community?
So I strode purposefully to the water jugs, procured a cup, and daintily lifted the little handle that makes the water come out. Because there’s really not a tough-looking way to get water out of those kinds of jugs. I guess I could have ripped the little nozzle out and poured it directly into my mouth, but then I would’ve gotten my suit all wet. Not to mention my phone and my camera.
“Holy shit. This water tastes like bacon.”
What else was there to say? It did.
Redhead TARDIS dress girl was nearby and asked if I just said the water tastes like bacon. I said it did and walked over to elaborate, but her interest went elsewhere immediately. I think she was afraid I was going to offer her bacon water. I altered course and headed back to our sofa of operations and let everybody smell the water, cautioning them not to drink it. I told Mike that must be why they put the lemon slices in the water – to cover up the bacon flavor. He reasoned that this must be the water they wash the bacon in.
I kept waiting for more con-goers to show up. I figured the room parties would slow down eventually and people would return to the lobby, but they never really did. I can only assume there were things going on in those rooms that wouldn't translate to a more public setting. I don't want to assume the TimeGaters were making sex and smoking the drugs, but there had to be a good reason nobody was downstairs. I definitely don't want to think they were all just sleeping. Besides, those folks on the third floor looked like shifty party monkeys.

Tony Stark Head and his long-haired friend showed up with a small entourage of people but that was about it. Once Mr. Stark whipped off his bath towel and started dancing on the stage I thought it might be about time to go back upstairs.
I’d like to give credit to Mr. Stark and his long-haired sidekick (if you’re reading this, sorry dude – you’re the sidekick. Your puns were great, but you’re going to have to step up your game to outshine Mr. Stark) for being fairly entertaining all weekend. They were those kind of noticeable figures that are always up to something but never overly annoying. I enjoyed their presence. I am also jealous that Mr. Stark had a better Third Doctor frilly shirt than me. It was a pain in the ass finding a frilly shirt that was the right color and fit me. Well, sort of fit me. The sleeves were about six inches too short, but that worked out for the best. I cut the frilly cuffs off and safety-pinned them to the inside of the jacket sleeves. This kept the cuffs in the right spot all night and left my arms a little more comfortable than they otherwise would have been.

Sunday
I have to say it was a pleasant change waking up two hours before check-out time rather than twenty minutes after. We took showers and packed our stuff. Had time to double-check the room. Actually left a couple of things in there, knowing we could return after we loaded the car up. It was nice.
Afterwards we reported to the table once again, then headed to the Con Suite for one last meal.
The Mikes had a podcasting panel from 1:00 to 2:00, then we had to get back to pick up Lil’ Troublemaker. I kind of got the feeling I could have been on that panel, but I just didn’t feel I had any business on it. I have done exactly eight podcasts in my life and don’t have exactly two pieces of insight into the process:
That’s it. And I certainly couldn’t have filled up my portion of an hour saying those things.
Rebecca, Mrs. Troublemaker and myself sat at the table and watched people mill about. We got occasional reports from the Dealer Room of further crazy specials from the guy with the prize wheel and a girl we met that works at CNN dropped by with a framed print of the Tenth Doctor on a dictionary page. Mrs. Troublemaker convinced me to not only buy some of those pages: 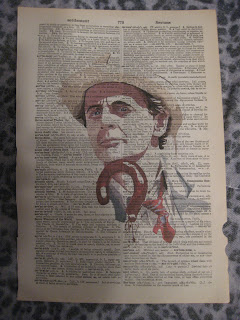 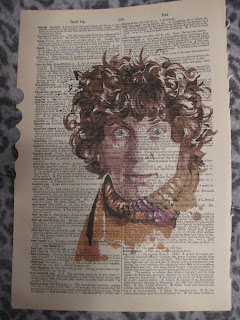 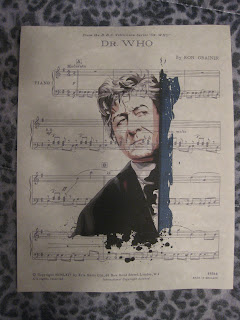 Now I wish I'd just gone ahead and bought dictionary pages of all the Doctors. I got Pertwee on the sheet music because that just seemed right, somehow. Mrs. Troublemaker also convinced me I should go and spin crazy prize wheel guy’s wheel for five bucks. I won this: 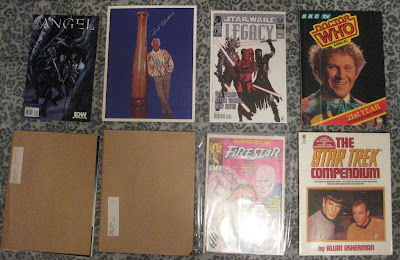 Pretty awesome, in my opinion. I plan on reviewing some of these items over the next few weeks, but my favorite out of them, all needs nothing more than a big ol’ 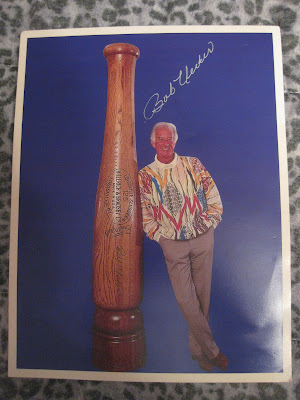 5 out of 5
Yes, folks – that is an autographed picture of Bob Eucker and it is easily the coolest thing I got all weekend.
A bit later a couple of girls came over and told us crazy wheel guy was now giving away GeekCetera art as well so I went again and got this: 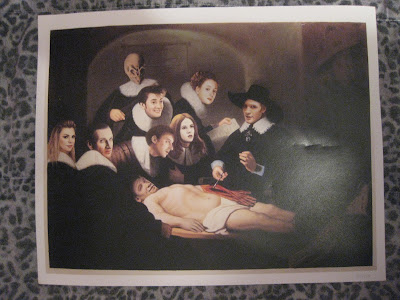 All in all I had a blast at TimeGate. It was low-key, but interesting. I didn’t do as much as I should’ve, but I think that’s just how I am the first time I go to a new con. I’ll definitely be back next year and will be convincing some of the Hooligans to attend as well.
-Phantom
Posted by Phantom Troublemaker at 2:29:00 PM

Email ThisBlogThis!Share to TwitterShare to FacebookShare to Pinterest
Labels: conventions, doctor who, life the universe and everything, TimeGate