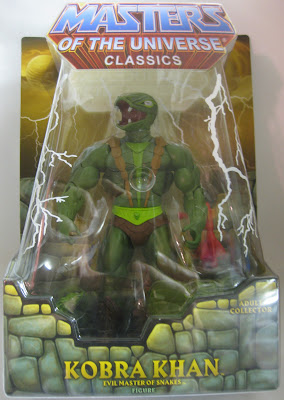 Despite the fact that I really dig Kobra Khan’s character, I wasn’t all that excited about getting this figure. I think he was one of those that the production pictures just didn’t do much for me. He didn’t look very exciting.

Of course, there was also the fact that the Chinese New Year – which is apparently an event only slightly less disruptive than an alien invasion – has delayed all of Mattycollector.com’s shipments for the foreseeable future.

According to the terms of the subscription service Matty offered these figures should be shipping two business days before they are offered for sale on the site. It’s touted as “one of the benefits our subscribers love!”. This has yet to happen in 2012 and Matty has blamed it on the Chinese New Year, something that has happened annually (no shit!) for hundreds of years and has never before caused such problems.


Kobra Khan has been the worst yet, as he did not ship until seven days after the sale and took eleven days to arrive. This is obviously fucking ridiculous. And once again some folks who ordered their figure on the day of the sale got theirs before I – a loyal subscriber who enjoys “the benefits” – got mine.

If these issues are still plaguing this inept company with its clear disdain for customers I am sure I will not be alone in failing to renew my subscription next year. As a matter of fact, this is the last month they have. If Thunder Punch He-Man does not ship in a timely manner next month I am done with subscribing. With their sale day inventory levels clearly under control and the last of the glitches on the website seemingly eliminated there is no reason whatsoever to subscribe. If the subscription exclusive figure is someone I absolutely have to have (which is doubtful) I’d rather pay the after-market markup than deal with Matty’s hostility towards subscribers.

As for Kobra Khan himself, I dig his story. He started off as just another of Skeletor’s goons, but ended up changing the face of Eternia. I’m not sure what his story was in the original line, but in the 2002 cartoon and in the MOTUC continuity he ends up releasing the Snake Men from their imprisonment and adding an entirely new faction of evil to the battle for Eternia.

I like the Snake Men because they are – like the Silurians from Doctor Who – based around the idea of Reptilian beings who live in the center of the planet and run things secretly. 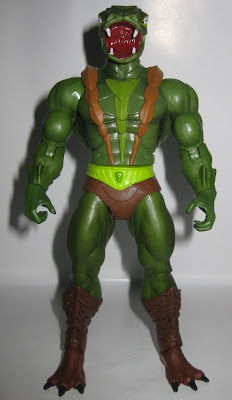 First Glance: I kind of wish they had done a closed-mouth head. But he looks good and seems to have a lot of new parts. 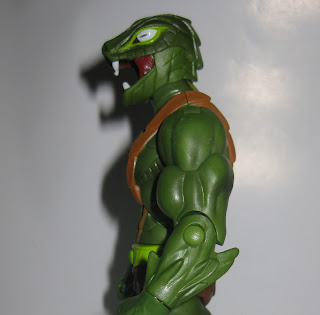 Sculpt: Khan has the standard MOTUC articulation. He has a new lower and upper abdomen as well as new calves, forearms, crotch piece, and of course a couple of new heads. I was fairly impressed that the abdomen was new parts. I had assumed Kobra Khan would have a chest piece like Clawful or King Hssss.

The new abdomen looks very good and functions well. The sculpted scales are quite creepy and line up well at the abdominal joint. The calves are also cool and work well with the “bad guy” feet. The new forearms look awesome, but cause the elbows to not have as great a range of motion as the other forearms in the line. I believe Khan’s elbows top out at about 45 degrees of motion. As good as the new parts look, this is pretty disappointing.
There is also a new, scaled crotch piece. It has a cool, angular belt that goes well with Kobra Khan’s aesthetics. The piece sits well and is snug on the figure, hiding the hip joints effectively.

While I prefer the hooded head, both heads look okay. They’re a little more toy-like than I would care for. I think the Horsemen could have maybe made them look a bit more realistic, but they are representative of the original Khan’s look. The scaling is very detailed and clean and the eyes are these creepy, little slits. I am not crazy about the mouth. As much as I like the big, crazy, open-mouth look on Leech I don’t like it as much on this guy. I think maybe if the regular head had a closed mouth and the hooded one was open I’d be happier. But that is personal preference. Quality-wise the sculpt is good. I’d like the fangs to be a little sharper, but I’m sure there’s some stupid, restrictive American toy law that prevents that. The hooded head looks a bit weird from the back. 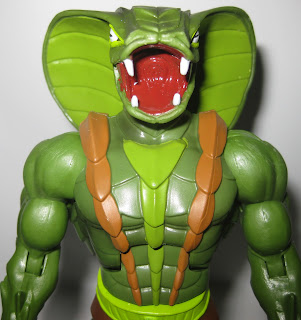 All of the joints on mine are tight and mobile. 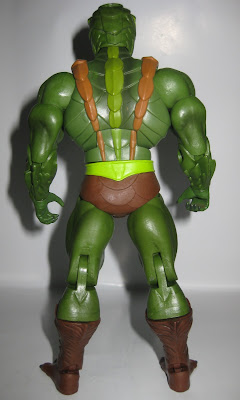 Design: The paint job is up to the usual MOTUC standards. Somewhat plain from far away, but once you get up close you can see the detailing involved. There is a darker toning on the skin and the head. The brown on the feet is solid, the toenails are a nice black, and the highlights look great. I very much like the yellow and lighter green on the chest and the head.

Speaking of the head, I do wish there was a bit of the light green on the back of the hooded one. It already looks a little strange just because of the way the sculpt is done, but it looks even more odd because the colors do not line up with what’s on the torso. 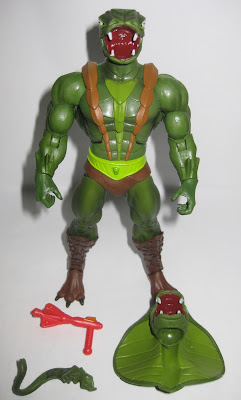 Accessories: Kobra Khan comes with a pistol, an extra head, and his pet – Fang.
The pistol is kind of weak. I know it’s exactly what the original came with, but it just doesn’t look all that good. Also, it fits rather loosely in Khan’s hand. It’s not bad or anything and at least he can hold it.

I don’t love either head, but they do look like they’re supposed to look. I just wish the Horsemen had maybe taken more liberties with them. This is a case where sticking too closely to the vintage look hurt the figure in my opinion.

Fang is awesome. He looks neat and has a lot of character. Also, I couldn’t remember his name (and found it odd he was not mentioned in the bio) and had to look him up, which led me to this:

Kobra Khan and his pet, Fang. by ~Axel-Gimenez on deviantART

I thought that was pretty rad. The guy has done a lot of cool Masters of the Universe art. My favorites are a series of Megator pieces. 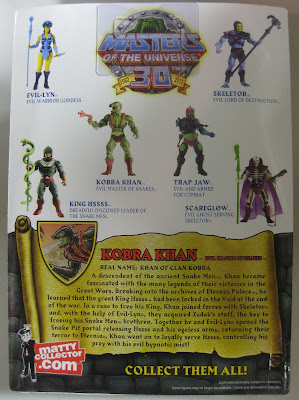 Packaging: Standard MOTUC packaging. I still really like the design and find it to be one of the only packaging styles that has not gotten stale. Something about the look of these toys in the package is just more exciting than other lines. 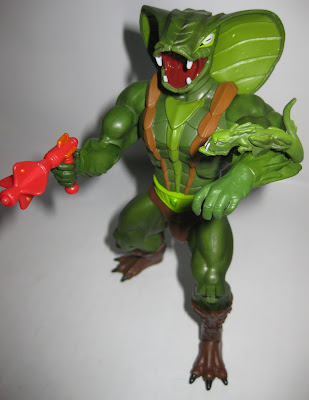 Overall: I don’t dislike Kobra Khan by any means, I just would have made some different choices with him.

I think once I have some more Snake Men I might like him a little more, but Kobra Khan certainly isn’t flawed. I may not agree with the design, but he’s a solid figure.

If you need one, you can head over to BigBad or brave the scalpers on eBay. My personal recommendation is to wait for the next local con. You’ll find the best deals on MOTUC there. 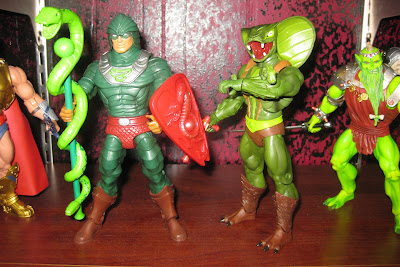