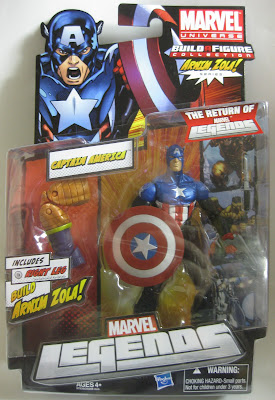 The very first time I saw pictures of the second series of new Marvel Legends I thought Fantomex would be the only figure I bought.

It’s not that the rest of the figures looked bad, they were just characters I either wasn’t familiar with or didn’t care to own. But then I saw that Arnim Zola was to be the build-a-figure for this wave and I knew I was probably going to be spending some money and likely utilizing some eBay afterward. I love Arnim Zola. Even more than MODOK.

After I got the first few figures from wave one I knew I’d be buying all of wave two. They’re just so good. I’ve had a blast collecting DC Universe figures over the past few years and I’m actually looking forward to the Infinite Earths figures, but Mattel’s superheroes just do not compare to Hasbro’s. Having brand new Marvel Legends in hand again was just too exciting.
Bucky Cap was the first figure I came across from the second wave. It was literally the only one left – just hanging there on a peg by itself. I grabbed it, thrilled to have found even one, and took it up to the register.

Once we got home me and Lil’ Troublemaker both wanted to open it up and check Cap out, but then I noticed there was a big gouge in his abdomen. Part of the red and white was chipped off and it looked pretty bad. So I left the figure in the package and hoped I would find a better sample.

A week or so later I was working all weekend – Friday, Saturday, and Sunday. My favorite Target is located between work and the house and I’ll usually stop there on one of my work days. I did so on Friday and they didn’t have anything I needed; just the Phantom Menace figures, a single Extremis Iron Man, and no new GI Joes. On Saturday I actually needed something, so I stopped and checked again – who goes to a store without checking the toy section? – and they had the exact same stock that had been there the day before.

I almost didn’t even bother stopping on Sunday. Why would I? Nobody gets anything on a Sunday. But my toy sense was tingling. Seriously – sometimes I just have this irresistible urge to stop places and look for toys. I mean, I always have a certain amount of desire to run in stores and check the toy aisle, but every once in a while I get a very strong and distinctive feeling that I need to stop. That particular feeling has never been wrong.

So I stopped and ran in Target and things looked about the same – nothing on the Marvel Legends pegs. As a matter of fact, that Extremis Iron Man was still laying on the shelf. I grabbed it to put it back on the pegs and that’s when I realized there was a Daken figure laying on top of a box near the Iron Man. Holy shit! Nice. It was even the unmasked one – the one I wanted. I grabbed it and glanced over the aisle again, thinking it was odd that it was the only one there. Then it occurred to me to check and make sure the build-a-figure piece was still inside. It was. Unfortunately this is a vital new step in the toy purchasing process.

Then I looked up at the pegs of Avengers toys and realized that the ones above where that Daken had been were full of Marvel Legends. The entire second series, probably three sets. I grabbed one of each and inspected them to make sure they had all their pieces and I was getting the best examples of each character. There were only minor paint variations among any of them and none were outright bad. I was stoked.

As far as Captain Bucky goes, he was a cool-looking figure that I have no real attachment to. His recent run as Cap is on my list of things to read, but I haven’t gotten around to it yet. 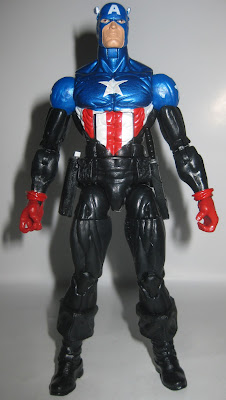 First Glance: I think the first one I bought was a rarity, as I just haven’t observed a lot of paint errors in this line. But still, be careful.

Otherwise this is a pretty neat looking figure, what with the utility belt and the metallic paint. I’ve noticed a tendency towards putting accessories in the wrong hands when these figures are packed. Bucky Cap has his shield in his right hand and his pistol in his left. It is an utterly meaningless error, but I thought it was interesting and worth mentioning. 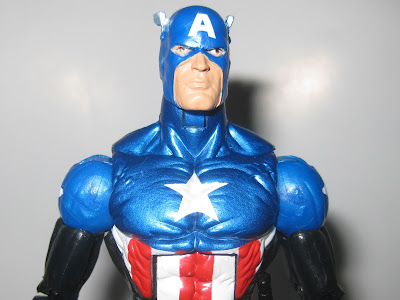 Sculpt: This Cap has what I suppose you could call a “Heroic Male” sculpt. It features the same basic look and form as the sculpts used for Klaw, Constrictor, and others; but is bulkier.

Captain Barnes has ball joints at the neck, shoulders, and hips. His knees and elbows are double-jointed. There are swivels at Cap’s biceps, boot tops, thighs, and wrists. His wrists also pivot. Man, I am getting tired of trying to describe all of the wacky articulation of the Legends. It’s awesome, but unlike DCUC stuff it’s somewhat different with every figure. I think I’m going to start just pointing out stand-out things, such as points that are new types or maybe that are unnecessary. I dunno. Bear with me as I work on this over the course of the remaining Wave 2 figures.

The actual sculpting on Captain Bucky is solid. Everything is clean and my only complaint is that his uniform is painted on rather than sculpted. I would have really liked the stars and stripes and other lines to have been sculpts. But I understand that figures are getting more expensive to make and honestly this figure still looks really good.

The head is distinctive from a Steve Rogers head, with a slightly different shape and I would say a sterner, more subdued countenance.

The costume is different by virtue of being all smooth lines rather than having any of the scales or seams of a Rogers Cap, which makes me wonder if the lack of sculpting is actually a reflection of the comics. Is Bucky’s Cap suit more streamlined than Rogers’? Is that a thing?

I like the ankles on this figure a lot. The foot moves side-to-side and is attached to the ankle on a pivoting joint. It looks much better than a ball joint or Mattel’s rocker ankle. Also, Cap’s boots have a very different texture from his uniform to help differentiate the black.

The figure also sports a belt with tons of detail. There’s a holster for the pistol and a sheath for the knife. Both items fit perfectly. As Evil pointed out (he got these guys long before I did), it’s nice to have a place to store all of the figure’s accessories. 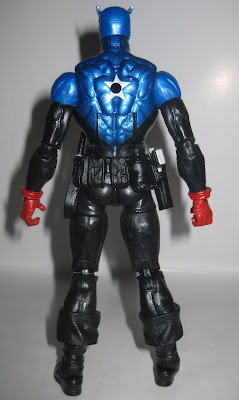 Design: The design of Bucky’s Cap suit is simple enough. The black foundation is a great contrast with the red, white, and blue. The metallic blue is a very nice touch and keeps this figure from looking like some kind of Dollar Tree knockoff. Not quality-wise, as this does look like a well-made, corporate-produced toy. It’s just that the black is almost a bit overwhelming; close to being bland.

The actual paint application is very sound. There is no blotching over overlapping and the detailing is tight. The “A” on his forehead (that doesn’t stand for “France”) is clean, as are Cap’s eyes and the star on his chest. The red and white stripes are also very solid and show no sign of the black beneath.

My only issue here is that Hasbro has once again pulled their joint trick, only this time with the wrists. The rings attaching Cap’s hands to his forearms is black, which does not match the red of the gloves that surround them. It’s unsightly and a problem that I still categorize as unacceptable. 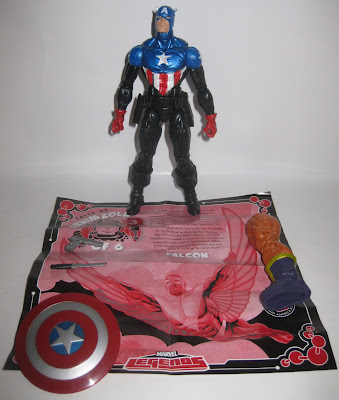 Accessories: Bucky comes with a shield, a pistol, a knife, Arnim Zola’s right leg, and 1/6th of the Adventures of Arnim Zola (or whatever they call the little story page).

The pistol and knife are perfectly good. The pistol looks good and has a slight metallic hue. Bucky can hold it firmly and well. In an age where many military-style knives sport blacked-out blades I’m glad Hasbro is still painting some of theirs silver. The only problem with this knife is that Bucky cannot hold it well. You can balance it in either of his hands if you like. But don’t look at him too hard.

The shield looks very good on the front and back, but I’m torn about the way it fits onto Bucky’s back. The wrist connection is good and solid, and the connector folds down to reveal a peg that plugs into a hole on the figure’s back. The mechanism works very well and the shield sits correctly; I just think I prefer the original Marvel Legends Cap with the elastic bands that went over his shoulders. I’m not crazy about a 6” scale figure having a peg hole in its back. It doesn’t look good, but it does work well.

We’ll get to Zola’s parts in my review of that figure. 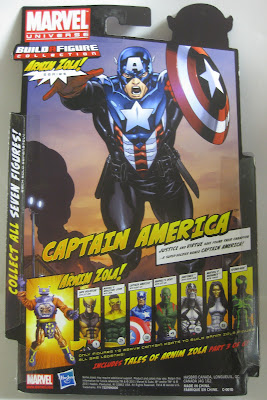 Packaging: The good ol’ taped blister card. It’s fine and I do believe the art for the second wave is a bit nicer. Still no bios, though. Even a stat sheet would be welcome. 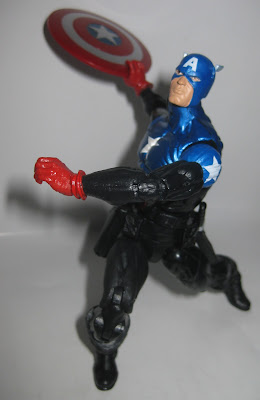 Overall: I do like this figure a lot, but if he hadn’t come with a piece of Arnim Zola I wouldn’t have bought him. He looks good on the shelf but I have no personal attachment to this version of Cap. 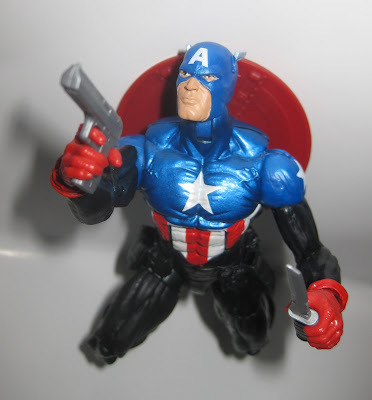 Hold out and buy this guy when you see him at Target. From what I’ve seen the prices for the Marvel Legends run like this:

Toys R Us, you have got to be fucking kidding me.

If you’re not looking to build Arnim and don’t care about this Cap, this is hardly a must-have figure. He’s very good, but nothing that breaks any new ground.

Lil’ Troublemaker’s Bucky Cap is better than mine. He came with a motorcycle.