Phantom Who: The Tenth Planet

Welcome to Phantom Who, a new feature designed to go along with the Earth Station Who podcast, which I co-host. Every other week there will be a new podcast discussing all things Doctor Who, with a central discussion about a particular story.

For the first year we are covering regeneration stories. Starting with An Unearthly Child and wrapping up the current regenerations with The Eleventh Hour, we’ll be covering the first and last stories of each of the first eleven Doctors.

Last time on Phantom Who…

I didn’t do a write-up on An Unearthly Child for two reasons. First, I hadn’t thought of doing it yet; and second I found a lot of the story super boring. But just so you’re not in the dark, here’s a brief recap:

The Doctor and his granddaughter, Susan, kidnap a couple of human teachers from Earth in 1963. Ian is a tough and capable guy and Barbara is pretty much just a screaming ninny.
Traveling in the TARDIS (Time And Relative Dimensions In Space – named by Susan), the quartet materialize on Earth in the Stone Age, where a tribe of extremely theatrical cave people are having internal conflict. The Doctor yells at everybody and Susan jumps on a caveman and screams. Things culminate in a violent brawl between two cavemen and Ian teaches everybody how to make fire. Afterwards they travel to a planet full of Daleks, who are nothing but trouble. We’ll get to that story at a later date. Now it’s time for the first Doctor’s final story.

The best available format for this story was an audio version through an online company called Audible.com. 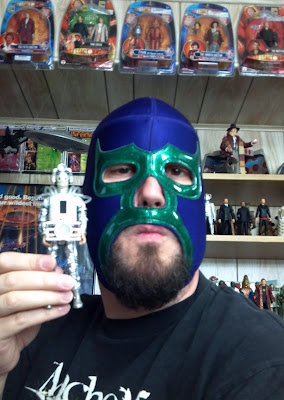 This story takes place in the far-flung future of
1986!
The Doctor, Ben and Polly land at the South Pole and are immediately escorted into an international research station. You know it is international because British people are doing bad American accents. One of the Americans is in charge and – surprise of surprises! – he is a war hawk who pretty much wants to blow up everything he sees. I’m sure this isn’t the first instance of Doctor Who’s long-standing anti-military leanings, but it is the earliest I’ve yet seen it.

Anyway, the personnel at the base are currently coordinating a space mission with a manned probe in orbit. The probe has just discovered… a tenth planet It is the planet Mondas and it is home to a race of cybernetic conquerors – the Cybermen. Of course, the folks at the South Pole don’t know this yet, but the Doctor – beong the Doctor – has his suspicions.

Which are confirmed when the Cybermen land near the research station, kill some guards, put on their parkas, sneak into the station, and take over. I really want to see the parts of this story that do exist because the image of Cybermen sneaking around in disguises makes me laugh so hard I need to pee.

The Cybermen bust into the control room and take over. The research team is all like, “Hey! You can’t take over right now! We’ve got to get our guys in the probe back safely!” and the Cybermen are all, “WE HAVE NO EMOTIONS. WE ARE CYBERMEN. SCREW YOUR STUPID FRIENDS.” In theses hilarious autotuned voices.

Side Note: I find the Cybermen to be the scariest of the Doctor’s nemeses and always have. They totally creep me out. Having said that, if I had experienced this debut before everything else I think I would just find them silly. So far there’s nothing about them isn’t hilarious.

So we learn that the Cybermen have no emotions and are, indeed, cyborgs that have eliminated impractical things like emotions from their brains. Finally, a bargain is struck that allows the researchers to contact the probe, but it is too late. It gets dragged into Mondas’ energy field and explodes. The Cybermen tell the international humans that Mondas has appeared to suck all of the energy from Earth into itself so that it can survive.

This is totally rad, as it means that the Cybermen’s planet of origin is a gigantic space vampire. Or, basically, Unicron.

It is never really explained just how Mondas is equipped to pull this off, but I don’t care because giant space vampire. And also because years of Doctor Who fandom have taught me to just accept certain things and get on with the story.

While all of this is going on, the Doctor is busily scheming in the background; waiting for the Cybermen’s attention to be diverted so he can take a nap.

Ben and Polly are proactively arguing against the Cybermen’s plan. I like the both of them. This is the first story I’ve experienced them in and I liked them almost immediately. Ben is very much a regular guy and Polly is the earliest example of the spunky female companion I’ve seen.

The Cybermen tell the humans and the Doctor that they’re not just going to leave them on Earth to die, they’re going to take them back to Mondas and turn them into Cybermen. The humans express their disdain for this idea, so the Cybermen lock Ben into a room with a projector, which Ben promptly uses to blind one of the Cybermen and take his Cyberweapon and shoots him in the Cyberface.

Ben does not fuck around.

If you don’t know, back in the 60’s everybody thought Geneva was going to be the capitol of Earth by 1986.

Geneva tells the General that they have already shot his son out into space to help with the probe. General War Hawk is not happy about this. I’m just impressed with his family. A general and an astronaut? Not too shabby.

General War Hawk decides he is done with this Cyberbullshit. He orders the crew to ready the dreaded Z-Bomb for deployment to Mondas. They’re going to blow that planet out of the galaxy before it can suck Earth dry. Ben argues that it looks like Mondas is going to burn itself out given time and that the dreaded Z-Bomb is far too dangerous to use. One of the researchers even suggests that the resulting radiation could burn out half of Earth. But General War Hawk wants to take action before it’s too late for his son and will not be dissuaded. He has Ben removed from the room and placed in a cell with the Doctor, who finally saw his opportunity, leapt into action and took a nap.

I thought at this point the Doctor woke up and told Ben how to disable the Z-Bomb, but it turned out one of the researchers was talking to him. The Doctor was still napping. Sometimes it’s hard to tell who’s talking in these audio versions, which is why I eventually was thankful for the ridiculous American accents.

So the researcher tells Ben how to render the Z-Bomb non-functional and Ben escapes from the cell to do it. But General War Hawk busts him in the middle of his sabotage and orders the launch! Did Ben get the job done in time? Will Mondas be destroyed? Is Earth doomed? Will the Doctor wake up in time to watch Matlock?

Yes to the first, no to the rest. The Z-Bomb won’t launch and General War Hawk absolutely loses his shit. He decides he’s going to kill everybody, even the Doctor, who was just napping the whole time and didn’t do anything.

But then, in a bizarre twist of events, the Cybermen bust in the room and Cyberblast General War Hawk to pieces, saving the day! Except that they still want to turn the remaining humans into Cybermen, and that really kind of kills the moment.

The Doctor – awakened from his nap by the General’s murder – says the Cybermen should just move to Earth and they can all live in peace and harmony together. This sounds completely ridiculous, but it turns out that the canny and now well-rested Doctor has a plan and is just stalling for time. The Cybermen agree to this, but only if the Z-Bomb warhead is removed from the launching mechanism and stored underground. They also want to take Polly back to their Cyberbase as a hostage, because in the 60’s that’s what women were for. It’s understandable though. You wouldn’t want to take the Doctor, as he’s going to want to nap and they’d have to carry him all over. You wouldn’t want Ben either because he’s just going to escape and run around your base dismantling things. Ben would be a real pain in the Cyberass.

The Doctor figures out that the Cybermen’s plan is to have the humans take the Z-Bomb underground and blow up the Earth, which will save Mondas. And no, I don’t know how.
Hush. Ben realizes that they need the humans to do it because the Cybermen must be vulnerable to radiation. This is kind of a weird thing to come across as a race’s weakness, because I’m pretty sure we’re all vulnerable to radiation. But whatever, Ben tricks one of the Cybermen into coming into the radiation room (or something) and it does, indeed, collapse. The group then fashions weapons out of reactor rods (again, I’m pretty sure humans don’t handle radiation all that well either; maybe I’m missing something from this being audio) and attack the Cybermen. Just as the humans are gaining the advantage, more Cybermen show up and it looks like DOOM!

But then Mondas finally gives out and the Cybermen all die, “leaking grey foam from their joints”. Yuck.

General War Hawk’s son contacts the base to let them know he’s fine – sounding chipper as all get out because he didn’t have to deal with those dickhead Cybermen – and all is well with the world. Well, except for the dead crew of the probe and General War Hawk being all disintegrated. And those three dead guards from the beginning. But Earth is okay! Hooray!
But… there is more. The Doctor is not okay. His excessive napping has had a dire and unexpected consequence. He stumbles back to the TARDIS, being followed by a frantic Ben and Polly (no idea how she got back from the Cyberbase). There, he collapses on the floor and undergoes and mysterious transformation into a totally different body!

Notes:
Overall I enjoyed this story more than I did An Unearthly Child. It is still somewhat slow paced and the Doctor is again absent for quite a bit of the action. I certainly don’t dislike William Hartnell, but I think maybe his stories just aren’t to my taste. But I’ll still check them out when I have the opportunity.

Come back next time for The Power of the Daleks, which is the next story in the series and the first full story for Patrick Troughton, the second Doctor!

Email ThisBlogThis!Share to TwitterShare to FacebookShare to Pinterest
Labels: doctor who, Earth Station One, Earth Station Who, Phantom Who, podcasts