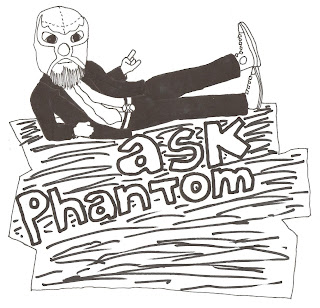 Disclaimer: Phantom Troublemaker is in no way affiliated with MattyCollector.com, Mattel, Scott Nite-Lik, ToyGuru, or any other toy company in any way. All answers provided in “Ask Phantom” are complete and total bullshit unless otherwise stated.

Hey there, Phantomaniacs, and welcome to the first installment of my all-new “Ask Phantom” column!

As a special unsolicited favor to Matty I have decided to delve into the forums over at MattyCollector.com and answer some of the unanswered questions! If you don’t know, there are sections there where “fans” (because we don’t like to use the “c-word”, it implies a financial obligation!) can submit burning questions about their favorite toy lines to the very people who run those lines!

Unfortunately, toy line managers tend to be busy raping childhoods and pissing on memories; so they can’t get to every question. That’s where I come in! Once a month I’ll select a few questions that have not been answered and answer them here at Needless Things!

Let’s see what the “fans” want to know!


Toyguru, every time I see the ‘Walkthrough’ videos with you and Pixel Dan you remind me of the character from the movie ‘Big’ starring Tom Hanks. Do you know this movie? Do you know that there is a scene in this movie where Tom Hanks plays with MOTU toys? I imagine your workday might be similar I know it is bit crazy but I would love to see a photo with you and Tom Hanks playing with MOTU/MOTUC toys. If you ever get the chance to do such a photo please do it. That would be fun to see and a great nod to the 80s ... and a nice promotion of MOTU. 

Good one Sabretooth,
I am a HUGE fan of the movie Big and the timing for your question couldn’t be better! I was waiting for the opportunity to announce that Matty has acquired the license to produce toys based on the movie Big! Starting next year, we will offer the MacMillan Toy Company Subscription service, where you can sign up to receive exclusive toys from and inspired by the movie Big! In order to manage expectations, I’ll tell you now that we do not have the license to produce likenesses of Tom Hanks, Elizabeth Perkins, David Moscow, Jared Rushton, Robert Loggia, or John Heard. But expect a Jon Lovitz as Scotty Brennen figure sometime in the first year of the sub, with a Quarterly Variant of Scotty in his plaid jacket to follow! Also, I am pleased to announce the subscription exclusive will be a prop replica of the famous foot-operated electric keyboard from the movie’s signature scene!

Also, I’m not going to even comment on the weird, fetish-y nature of your photo request you sick freak.

Who else can we contact when Digital River reps can't give us any answers on reinstatements/cancelations of subs/ missing orders and Evilskeletor doesn't reply to emails?

Well the DMC,
Why don’t you try telling your mommy? Or maybe you should call a waaahmbulance. Can I get you some cheese to go with that whine? But seriously, fans. We really don’t give a shit. At this point I’m considering just patching the Customer Service line into a Muzak network. That would be awesome! And I can’t believe you guys went for that whole “Evil Skeletor” thing. You know who Evil Skeletor is? Whoever brings our lunch! Yeah, for real – when we order out we tell the delivery guy he can have ten bucks if he’ll respond to a couple of e-mails! Dagmar from the Indian place is our favorite. His shit almost sounds real!

From The Red Knight:

Does Mattel have any idea how the softer plastics they are currently using for MOTUC will age? (ex: Shadow Weaver's cape, Fisto's chest armor)

Will this plastic get sticky or frosted as time goes on?

Hey The Red Knight,
We test all of our materials for at least a few minutes to make sure they won’t kill rats and stuff. As far as aging, what the fuck are we, time travelers? How the heck am I supposed to know what’s going to happen to this stuff after a few years? For all I know it’s going to turn radioactive and make your mom’s hair fall out. Sheesh, don’t bug me with stupid questions.

Do you have any special plans for the 100th figure?

Thanks for your time!

Abaddon_31,
Ohmigosh! You just asked the magic question, buddy! We were totally going to keep this a secret until San Diego Comic Con in July, but since you asked I’m going to share it right here on these forums that twelve people visit! Our super-duper extra-special 100th Masters of the Universe Classics figure is going to be a very special, one-time-only character designed by none other than Nickelback’s lead singer, Chad Kroeger! We’ve been working very closely with Mr. Kroeger over the last year to make sure that his vision for his character is achieved. So right now, for the first time, let me announce our 100th MOTUC figure, Nickelback! Here is Mr. Kroeger’s original concept sketch for the character, which our design team and the Four Horsemen have worked hard to bring to life: 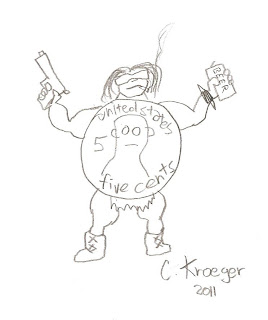 Nickelback® Bio
Real Name: Kroegor® of the House of Nickel
Using generic, terrible rock music taught by Hordak®, Nickelback® occasionally creates terrible forms of music and rock to annoy the Masters of the Universe®. His Nickel Armor® was first created to help Nickelback® penetrate the Sorceress® of Grayskull™. The original armor was destroyed by Lemmy™ after three strikes with his mighty battle axe, sending Nickelback® back behind the Wall. Nickelback® re-formed the armor 20 years later in an effort to combat a similar battle suit now worn by He-Man®. Although lacking the qualities of the original, his new armor was stronger and more obnoxious. Nickelback®, Evil Lord of Terrible Music™ is now protected by his magic Nickel Armor®!
You’re welcome, He-Fans and She-Ravers! It’s your subscription dollars that make extra-special things like this possible!

And now for one last question from the Ask Matty – Ghostbusters™ forum:

I am glad that Matty has offered Ghostbusters fans a great line of figures and props over the last couple of years.

Is there any chance that a firehouse would be in the works? That would be an amazing addition to this collection.

Halloween Undead,
Are you seriously still asking questions about the Ghostbusters toys? That line is deader than your grandma! Bwahahahahahaha!