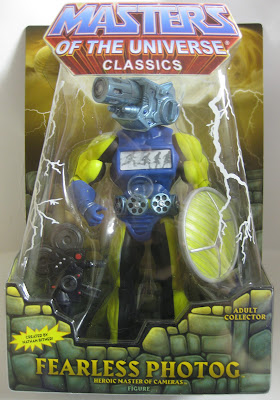 Fearless Photog is the first of Mattel’s Masters of the Universe 30th Anniversary figures. And pretty much the only one that makes any kind of sense as an anniversary figure.
I’m not going to bitch any more than I already have about what I went through to get this guy. Let’s get straight into the action!
Photog here actually has a history with the Masters of the Universe toy line, unlike Draego-Man, Spector, or even Sir Laser Lot. This camera-headed warrior was actually created by a young man named Nathan Bitner way back in 1986. You can and should read the whole story here.
Because I am a huge fan of X-Entertainment and weirdness in general I was super stoked about Photog. I thought he was an excellent choice for the first 30th Anniversary figure and really symbolized the relationship between the fans and the MOTU toy lines.
I suppose the most striking thing about Photog is that he is a vampire in a blue and yellow track suit with a camera for a head. Oh, yes. You read that right. Photog uses his camera head to drain the life force of his foes. The silhouettes on his chest represent his conquered enemies. You know, like Freddy Krueger’s chest of souls. Considering all of that I really don’t see how Photog is a good guy because pretty much everything about him is fairly fucked up.

And tell me the first thing you think of when you see that head isn’t him spying on Teela in the bath. 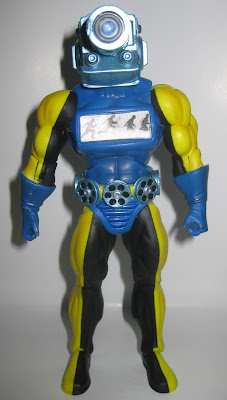 First Glance: Striking was definitely the right word. This guy makes Playmates’ Ninja Turtles figures seem refined and sensible. What an insane mess. I love it. 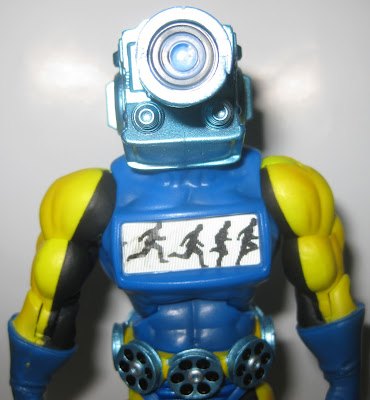 Sculpt: Obviously Photog’s head is unique. His chest and belt are new as well. As far as articulation goes, he has the standard MOTUC treatment. All of the joints on my Photog are tight and mobile. He can hold poses just fine. 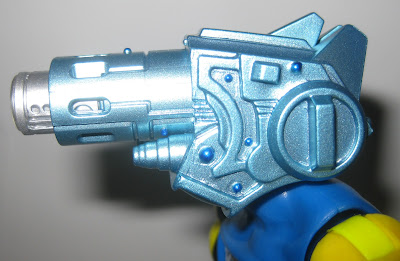 The head is actually very impressive. The camera is covered in detail and despite what you might suspect (I certainly suspected) is very well balanced and can hold a position. The fact that the lens telescopes is just neat-o. It’s one of those things the Horsemen threw in that adds so much character and value to an already fun figure.
The chest is a cool robotic-looking sculpt with an indentation to accommodate the lenticular piece, which is not a sticker. Well, it is held in place with adhesive, but it is much thicker and more solid than just a sticker. It’s a quality piece of decoration. The lenticular action works very nicely as well.
The belt is basically the Roboto/Man-E-Faces/Optikk trunks with a new belt sculpted on. The film reels look absolutely ludicrous, but in a good way. All of the detail is sculpted and they are sturdily attached. 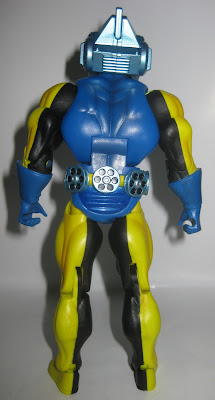 Design: Again, the camera head looks very good. The lines are shaded and the lens is a clear plastic (mine was not cracked).
Blue, black, and yellow are the main colors here, but there are enough little details and spreading of the colors that Photog doesn’t seem bland. Rather, he looks like something a college-level graphic designer might submit as a mascot. He may be goofy, but he is designed well.
My figure doesn’t have any smudges or errors. The lines are tight and well-placed, which is impressive given the black and yellow combination. 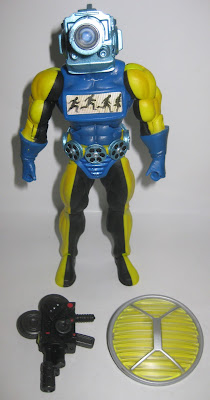 Accessories: Photog comes with a hand held camera gun(?) and a shield.
The camera looks good. Photog can hold it well and it isn’t too bendy. It does add to his Ninja Turtle feel for some reason. The fact that a guy with a camera for a head carries around another camera is an extremely old-school TMNT cartoon idea. 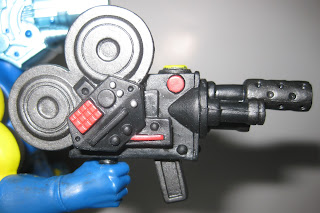 Photog’s shield is one of my favorite accessories in the MOTUC line. It just looks great and unique. There is a clear plastic piece on top of the yellow base and it looks very cool. Very 80’s. 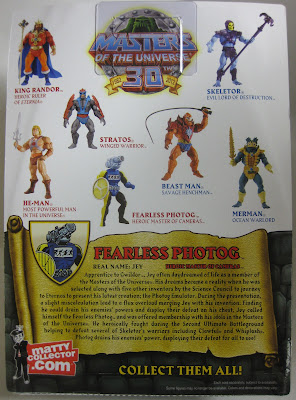 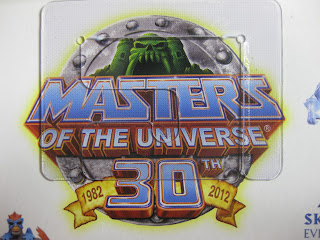 Packaging: Standard MOTUC packaging. I still really like the design and find it to be one of the only packaging styles that has not gotten stale. Something about the look of these toys in the package is just more exciting than other lines. Fearless Photog’s real name is Jay. I have a friend named Jay and now I can’t help but imagine him in a Photog costume sometimes. 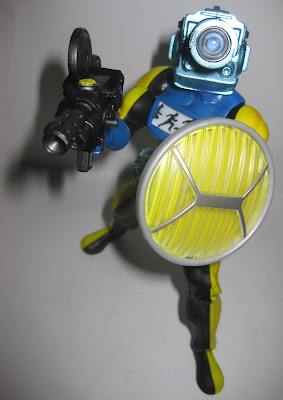 Overall: Photog does not disappoint. Granted, if you hate the design in the first place I don’t think having him in hand is going to change your mind. But he is extremely successful at capturing the original design. Photog is fun to look at and to play with and that’s about all you can ask for.
5 out of 5
This is another one of those figures that I wouldn’t change a thing about. You can get him from BigBad or check out some eBay auctions.
Until next time, stay creepy
-Phantom
Posted by Phantom Troublemaker at 11:00:00 AM