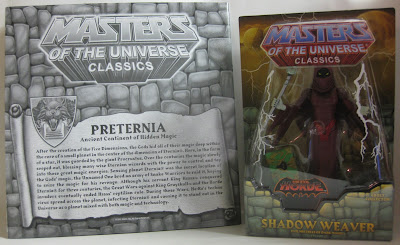 I didn’t even know who Shadow Weaver was when she was announced as the Club Eternia Exclusive figure last year at San Diego Comic Con. Not because she isn’t cool or anything, but because I never watched the She-Ra cartoon.
When you’re a kid gender definitions are a whole lot different. As a boy, you had better be into GI Joe and Transformers and football and “Smear the Queer” or you’re going to get beat up. And no – I don’t care if Strawberry Shortcake smells nice or even if He-Man shows up in some girl cartoon – you had better get back to throwing that baseball, sissy!
So anyway, no way was I going to watch a girl cartoon.
But now that I’m older and wiser (and She-Ra is available for free on Netflix), I’ve actually watched some episodes and I can say the following with utter confidence:

She-Ra: Princess of Power is a very, very stupid cartoon.
But it is waaay cooler than He-Man and the Masters of the Universe.
It doesn’t matter that Adora’s friends are all just shy of being non-functionally retarded. It doesn’t matter that Hordak snorts like an excited hog every fucking time he utters more than two syllables. It doesn’t matter that Madame Razz is the absolute, bottom-of-the-barrel worst of all of the made-up-for-the-cartoon annoying sidekicks to come out of the entire decade of the 80’s.
None of that matters. You know why?
Because Filmation was smart enough to stock Hordak’s army with robots that could be absolutely murdered by the boatload every single episode.
I can’t remember exactly why (I’m sure it had to do with some overbearing government agency because pretty much every problem in this country does), but the He-Man cartoon could not depict physical violence against sentient creatures (or something – I’m pretty sure he could power slam dinosaurs all day long, just not actual speaking creatures like Beast Man).
So while that moron He-Man was stuck over on Eternia throwing rocks and chairs at Trap-Jaw and his ilk, the Princess of Power was using the Honor of Grayskull to slaughter robots by the thousands.
So anyway, I’ve seen some She-Ra now and recognize it as being better than He-Man.
Oh, and Shadow Weaver is pretty awesome. From what I understand Hordak is already a master sorcerer, so to be his personal magic-user is pretty impressive. 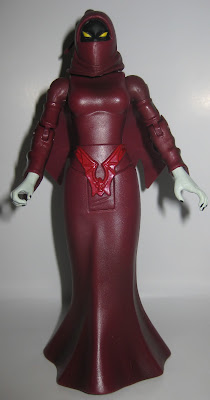 First Glance: Yeah – she does look really cool and is a unique figure amongst the rest of the line. I get why people were so excited about her. 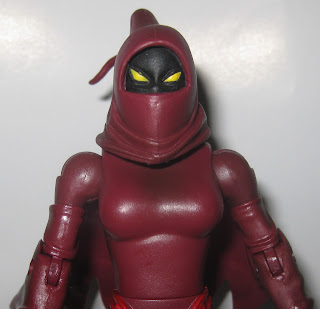 Sculpt: Shadow Weaver is a 100% new sculpt; a rarity in the MOTUC line and even more impressive because I don’t know that any of her parts can be used elsewhere (don’t take my word on that though, my knowledge of the characters is not all-encompassing).
The figure is very well articulated for what I thought was going to be something of a statue. She has ball joints at the neck and shoulders; swivels at the biceps, wrists, and waist; and pivots at the elbows and hips.
The neck joint is somewhat restricted by her hood, but what are you gonna do? Her arms move surprisingly well given the cape thingy attached to her back. I like the way the Horsemen designed this portion and I’m glad they went with a soft plastic rather than fabric.
I have to give the Horsemen a lot of credit for not resorting to soft goods at any point in this line. While there are a few instances where I do like specific soft goods items, for the most part I don’t feel they belong in toy lines smaller than 1/6th scale. And when they are used sporadically it throws the look of your shelf off. A ton of my Star Wars toys have soft cloaks, robes, skirts, and whatnot; and while some of it works very well it means the line will never be uniform in the way that MOTUC and DCUC are. Taken as whole – despite whatever flaws may be present – the lines are beautiful and present a singular vision.
This may seem to go against my previously stated belief that the female figures should have alternate heads with rooted hair, but those would be an option. I still think those would be worth pursuing in the future. Actually, I keep seeing packs of heads suggested on the Matty forums and I think a pack of female heads with rooted hair would be the very best use of this idea.
The actual sculpt on this figure is excellent. The hood and face manage to look very distinctive despite the lack of actual… uh… face. The eyes are sculpted in rather than painted on. The way the little cape part is sculpted and attached and the way the sleeves are done is very nice. Due to the hang of the ends of the sleeves you’re pretty much stuck posing her with her arms up, but better that than tight sleeves. Her hands are nicely creepy looking and the left is fairly ingenious, as it can hold the included spellbook or appear to be casting.
The Horde crest on Shadow Weaver’s midriff looks cool and distracts you from the hip joint fairly well.
Note: Be very careful when utilizing Shadow Weaver’s hip hinge. I had my thumb in the wrong place and got bit: 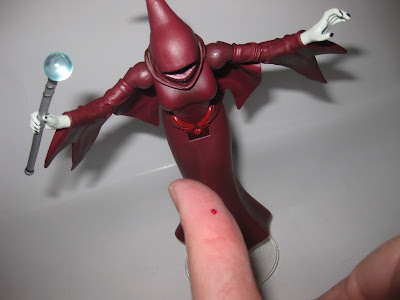 It hurt like a motherfucker.
There is a hole in Shadow Weaver’s bottom (shut up) to inset the plug (no, seriously – stop it) on the top of the included translucent stand. I was a little nervous doing this because it kind of felt like the stand might prefer exploding into pieces rather than going in that hole. But I was careful and got it in and it works great. 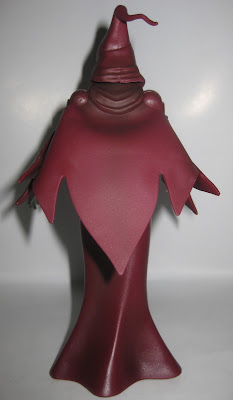 Design: There’s actually not a whole lot to say here. The robe is a nice color with the sort of shading you’d expect. The paint jobs are one of the things that make this line so great. From a distance (or in the online pics) they look like basic 80’s toy paint jobs, but once you get up close there is just so much detail.
The hands look good and – amusingly – Shadow Weaver has painted nails just like all the other gals.
The paint deco on mine is error-free, but there really weren’t a whole lot of places to screw up. 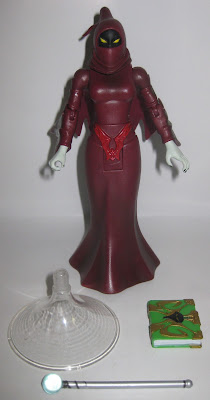 Accessories: Shadow Weaver comes with her wand, her spellbook, a stand, and a map of Preternia.
The wand is straight! We hit a trifecta this month for accessory integrity! Sorceress, Fisto, and Shadow Weaver all came with accessories that by all rights should have been bent up by Mattel’s incompetent package designers. But they weren’t. Amazing. Anyway, the wand looks really cool with the crystal at the top and the details down the haft. The figure can hold it well.
The spellbook is awesome. The clasps and sigil on the front look great and it has a very interesting paint job. All the detailing on mine is very good and accurate. I’m so impressed by the fact that Shadow Weaver can hold it.
The stand feels just a bit flimsy, but if you’re careful with it you should be fine. It achieves about as good a floating effect as you’re going to get without fishing line.
The Preternia map is the best of the three they’ve done. It features the three towers and, most importantly, Megator: 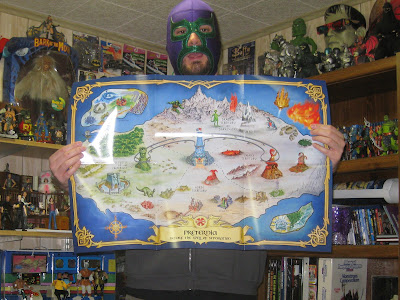 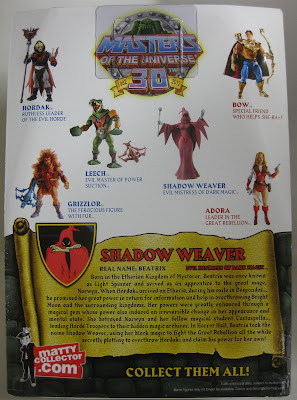 Packaging: The bio they cooked up for Shadow Weaver is one of the best so far. As I was reading it I kept wishing there was a comic to illustrate the narrative in detail. With all the wacky comic properties that are out there right now, how is there no company interested in adapting the MOTUC bios? Or maybe they’re waiting until they’re mostly finished so as not to lock in any continuity errors. Either way, I hope someday we get a cohesive story to go along with what has been created in this new iteration of Masters of the Universe. 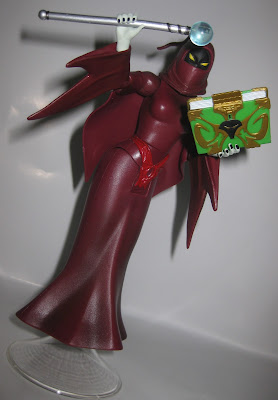 Overall: This is an awesome figure. Well worthy of being the Club Exclusive. I was doubtful initially, but once in hand Shadow Weaver feels special enough and unique enough to have earned the slot.
5 out of 5
Even though she wounded me.
I would say this one would be worth around $50 + shipping to track down if you can. She’s that cool. I don’t have any idea what she’s going for on the secondary market right now, but it’s probably more than that. Wait for a con if you can.
Until next time, stay creepy 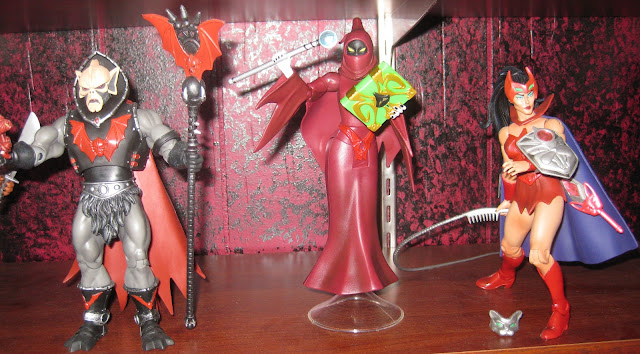