Toy Review – Masters of the Universe Classics Fisto By Mattel 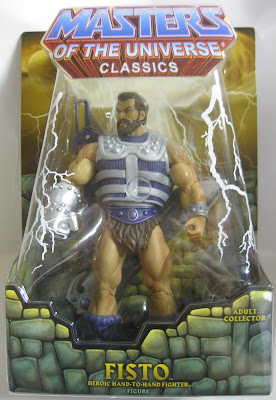 Sometimes there is a character or figure from a line that has one specific element that stands out. Something that makes what might be an otherwise pedestrian offering shine. One seemingly minor detail that grabs my attention and simply doesn’t let it go. Grabs it with a giant metal fist.
This figure has a giant metal fist and thank the gods of toydom that the personnel at Mattel back in the 80’s said, “Fuck it” and just went ahead and named him Fisto.
I know it’s not as dirty as “The Fister” or “Sir Fists A Lot”, but c’mon man – it’s still pretty damn hilarious.

I specifically remember disliking the original Fisto figure. It seemed to me like they were running short of ideas when a big metal hand was your defining deformity. How the heck was a metal hand going to compete with a fish man or a human skunk… you know what? Never mind. But I was not a big fan of Fisto and I don’t even remember if he was on the cartoon or not.
But then came the 2002 revival. Back when it originally aired I only saw a few episodes here and there because I think it was one of those shows that got rescheduled all the time, but a couple of years ago I bought the entire series on DVD and was able to catch up. Not only is the series absolutely awesome, it made Fisto a great character and a total badass.
He is introduced as basically a drunken layabout, but turns out to be Duncan’s disgraced and estranged brother – Malcolm. A great story of redemption follows. Malcolm saves He-Man and his pals but gets his giant hand crushed in the process, which leads to Man-At-Arms constructing a new, metal giant hand for his brother. Fisto joins the Masters and becomes the hero he always should have been.
But I didn’t know any of that back in 2002 when I was collecting the toys. I just knew that yeah, he was purple, but he just didn’t look that interesting. Now that I know the character’s updated story and am a little more invested I like him; but does that mean I’m going to like this new Fisto?
Note: Just to avoid confusion – I am going to be referring to Fisto’s metal fist a lot over the course of this article. The toy’s fist is not actually metal. 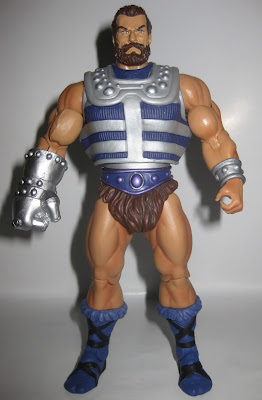 First Glance: This Fisto look more dynamic than his predecessors. It also looks like there’s a good bit of stuff packed in with this guy. 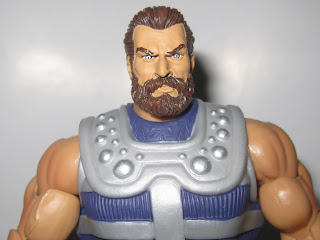 Sculpt: Fisto has the basic human MOTUC body. There is one difference, though, and it’s a big one. NO ANKLE HOLES! In all honesty, the ankle holes didn’t bother me a whole lot on the older figures. As long as the joint pegs are colored the same as the surrounding piece I don’t care too much, but now that those holes are filled in I realize how much better it looks. Nice going, Horsemen!
All of the joints on my Fisto are tight and mobile. I had read that the metal fist was not meant to swivel, but that it does. This is the opposite of my Clawful, whose claw is supposed to turn but does not. I’m okay with that trade-off since Clawful sucks and Fisto is awesome. I can’t imagine why that fist would not be designed to swivel. One of the first things I did when posing Fisto for the photographs was turn that thing. I would have been extremely irritated if it didn’t move.
As for the fist itself, it looks awesome. Initially I was bothered that it is totally closed and can’t hold anything, but now I think that was a good call. That fist was made for punchin’. It is the weapon. It would actually be pretty stupid to stick a sword in that hand. Like putting a grenade on an atomic bomb. But anyway, the fist looks really good and is sized perfectly. I’m glad it isn’t absurdly large. The lines and plating are nice and not overly done. As much as I liked the hyper-detailing of the 2002 figures, I do sometimes appreciate the restraint within the Classics line. There’s plenty of detail here without all kinds of mesh and gears and whatnot. Honestly, Battle Fist (the 2002 figure’s name thanks to Kit Fisto over at Hasbro) looked kind of stupid with his massive, super-involved hand. 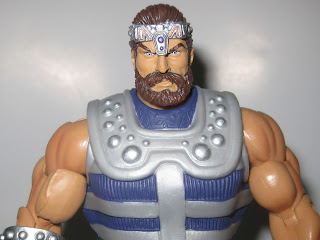 Fisto comes with two heads – one with a circlet and one without (there has to be a name for that piece of armor that doesn’t sound as dainty as “circlet”). They share the exact same face and the Horsemen did a fantastic job making it look weathered and full of character. Fisto’s face tells a story perhaps better than any other MOTUC figure thus far. They really went with the “Duncan’s older brother” concept. I thought I would prefer the unadorned head, but now that I’ve got the figure in hand the armored version is pretty cool. Very much like Conan.
Fisto also has an armored shirt sort of thing made out of a soft vinyl (or whatever). It appears to be removable, but it’s another one of those items that I don’t see any reason to mess with. The chest piece does look very good and is another case where being a separate piece is more effective than if it were simply molded as the torso. There is a huge loop sculpted onto the back meant to house the gigantic buster sword. It looks bizarre when not in use, but I’m such a sucker for figures having storage points that I don’t care. 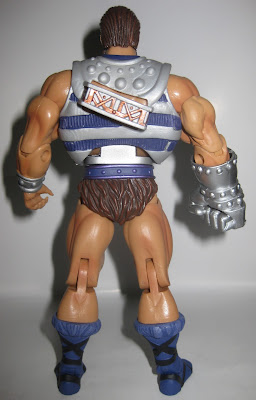 Design: Fisto may seem a bit plain at first glance, but his deco is really as much as is needed and is done very well. The detailing on his knuckles, circlet, and the sword storage loop on his back are very good and very tight. My only concern is for the integrity of the paint on that soft chest piece, but it all looks good right now. Which is more than I can say for that piece of crap, Snout Spout.
Mattel made the right call on this one and colored his lower torso to match his armored shirt. Fisto would have looked really silly in a belly shirt.
Both heads look very good. As with almost every MOTUC figure I own, the features are centered and perfectly placed. 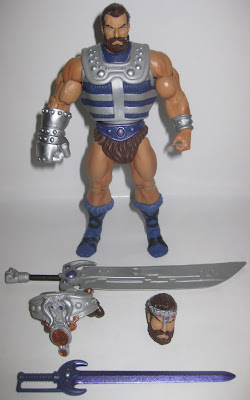 Accessories: Fisto has a great set of accessories. Included with the figure are an extra head, a belt, a standard sword, and what I can only describe as a buster sword.
The extra head is the 2002 version. It looks great and is my preferred noggin for this guy. 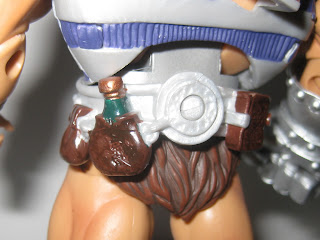 The belt is also from Battle Fist and it’s packed with detail. The front portion looks very cool and adds an awful lot to the figure’s individuality. Sculpted on the back are a tiny book, a bottle (or pouch), and (some other thing). These neat little details add so much character to the figure.
The regular sword is a repaint of Tri-Klops’ sword. It looks cool in purple. This is neither here nor there, but I actually need an extra one of these in green for my 2002 Tri-Klops. I have no idea what happened to his. Also, I was absolutely shocked to open my figure and discover that this sword was not bent. Not even a little. It’s made of a fairly sturdy plastic, but Mattel has always done wonders in the past figuring out how to bend or deform accessories and figures. Even if the liner tray was shaped in such a way to prevent bending, Mattel always seemed to be able to create a funky pose with the figure or throw a couple of rubber bands around something to bend it up real good. Not so this time. 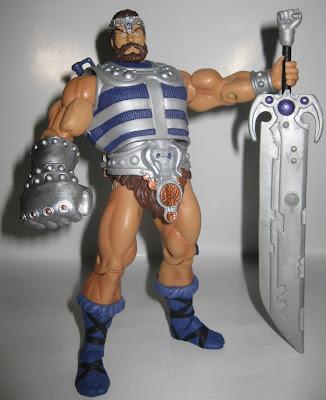 Finally, the buster sword (that’s what I’m calling it because I will always be a Final Fantasy VII nerd – it and Chrono Trigger are my favorite RPGs ever) is AWESOME. It’s size is totally ridiculous and as much as I’m glad Fisto’s fist isn’t huge; I’m thrilled they went nuts on this sword. The thing looks great and has a huge amount of detail. And the fact that it has a fist for a pommel is just silly genius. 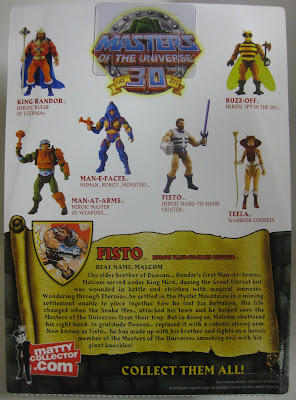 Packaging: Supposedly the packaging on these figures is thinner now, but I don’t care. I get that MOC collectors do, but I (obviously) open all of my MOTUC. The mailer boxes are also a tighter fit. Fisto in particular was jammed in pretty good, which made me laugh. But all in all I still like the MOTUC packaging – particularly the bios on the back that attempt to meld what are essentially four different mythologies together. 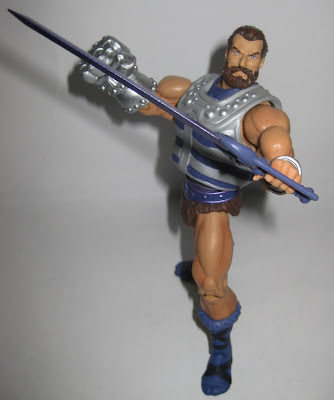 Overall: Fisto is fantastic and a must-have for your collection. I am so impressed with the choices made for this figure I can scarcely believe it. I was glad to be getting him just for the humor inherent in a dude named “Fisto”, but now I am thrilled to own this excellent figure.
5 out of 5 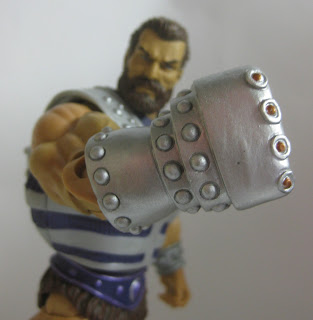 Yep. I can’t think of a single thing I’d do to improve Fisto. You should definitely go buy one if you collect this line at all. If you were waiting for affirmation before springing for this guy, this is it. He’s awesome. 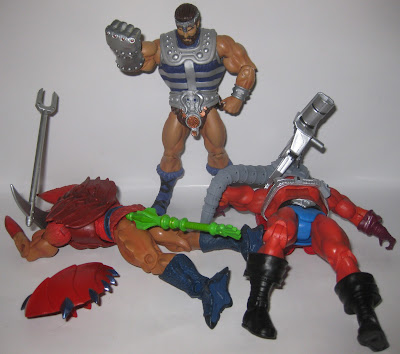 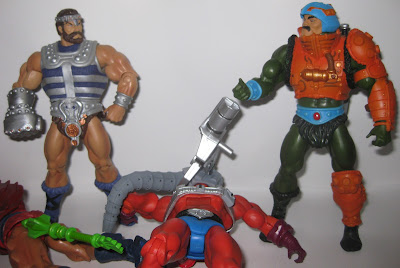 “I think you should consider a new battle cry.”
And as if that wasn't enough, I'm adding ONE WHOLE PHOTO to each of my posts now just to show you where in my collection each of these guys ends up. I meant to do it yesterday with Sorceress and didn't, but I went back and fixed it. 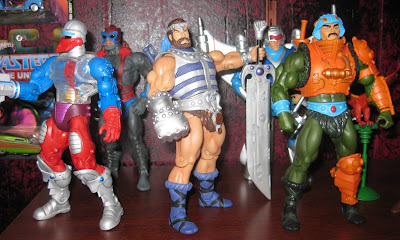