Toy Review – Masters of the Universe Classics Sorceress By Mattel 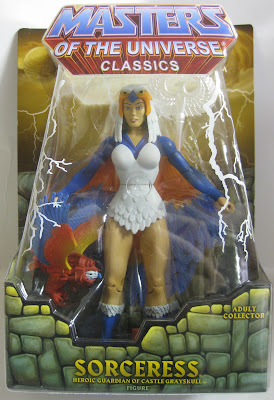 February presented me with one figure I was beyond stoked to be getting (and didn’t, but then I did – so his review is forthcoming) and a trifecta of figures that I didn’t dislike, but wasn’t necessarily enthused about. I’d be fine adding them to my collection, but might not have specifically desired them.
The first of those figures is the Sorceress.
Yeah, I know. How could I possibly be anything less than thrilled to be getting one of the most powerful and important characters in the whole Masters of the Universe franchise? I dunno. The classic Sorceress design just never really did anything for me. I mean, she looks fine, but in comparison to the 2002 version just looks a bit like a mascot for a WNBA team. 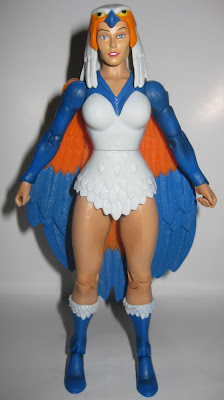 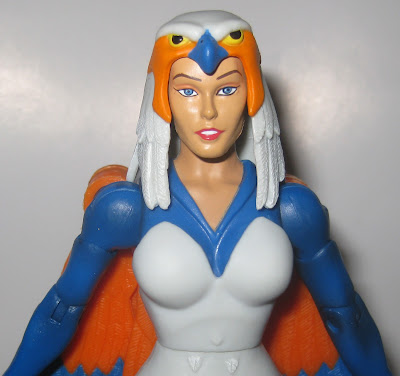 Sculpt: Let’s go ahead and get the awful, ugly shoulder pegs out of the way. 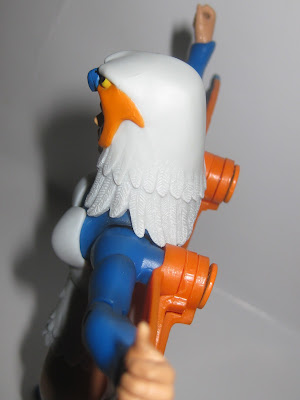 They’re an eyesore. But I can’t think of a better way the wings could have been done. The joints actually work very well. The wings fold out nicely and have stops to help align the wing parts so they don’t go totally crazy when you raise her arms and you have a pretty good feel for how things are supposed to line up. I also had to consider the fact that the Sorceress still has full arm articulation. The Horsemen didn’t sacrifice a single joint – not even the shoulder – when designing this.
So what I’m saying is while the shoulders are visually unappealing I think they are the best solution available. Fabric wouldn’t have looked good. Nor would a material soft enough to fold. The only other thing I can think of would have been a separate pair of immobile arms with the wings extended. I’m pretty sure that wouldn’t have fit into the budget and I’m not even positive it would have been as desirable as mobile wings. 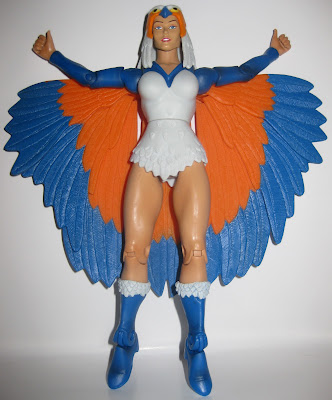 Okay – on to the rest.
Sorceress has the new female buck, which means that her hips do not swivel and she has no abdominal rocker joint. I’m okay with the absence of the latter, but I really hate the former being gone. I notice it every time when I’m photographing. I’ll try to twist the legs and be like, “Why aren’t these moving?” and then realize what’s up. It’s irritating and a pretty big omission from newer figures. I wouldn’t miss it if we’d never had it, but several of my standard poses require those swivels at the top of the thigh.
Otherwise the Sorceress is articulated the same as every other MOTUC female. She does have the swivels at the top of her boots. The movement of her neck joint is out of necessity limited by her headdress. Not much to be done about that.
Otherwise she’s fairly basic. Her feathered skirt is well done. The way her top blends into it is clever and I like that they didn’t go and sculpt a million individual feathers into her clothes. It would have looked weird. The Sorceress’ headdress looks solid and is almost regal enough to not look like a mascot.
I’m not so crazy about her face. Not because it’s bad, but because it looks very much like the Filmation Sorceress. I’d prefer a more serious, narrow face. She looks just a bit goofy here.
The wings – shoulder pegs aside – look very cool. The feathers look great and the mechanism is solid. The wings look good whether they are folded up or spread. 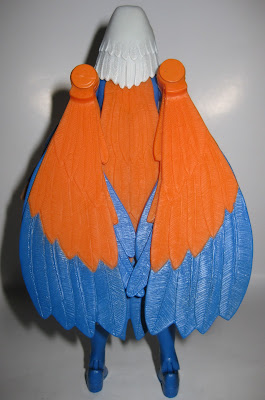 Design: The Sorceress’ face is detailed well. Her lips and teeth are distinct and her eyes are placed well. The bird headdress looks great, as do the wings. There isn’t so much gradation between the blues, oranges, and whites as there are defined lines; but everything looks good. I’d also like to mention again that I appreciate the Horsemen putting fingernails on these gals. 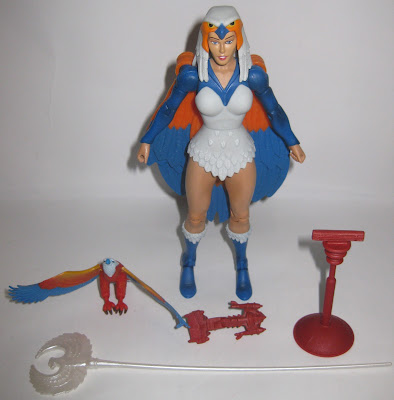 Accessories: The Sorceress comes with a staff, a bird, a bird stand, and a bird laser (or whatever).

I know it would have been ridiculous to not include the Sorceress’ alternate form her. I’m just tired of birds in this line. This is the same bird, stand, and harness thing as all the others, but in different colors. It all looks fine. Except for the fact that the very edge of my bird’s left wing is all bent up from the packaging. But whatever.
The staff is a pearlescent white color and through some act of God is not bent. Mine is almost perfectly straight. Is Mattel learning or is this an accident? The sculpt on the head is very nice and has just enough fine detail to look good and not like an actual bird sitting on top of a stick. 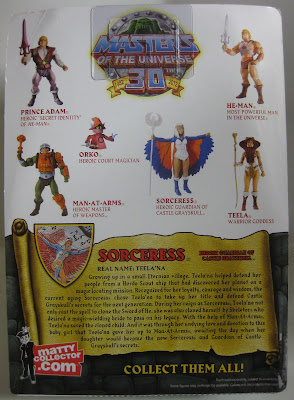 Packaging: The familiar Masters of the Universe Classics packaging. I like it and it is interesting that the 30th Anniversary is noted even on the backs of the figures from the regular line. Not that I would have expected any less, but it is neat. I like the logo a lot. I’d by a shirt of that. Also interesting is the fact that Skeletor created Teela with the intention that she’d be his brood mare. Yuck. 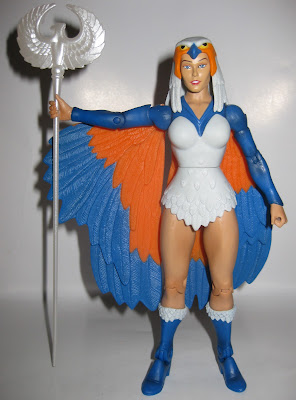 Overall: I’m a little torn. I suppose this figure is as good as you could reasonably expect her to be. Shy of making two completely different torsos or something I don’t know how she could be better. But I do feel like those pegs could have been smaller somehow.
4 out of 5
She’s good. If you have to have a Sorceress in your collection you should get her, but she isn’t mind-blowingly great or anything. I’d much rather have a 2002 version. 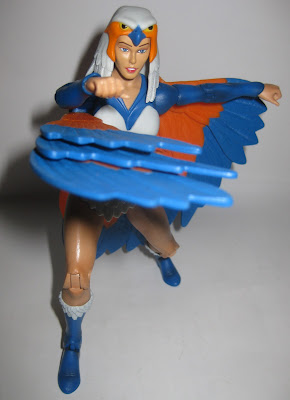 UPDATED: Forgot to add in my collection pic: 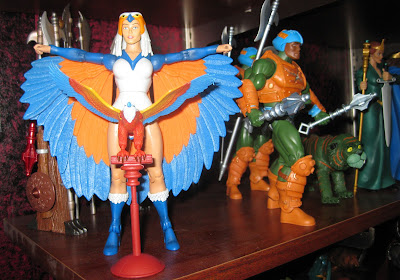