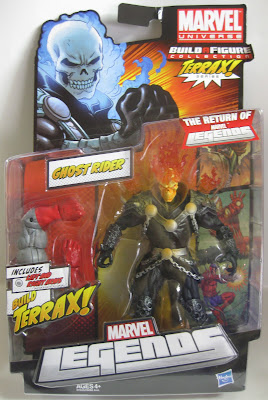 If Rob Halford, Kerry King, Dave Mustaine, and King Diamond got together and designed a superhero, this is probably what it would look like.
I wasn’t going to buy this particular Ghost Rider because I didn’t know where the heck this look came from (and still don’t – Jason Aaron’s run, maybe? I can’t seem to find anywhere that has the info) and I tend to avoid variations in general, let alone ones that I’m not even familiar with. But then I saw the standard version of this one at Toys R Us (blue flames rather than orange) and he looked
SO FUCKING METAL
I knew I would have to buy one. But I also knew I could stand to wait to save a couple of bucks.

A few days later I saw this orange variant at Walmart and thought it looked even cooler. But I second-guessed myself and passed on him. You can read that little story here if you want.
So now I’ve got this rad orange heavy metal album cover Ghost Rider and I am extremely happy with him. But with all that ornamentation and armor and crap, is he actually a good action figure? 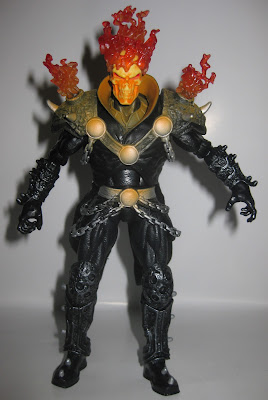 First Glance: So metal. I bet Brian Posehn tries to fuck this figure when he gets one. 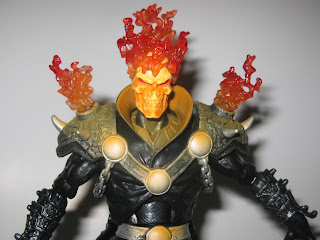 Sculpt: Upon initial inspection it looks like this Ghost Rider isn’t going to do much more than just stand around. What with the shoulder business and the waist piece it seems like he could barely move at all. But looks can be deceiving. Thanks to an extremely clever design, every joint on this amazingly well articulated figure can be pretty much fully utilized without the extra pieces being moved out of place in an unappealing way.
Ghost Rider has ball joints at the neck, shoulders, wrists, hips, and ankles. There are swivels at the tops of the thighs and biceps. He has double jointed elbows and knees and a rocker joint on his upper abdomen. Everything you could really want from a figure in this scale. Every joint is tight and moves without any trouble, though it does take a little work to get his hips and shoulders moving the right way because of the jacket and waist pieces. This is not a negative, just how the figure is and it really isn’t that big of a deal.
The actual sculpt is very good and unique to this figure. The Rider has some nice bits of armor that lend themselves to good, concealed articulation. Kneepads cover up the double jointed knees that can sometimes look so odd and his wrist joints are overlapped by gauntlets that look cool but don’t really hamper movement.
The belt thing on his waist looks very cool. It’s loose enough that it doesn’t interfere with leg movement and is sculpted so well that you don’t even realize this until you start playing with the figure – it sits very well on the waist and blends in with the rest of the figure. The jacket/shoulder pad piece works the same way. It is loose enough that it allows the arms and torso to move as much as you might want, but fits so well you don’t even realize it is a separate piece until you’re up close. Both of these pieces are brilliantly done. The spurts of flame coming out of the shoulders look awesome. I don’t know what the story is here, but they are sculpted fantastically and don’t have the balance issues you might expect from sizeable extrusions just sticking out of the top of a loose part. The only thing I might complain about are the chains. I’d prefer it if they were actual metal chains like we’ve seen on some other figures, but this is a pretty nitpicky gripe and isn’t a huge deal, especially considering this Ghost Rider doesn’t have a chain weapon to make these plastic ones look awkward. I do like the coat tails on the back. I suppose that’s how this version of the Spirit of Vengeance was drawn, but it looks very cool and gives a figure that’s already loaded with character even more.
Speaking of character, Ghost Rider’s head is very well done and shows a lot of personality for what is basically a skull. The shape and positioning of the jaw, eye sockets, and nasal passages make for a very angry, determined look. I guess the flames help as well. All of it is well done and manages to not look too cartoony. 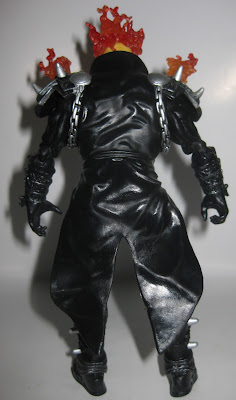 Design: As good as the sculpt is, it wouldn’t mean anything is the figure weren’t so competently decorated. The varying shades and glosses of black and detailing on the armor pieces look nice. The applications are near-perfect in accuracy and placement. The skull is nicely highlighted and the flames – a great translucent orange on this variant – are blended perfectly. What really gives this Ghost Rider a little bit of extra awesome are the highlights the designers went with. There are touches of color that match up with the flames to create the illusion that the fire is reflecting off of the Rider’s body in certain places. It’s super cool. 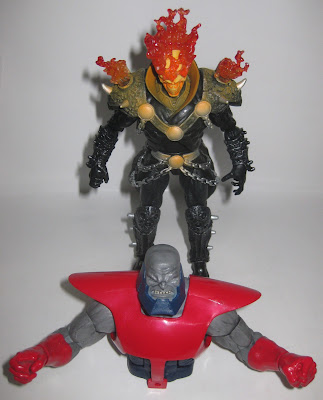 Accessories: Ghost Rider comes with Terrax’s arms. It’s been so long since I built a figure I got all excited and stuck them on his torso before I took a picture. But you get the idea. The arms are fine, but I’m a little disappointed the gloves are just painted on. 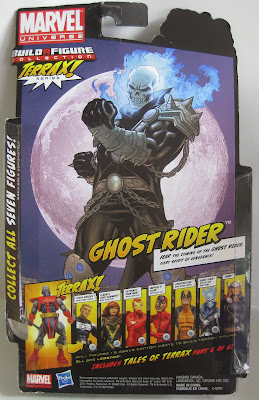 Packaging: It’s colorful and eye-catching. The art is very generic, but not bad. The blister is Hasbro’s standard – glued on with tape on the back. I’m not crazy about this kind, but it’s still way better than a clamshell. 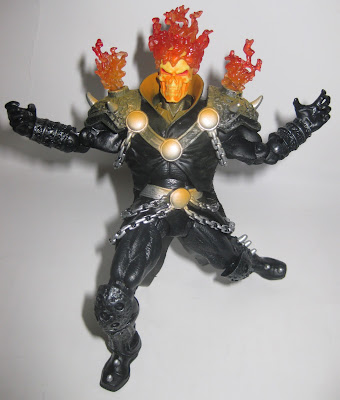 Overall: There are a couple of bits that are a little wonky, but overall this is a kickass Rider.Uh, Walker. I guess.
4 out of 5
Buy this one or the blue one, but you should definitely own this Ghost Rider. The only thing that would make it better would be an alternate Nicholas Cage head. Yes – I know this isn’t the movie version. I don’t care.
Ladies and gentlemen, let me introduce to you the World's Greatest Action Figure Band,
Grinding Deathfuck 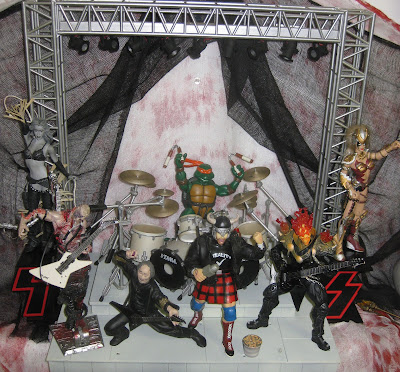 Formed however many years ago it was by a big nerd, Grinding Deathfuck has been rocking the Hell out of shelves for what may well be over a decade. When they caught sight of this new Ghost Rider they immediately sacrificed their old lead guitarist to Testicles, the god of manliness and handed the Rider a six-string. 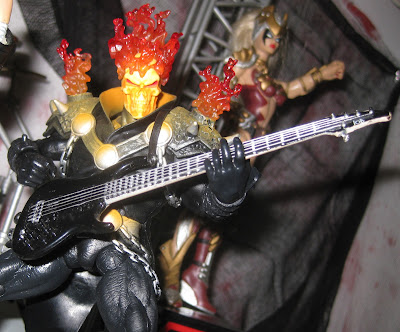