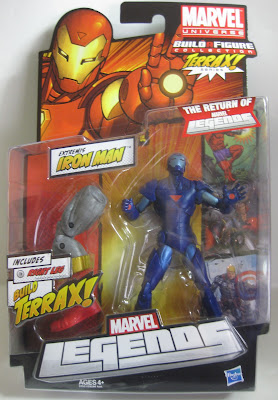 I thought I would buy Hope and Constrictor and be done with the first series of Hasbro’s new Marvel Legends line.
I should have known better.
When I bought those two figures at the inflated Toys R Us price I knew there was a good chance I was going to end up with some more. Steve Rogers looked very cool and that wacky Ghost Rider just looked too metal to pass up. But I bought Hope and Constrictor like a good, financially aware collector and moved on.

And then the other day I stopped at Walmart on the way into work to get some cereal. Due to the awful hours that I work I’ll end up at Walmart at odd times of the day. If I stop on the way in for a day shift I’m there around 4:30 AM and if I stop in after a night shift it’s around 6:00 AM. These are primo times to hit the toy aisle, as that’s usually when they’re restocking or putting out new stuff. So when I went in the other morning for some cereal (I like the new peanut butter Cheerios a lot, if you’re wondering) I naturally checked the toy aisle and saw that they had Thor and the variants of Iron Man and Ghost Rider.
I don’t need Thor, as I’ve got the SDCC version. The Ghost Rider variant looked awesome. I dig the blue flames on the regular one, but the orange flames made him look like something from an 80’s metal album cover. The Extremis Iron Man variant (I guess that’s Stealth Armor, right?) looked way cooler than the regular one, which I had seen at Toys R Us and been fairly uninterested in.
But I didn’t need either one. I’ve got a perfectly good Johnny Blaze Ghost Rider and more Iron Mans than you could shake a stick at. So I left them there, and then went into work where I sat and felt stupid for twelve hours because I didn’t buy them.
When was I going to see those variants again (although now I’m suspecting they’re going to be somewhat common)? I already thought I’d probably end up buying that Steve Rogers and I really liked the Ghost Rider. That meant I’d be two figures away from building that stupid Terrax anyway. Dammit.
So over the course of the day I convinced myself I needed to stop by the Walmart on the way home and see if maybe, somehow, through a toy miracle, those figures were still sitting on that shelf. And then there was another hour that it took to get from work to the Walmart in question. I thought there was no way they’d still be there after fourteen hours (4:30 Am to 6:30 PM – prime shopping time).
But they were. I couldn’t believe it, but all three of the figures that had been sitting on that shelf that morning were in the exact same spot, only with a price sticker under them now. So I bought Iron Man and Ghost Rider and went home (they were $15.44 – not quite the rumored $11.99). 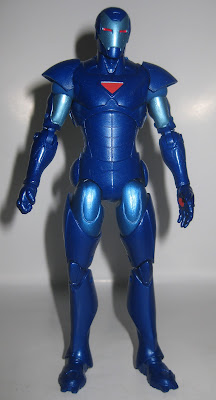 First Glance: Even though he’s fairly monochromatic, this blue Iron Man is more eye-catching than the red and gold version. 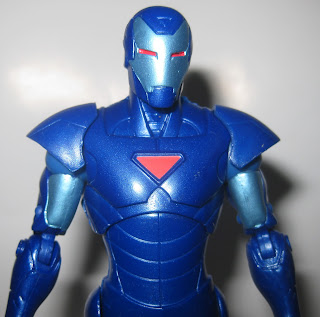 Sculpt: The Extremis Iron Man is very streamlined. He almost looks like something from an animated series, which is appropriate because “Extremis” artist Adi Granov’s style has the look of high-quality cinematic animation.
The lines and shape on this Iron Man are much smoother than the movie style figures we’ve gotten for the past several years. All of the joints and armor pieces blend very well into one another.
There are ball joints at the neck, shoulders, hips, wrists, and maybe ankles. I can’t quite tell there because the calf pieces hang down over them and limit the movement, but you do have a small degree of swivel and pivot. The neck joint has a very wide range of up-and-down movement, which is nice because you can actually make him look like he’s flying. 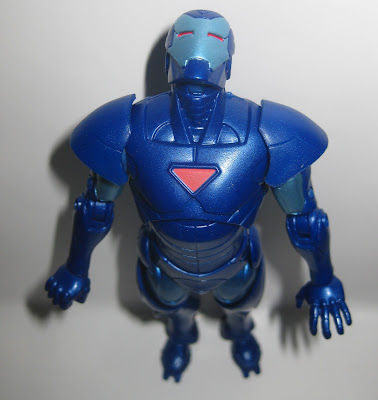 He has double jointed knees and elbows and they look great and function well. Hasbro has really perfected these particular types of joints, both in form and in when to use them. He also sports a rocker joint just under his chest that helps with the whole flying look.
There are a couple of clever bits of armor on this Shell Head, as well. His shoulder armor moves up and down to allow for arm movement, but looks great no matter where it is positioned. And the little discs on his hips actually swivel up and down to let his legs move. It’s pretty brilliant.
I’m a bit torn on the hip articulation. It was genius to make the little discs on the side swivel so that they could look right and not interfere with posing, but his leg movement is still a bit limited. But the figure looks great. Larger openings for the legs really would have detracted from the look, and one of this particular Iron Man’s main draws is that smooth, streamlined look. 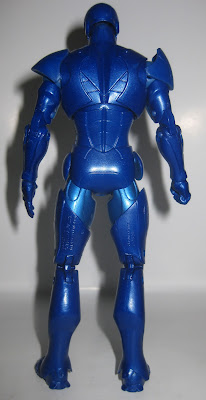 Design: The deco on this guy is very basic but very nice. The combination of darker and lighter blues adds to the figure’s already sleek design, and the slightly metallic finish is awesome. The red highlights of the eyes, chest, and palms are very striking in comparison. Honestly, this figure only interested me because it was a variant, but now I’m quite fond of it. 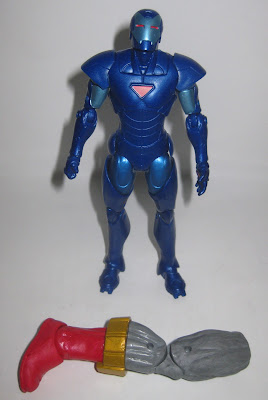 Accessories: Stealthy Stark comes with Terrax’s right leg and part of a six-part story about the guy.
The leg is a leg. I can’t get too excited about dude legs.
I do find it interesting, however, that Hasbro is putting out a line of figures that are mostly new tools, include build-a-figure pieces, and retail for around fifteen bucks. Seems I heard from some other company that logistics just wouldn’t allow for such a thing.
I’m also pretty sure that other company’s new line is retailing for around seventeen bucks with no accessories. 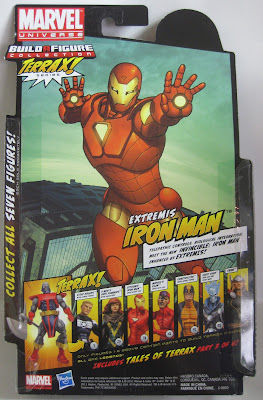 Packaging: Honestly, I’m not a huge fan of the new packaging. The art looks a bit simple and generic. Granted, that might have been a good way to go to preserve the uniformity of the line, but maybe you want to use something a little snazzier. But the graphics on the package are very eye-catching and the size and colors do stand out at retail. 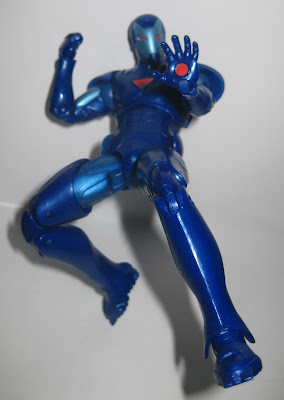 Overall: Okay, I’m good with the leg movement. I’ve got plenty of Iron Mans that can assume all sorts of wacky positions, but none of which look quite as sleek and just cool as this one. Hasbro made the right calls on aesthetics versus posability. There’s not a single thing I would change about this figure.
5 out of 5
Yeah – that good. What was initially a figure I was going to pass on has ended up being a favorite due to engineering. Hasbro really killed it with this Iron Man. I highly recommend you pick up either this one or the regular version if (when) you see them. I might even pick up a standard red and gold just because I like this one so much. Well done, guys. 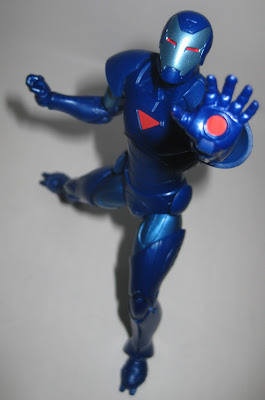