Days of the Dead Atlanta Part 1 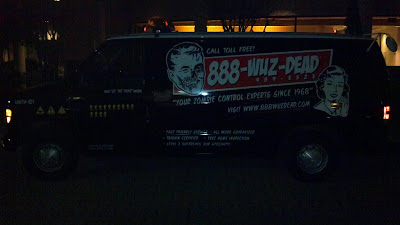 Hello, everybody and welcome to my recap of From Dusk Till Con’s Days of the Dead II horror convention!
As was previously noted, I was extremely excited about Georgia’s first-ever horror convention. I used 36 hours of vacation time to be there just to be sure I didn’t miss out on what might or might not be an awesome event. I booked a hotel room for three nights. I was serious about experiencing this thing to the fullest. And I’m pretty sure I did.
The con was held in the Wyndham Hotel and Convention Center in Peachtree City. I had never been to Peachtree City before this past weekend. It is jam-packed with very rich people. The part of town I work in is pretty affluent. On my drive into work I see very large houses. Houses that make me wonder what the owners must do to be able to afford such large domiciles. And how large their families are. It seems like you would need ten people to make one of these houses reasonable to occupy. There are sidewalks everywhere, the lawns and roads are all landscaped and maintained. Barely a day goes by that there isn’t some sort of crew blowing off the roads or pruning the trees and bushes. People are out walking around for health and pleasure; not because they have to. And they’re well-dressed. All fit and pretty. Smiling at each other. 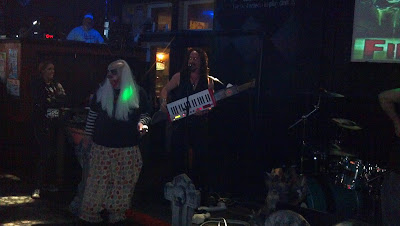 A little while after we got our food Ari Lehman’s metal band – First Jason – started playing. Well, let me correct that. Local personality Circus Envy introduced First Jason and they made terrible jokes for what seemed like a very long time. When I say “terrible” I don’t mean unfunny. It was just kind of self-aware, bad shtick. Eventually First Jason started playing and it was like this:
That’s Lehman on the keytar, who comprises a full half of First Jason; the other half being the drummer. It was an experience that I’m glad we saw. I wish I had more to say about First Jason, and you’d think I would about a metal band consisting entirely of one drum kit and one keytar, but Ari Lehman was very nice the whole weekend.
After First Jason’s set was over there was karaoke hosted by Circus Envy. I’ve been jonesing to do some karaoke for a while now, but Jekyll & Hyde’s was not the place, especially after this happened: 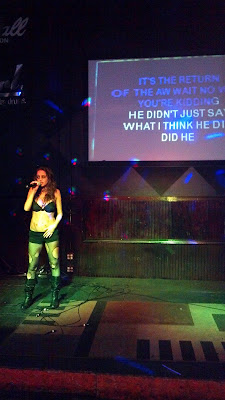 This is a Jekyll & Hyde’s zombie waitress performing the Slim Shady song by Eminem. There are so many things wrong with this scenario before you even get to the fact that it was the single worst karaoke performance I have ever seen in my life. First of all I absolutely loathe Eminem. Second, a young girl attempting to match Eminem’s undeniably fast and smooth flow is one of those things that is embarrassing to watch to the point where your butthole puckers up a little bit. Third, rap is not a very good format for karaoke. It just isn’t.
Once that awful thing started happening we decided it was about time to go. I went outside and called a cab, trying to make it clear that we were leaving early and the people that had actually paid for the round trip were staying. It did not surprise me to learn that we were the only group from the hotel. They said they were sending a cab.
We went outside and saw this: 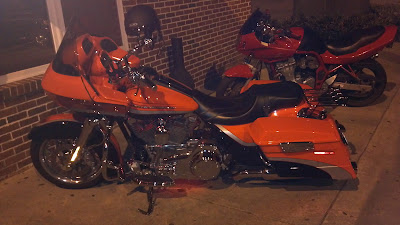 And then waited a very long time for a cab. Mrs. Troublemaker went back in to find our friends and tell them we were leaving, something that had not occurred to me to do because I am a self-centered jerk. Naturally, right around the time I decided I was going to go and pee beside the bar the cab pulled up.
It wasn’t our cab. But the driver said he’s take us, he just had to drop off the other guy first. Cool. We just wanted to be on our way. The other guy eventually came out and he was pretty cool and very drunk. It turned out he was a soccer player and – living in Peachtree City – the sort of person who could use the phrase “My other house”. He was very curious about the convention, but I don’t think we quite convinced him that he should come hang out and buy us lots of alcohol.
After we dropped him off at his modest dwelling – a two-story house with a three-car garage set back behind what appeared to be a carefully sculpted jungle scene from Avatar – our driver took us back to the hotel, telling us how much the other cab company ripped people off and how slack they were. Once we arrived our fare was a paltry twelve bucks.
Then we went back to our room and what we did there is none of your business.
Come on back tomorrow for my St. Patrick’s Day special, and then please check in Monday for “Days of the Dead Atlanta Part 2: The Big, Red Eyes of Otis Driftwood”!
-Phantom
Posted by Phantom Troublemaker at 11:00:00 AM

Email ThisBlogThis!Share to TwitterShare to FacebookShare to Pinterest
Labels: conventions, Days of the Dead, horror, life the universe and everything