Years ago there used to be toys stores all over the place.
I’m not talking about Toys R Us, here. I’m talking about places devoted to and profiting from the hobby of toy collecting. Places started - as with any other business – to capitalize on something, but some also started because the proprietor had a certain love for toys. These were places where you could go and find not only the latest mass market offerings, but also toys from Previews, exclusives from specific retailers that you might not have access to, and toys imported from foreign lands.

These were the days before everybody on the planet had internet access in their homes, let alone in the palm of their hand. It was a time where if you wanted to find a certain toy you had to go talk to the right person. You couldn’t just get online and pull up one of a thousand toy sellers. Even eBay wasn’t the resource then that it is now (and even now I’d rather deal with somebody face to face if I can). You had to make a connection somewhere. You had to get in your car and make a trip; though not too much of a trip. Like I said – these places were common.

In the mid-to-late 90’s there were always around four or five stores that might have carried some comics but were at least 80% toys. Heck, the dirt mall over off of Pleasant Hill road had three toy stores at one point. And they each had their own specialties. One was really good for import toys, one was great for comic-related and Star Wars stuff. The third tended to have hard-to-find items from then-current retail lines at reasonable prices.
There was one store that was a little further out of my range than the others, but was always worth the extra drive time. The place was huge and it had everything. There were large, well-defined sections – McFarlane toys, Japanese toys, models, GI Joe, vintage toys, a whole room devoted to Star Wars. You could literally spend a whole day looking around the place and not see everything. And not only was there an amazing assortment and selection of goods, the atmosphere was fun as well. There were loose toys sitting around everywhere. Starships, superheroes, and spy planes hung from the ceiling. Movies would be playing on a TV up front and whoever was behind the counter was always friendly and chatty.
I can’t overstate how important the atmosphere in this place was. Back in the latter half of the nineties toys were a big business. Some people were selling them purely for profit and the environment in certain stores was just short of hostile to the knowledgeable collector. Some of those businesses counted on moms and ignorant speculators to make their money and did not like people who actually knew the trade coming in. And there were others who were just carrying toys and action figures because they felt like they had to. These people seemed to resent the whole concept of toy collecting.
But that one store had the friendliest atmosphere of any retailer I’ve ever known outside of MusiCDrome (someday I’ll have to do a whole write-up on the mom-and-pop music store I grew up in) and it was a pleasure to visit every single time.
It was called Billy’s Toys, and – as you might guess – was run by a fella named Billy.
Billy loves toys. Like many of us, his love started with a single action figure purchase. He’s told me before, but I can’t remember right now which one it was. But from there started a lifelong love of all things plastic and articulated. The first time I ever spoke to Billy he told me about how he loved the hunt (as do we all). He’d track down one specific item, open it up and have some fun with it, then sell it off. Eventually this habit turned into a business. Billy has been collecting and selling toys since the eighties, and as much as I feel like a pretty knowledgeable toy aficionado, Billy puts me to shame. Rare is the toy he cannot identify or at least tell you what line it came from. He is a soft-spoken but enthusiastic man who can talk about toys until the cows come home but will never put you to sleep. And he doesn’t come off like a know-it-all, either. The guy just loves sharing an appreciation of the hobby.
Billy’s Toys has been in several different locations over the years and I can’t remember which order they were in. But there was a time when I would hit Billy’s every payday and blow a decent little chunk of my earnings. Then toy collecting kind of slowed down, I limited myself to a certain extent, and Billy’s moved just far enough out of my range that my trips got less frequent and eventually stopped. I think that’s when it was located in the Pendergrass Flea Market.
Then, a couple of months ago at a Pig-Dogs show I got to talking to Eddie Cadaver of the Casket Creatures. He collects toys and had read Needless Things(!) and we got to talking about the hobby. He told me his roommate’s dad ran a toy shop, the best one he’d seen. Naturally I mentioned that the best one I’d ever seen was a place called Billy’s and he said, “Yeah – that’s the one!”
Cadaver told me Billy’s was now out in Flowery Branch and was as good as ever. It was still a bit out of my way, but I decided as soon as time allowed I’d have to pack up the family and head out there. The thought of taking Lil’ Troublemaker to the best toy store ever was an appealing one. Obviously being a four-year-old he has a vested interest in toys, but being my son that interest is multiplied. He probably knows more about toys than the guys that were running those stores back in the nineties.
I found Billy’s on Facebook (go check it out), got the address, and last Saturday paid a visit.
As we approached the front door, Lil’ Troublemaker was immediately impressed by the presence of Frankenstein’s monster and Wolverine in the front window. But once we got inside, his mind was blown. 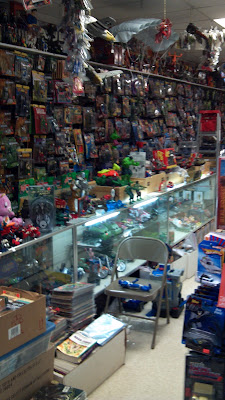 Billy’s new setup is almost as impressive as that first store, if a bit more compressed. There are still loose toys everywhere. Boxes of wrestlers, superheroes, vehicles, and martial arts-oriented reptiles are lined up along the aisles and under the counters. Glass display cabinets house everything from loose Star Wars figures to carded Visionaries to assembled LEGO kits. 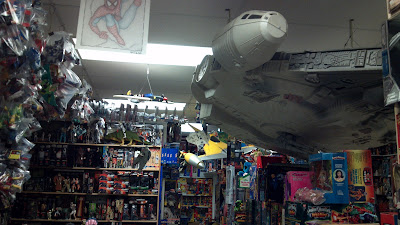 Behind the counters are row upon row of pegged figures just waiting to be perused. DC Universe, Marvel Legends, GI Joe, McFarlane, and countless other brands are hanging up. There are shelves above those pegs where boxed items are stacked. Old vehicles and larger-scale figures sit alongside opened Godzillas and tanks. Jawas are everywhere. A huge Millennium Falcon from an old Toys R Us display hangs from the ceiling in the middle of the store, festooned with Star Wars figures of all scales. An equally huge N-1 Starfighter is directly behind it. Every inch of Billy’s Toys is covered with… well, toys. 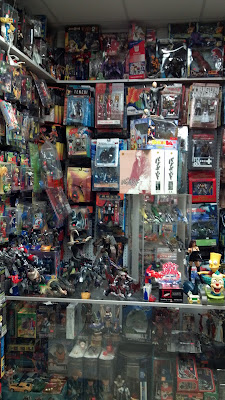 It is quite literally a museum and a retail shop all in one. I have often been told I could charge admission to people coming into the Man Room, but Billy really could be. Just as it was back in the day, you could literally spend the day in Billy’s and not see everything. 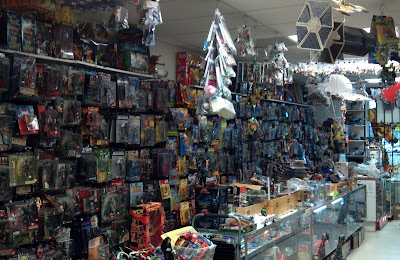 I’m telling you, guys – just the thought of a visit to Billy’s should be making you itch right now. If you are any kind of toy collector at all, you should be salivating. Places like this just are not around anymore. Billy’s is as close as you’re ever going to get to the fantastical toy stores you see in movies, where the proprietor is a kindly fella who loves the business and every kind of toy you can imagine is just there for sale. 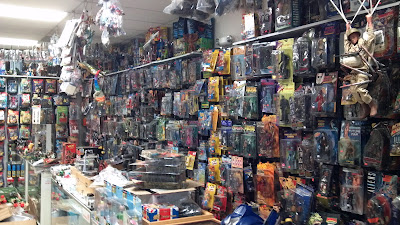 When we walked in I was glad to see Billy behind the counter, just as upbeat and friendly as ever. I told him I used to come in all the time and we started talking toys instantly. He actually recognized Mrs. Troublemaker from her time at the comic shop and they talked about the good old days. He was super nice to Lil’ Troublemaker as well, testing his knowledge of the Star Wars characters we were buying. 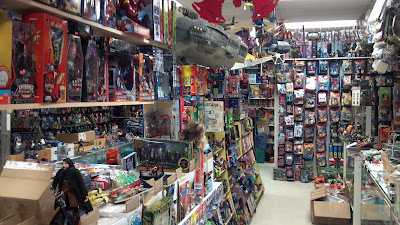 And that brings me to the goodies. If you are a toy collector, you are going to buy something from Billy. There is a little bit of everything there and a lot of most things. The minute we got in I spied some Doctor Who keychains behind the counter and knew I’d be buying one. I also left with a carded He-Man from the 2002 line (I had never bought one) and a Hasbro Gillman. Mrs. Troublemaker got a horrifyingly ugly Kindergoth doll and our son hauled off a bunch of Star Wars figures. What’s funny is he went in there with a list of what he wanted and mostly stuck to it. He needed Hoth Luke, Luke and Leia in their Endor gear, one or more Ewoks, and the ghost of Obi-Wan (possibly with Anakin and Yoda, but mainly Obi-Wan). Don’t’ ask me how or why those figures were on his “must-have” list, but they were. And he got them all. He also needed a villain for the Ninja Turtles figures I gave him to fight (yeah – I really am working on that Ninja Turtles scheme I mentioned) and got a Foot Soldier. We got a couple other things and all in all had a great trip. 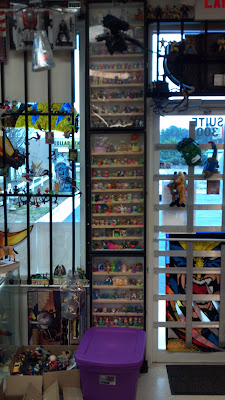 I’m not sure how long we spent in there talking to Billy and perusing his wares, but it was a great time. And not long enough to take it all in. We’ll be back soon enough. 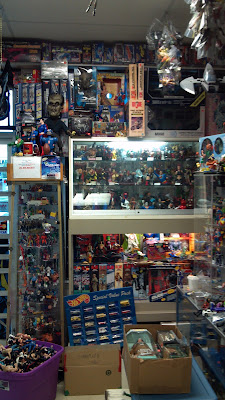 So there it is. I know a lot of my readers aren’t actually in Georgia (surprisingly), but if you ever are, you have to figure out a way to make it to Billy’s. Places like that just aren’t around anymore. And if you are in Georgia, go pay Billy a visit when you can. But bring some money, because I guarantee you’ll find something you have to have.
And also, bring a “wants” list. Because Billy still loves the hunt. 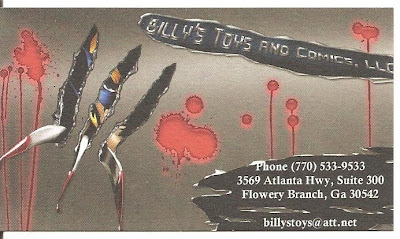