Thundercats has never been one of my top 80’s picks. I certainly watched every episode of the show I could when I was a kid, but I never had many of the toys – I think only Panthro and Mumm-Ra – and the cat people from Thundera were nowhere near as dear to me as the Joes, Star Wars, or even the warring factions from Cybertron.

But much like Masters of the Universe (also not a childhood favorite, though I am quite well-versed), Thundercats has a powerful nostalgic hold on me. So when I saw the Classics figures at last year’s Toy Fair I was pretty stoked.

Stoked until I found out they were in a stupid 8-inch scale that didn’t match anything I own.

And then those 8-inch Classics figures came out and warmed the fuck out of some pegs and Bandai – in what might be a first for a toy company – realized their mistake and fixed it. They relaunched the line as a much more reasonable 6-inch scale figures. That still have shitty joint pegs.

But let’s take a look at the leader of the Thundercats and see if he can overcome his rather embarrassing flaws. 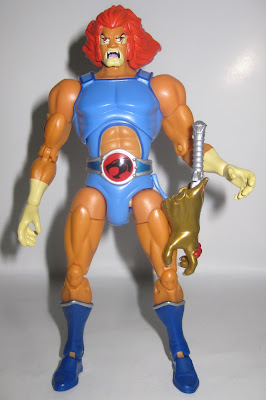 First Glance: It looks like just his ankles are stupid. Seriously, you guys – that’s all I can focus on. 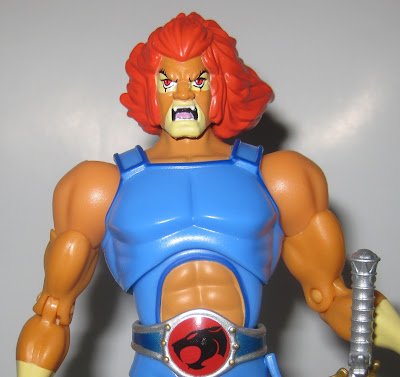 Sculpt: Aside from the size, I think the only difference in this release and the larger one is the head (but I’m not sure – as I said, I didn’t buy that one). The big one had a regular head and this one has a crazy scream-o head. As a toy collector, I almost always prefer my figures to be designed in a neutral state. I don’t like battle damage or extreme facial expressions unless they’re really well thought out and appropriate. And while I would prefer a regular Lion-O head, this one does look good.

The articulation on this figure is amazing, which seems to be one of the trademarks of Bandai. Lion-O has ball joints at the neck, shoulders, wrists, and hips. The shoulders have that odd extra piece that Marvel Legends had – the inset part that sometimes allows for a greater range of motion and sometimes seems to just sort of be there. The ankles have rocker joints. He has swivels at the top of the biceps and the top of the thigh. The knees are double-jointed. The elbows are standard pivots. There are also rocker joints at the waist and upper torso. There aren’t many poses that this figure won’t be able to pull off.

The actual sculpt of the figure is very good. The clothes and detailing is all sculpt; none of the trim is just painted on. Mine had tight joints and no trouble holding poses, but the plastic used and the general smoothness of the figure make him seem much more manufactured and artificial than other lines I collect.

The screws visible in Lion-O's back are, of course, a terrible eyesore. That's really all I have to say about them. Blech. 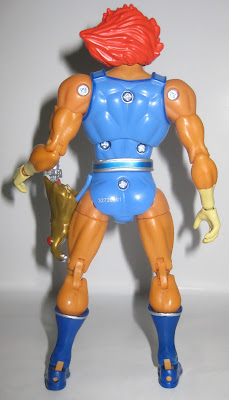 Design: He’s pretty shiny, which lends to that artificiality I mentioned. Lion-O’s paint apps are very competently applied though. Mine doesn’t have anything even close to an error. From the excellent detailing of the face to the belt to the trim on his boots, everything is impressive from a quality standpoint. I don’t necessarily agree with the plastic-y look, but the figure does look like it was meant to look. It’s an issue with design, not execution.
The ankles are, indeed, the only place where the joints are different. He has orange pegs going right through his blue boots. It’s terrible. 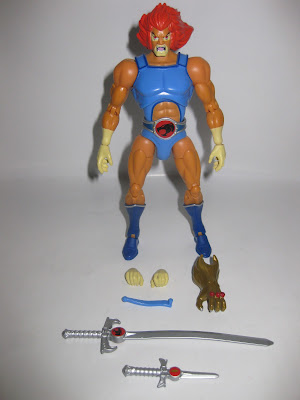 The hands and Claw Shield work very well. They attach by popping onto the balls at the end of Lion-O’s wrists. The tether plugs into his belt on one end and has a ball on the other. When the Claw Shield is attached to Lion-O’s waist it sticks out really far, but it still looks okay. I like the way they designed it. The small Sword of Omens fits into a slot in the Claw Shield.

Both swords look good. The large one has a nice open Eye of Thundera, while the small one’s is closed. I feel that the material these were made of is too soft, as my larger sword is warped. 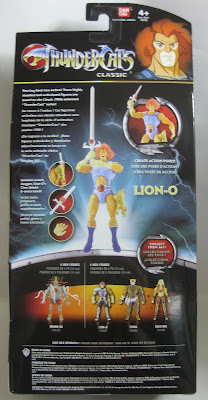 Packaging: Sort of a hanging window box. It looks good and was easy to open, so I loved it. 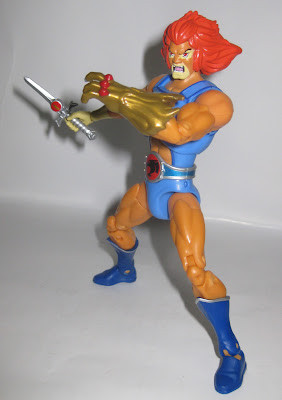 Overall: Easily worth fifteen bucks. This is not only a nice-looking figure, it’s a great toy. Very sturdy and poseable. I’m not crazy about the shine and I absolutely detest the ankles and back screws. I could say, “But kids won’t care,” but that would be a lie. I cared a lot about such things when I was a kid. I was just as picky about my toys then as I am now. 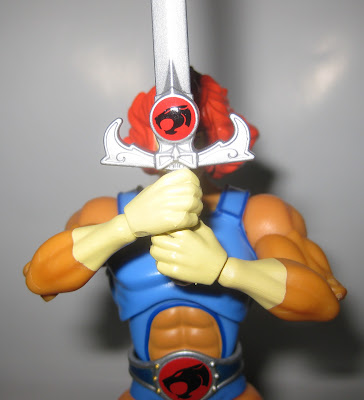 But this is a really damn good toy. They’re pretty much all over the place now – go get one. I know I’m going to end up with all of them if Bandai continues the Classics line and can show at least a little restraint with the peg coloring. 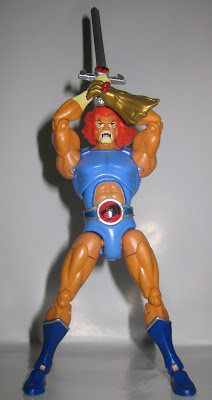