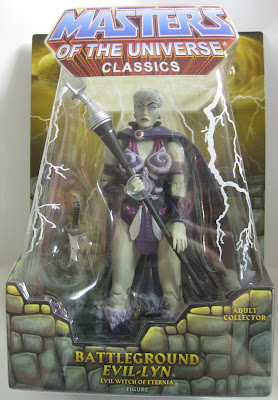 I was never a fan of the weird, jaundiced appearance of the original Evil-Lyn.

Apparently Filmation wasn’t, either, because she had Caucasian skin in the 80’s cartoon, as well as in the 2002 revival. So pretty much nobody likes yellow Evil-Lyn. Not only is the yellow not very appealing, the fact that she is nothing more than a repaint of Teela is also kind of lame. Granted, this figure is still nothing more than a repaint of Teela, but at least she’s not yellow.

Evil-Lyn was always pretty cool. In the old 80’s cartoon she was the only one of Skeletor’s minions that didn’t put up with his shit. In the 00 series she was actively subversive. Quite frankly I’m not sure if her characterization as an untrustworthy, manipulative being with her own goals and schemes is empowering feminism or misogyny, but it’s interesting anyway.

A key difference in the two primary iterations of Evelyn Powers (yes – that’s her real name) is that we saw the hair of the later one. And if you know cartoons depicting licensed characters, that’s a pretty big deal. If somebody has a hat on, they always have a hat on. I really dug that short-cropped, white hair the first time I saw it and thought it gave her a whole lot of character.

This, however, is not the 2002 Evil-Lyn. It is a vintage Evil-Lyn painted in her colors that comes with her head. Let’s see how that worked out. 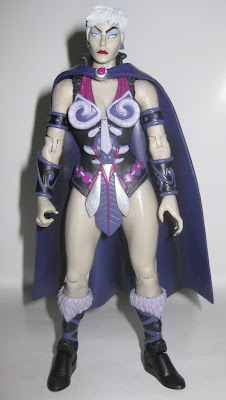 First Glance: Once again this line proves just how significant a paint job can be. Battleground Evil-Lyn does look very different and cool. 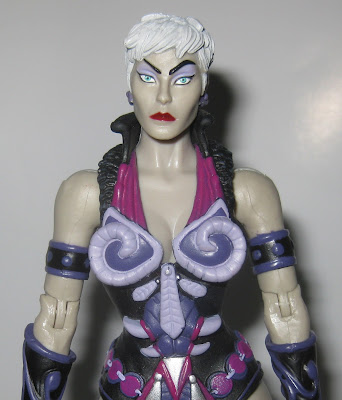 Sculpt: Battleground Evil-Lyn is essentially the same figure as Teela and Evil-Lyn. As such, she has the basic MOTUC female articulation. The arms and legs both have a deeper range of motion than you might imagine, as the legs can be crossed and the arms can be positioned quite close together. All of the joints on mine are tight and none are stuck. She has no trouble standing thanks to the ingenious MOTUC rocker ankles.

BG Evil-Lyn does have a major difference in that she has Catra’s left hand. On Catra it looks like it is preparing to claw at somebody, but on Evil-Lyn it works nicely as a spellcasting hand. I will say, though, that it might have been nice if this had been an alternate, swappable hand. But it does look good and functions just fine for holding the upper portion of Evil-Lyn’s staff.

The standard head is the same as the original Evil-Lyn and looks suitably harsh and sinister. The alternate un-hatted head features the same face under the 2002 hairstyle. It looks great and the Horsemen did a good job of not making the hair look too animated. 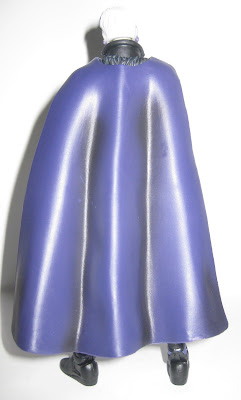 Design: Battleground Evil-Lyn is painted in an entirely different – and much more appealing – color scheme. Her flesh tone is a pale, greyish Caucasian with some very faint highlights for depth.

The new color scheme on her clothing is purple-based, so of course I love it. The highlights and details are tight. I don’t have any blemishes or smears on mine.

The 2002 head is very nice. The makeup is identical to the regular head, and the hair looks good. Not much you can do with white hair. Well, I suppose they could have fucked it up like they do with a lot of lighter colors, but they didn’t. 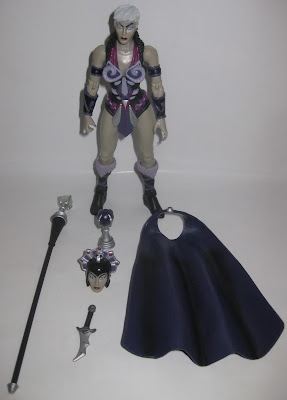 Accessories: This Evil-Lyn come with her staff, two different orbs, the extra head, and the cape; which is a big deal to me. It makes a big difference in the looks of the figures.
The cape is pretty basic, but has a detailed clasp and a nice wash.

The staff is even more basic, but the orbs vary quite a bit. One is purple, which would normally be my variation of choice, but Matty went and made the other one glow-in-the-dark. I cannot resist glow-in-the-dark. It may not look as aesthetically acceptable standing on the shelf, but it glows in the dark. 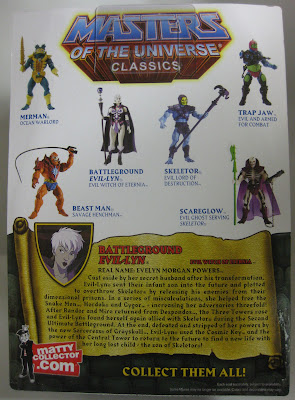 Packaging: Like with Demo Man, this packaging is supposedly thinner. I can’t tell and I don’t care. Matty could start shipping these in plastic bags as far as I’m concerned. Don’t get me wrong – I think the packaging is neat and all, but I open all of these. Well, all of the ones I actually want. I have a stack of unopened figures, but they’re still in the mailer boxes anyway. 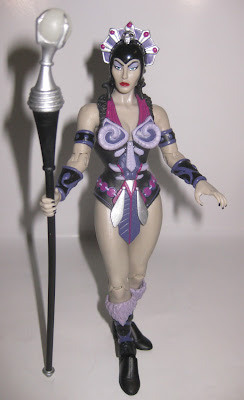 Overall: I really hope that we get an entirely new, 2002-style Evil-Lyn someday soon. But until then, this one is an acceptable stand-in. She has definitely replaced the yellow Evil-Lyn in my bad guy lineup. When you see the score, keep in mind that I am rating her as a repaint/variant, not as an actual representation of the 2002 Evil-Lyn.

Seriously, they did a really nice job on her. I can’t find a thing to complain about here. BigBad has her. Probably eBay as well. 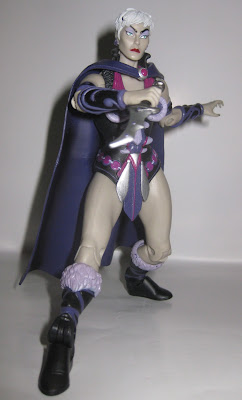