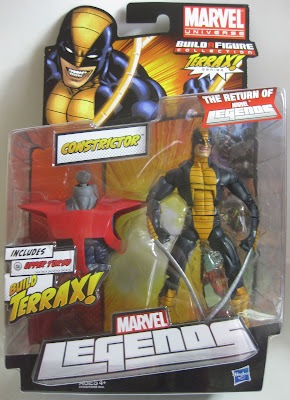 Holy potatoes, Marvel Legends are back!

Evil and I have spent the last month looking high and low for any sign of these elusive new toys. At one point there was a rumor that Walmart would be selling the figures for $11.99. Later on I saw a peg at Toys R Us priced at $17.99. That’s a ridiculous fucking difference in price for 6” scale figures, but that’s Toys R Us for you. Either way, we still weren’t seeing any actual product.

I was mainly looking for Hope and Constrictor. The other figures in the first series – Steve Rogers, Extremis Iron Man, Klaw, Thor, and Ghost Rider were not of much interest to me. I already have the SDCC Thor and I have no idea what that crazy-ass Ghost Rider is from. He looks awesome, but I’ve already got a great Johnny Blaze Ghost Rider that I love. I might pick up that Steve Rogers if I see him for a reasonable price.

But I was willing to pay the TRU premium for Hope and Constrictor. They were the must-haves and I’ve paid bigger markups for lesser characters.

We were out driving around the other day and I decided to call the nearest Toys R Us to see if they had gotten the new Marvel Legends in yet. Their reset had been done for a couple of weeks, the priced pegs were already out, and I knew it was a truck day. So I called and asked and the lady said they had not gotten them in. Naturally I didn’t take her word for it. After we ate lunch we went over to the Toys R Us and sure enough – there was a whole case out for sale. I grabbed what I wanted and called Evil to see if he wanted any. He showed restraint and said he’d wait for cheaper ones.

When I got to the register I actually decided to have this conversation:

Me – “It’s probably not worth mentioning, but I called here a little while ago and the person I spoke to told me you guys didn’t have these in stock.”

Me (making a show of inspecting the huge words “MARVEL LEGENDS” across the top of the package) – “Huh.”

Me – “It would have been fine to just say you didn’t know what I was talking about. Better that than telling me you didn’t have something that was in stock. But it’s cool. I’ve got ‘em.”

Normally I wouldn’t have been bothered to even say anything, much less continue the conversation once it turned out I speaking to the actual person, but I’ve been all full of beans lately.

As far as Constrictor goes, I can’t remember for the life of me why I like him so much. I think maybe he showed up in one of Sam Keith’s Marvel Comics Presents stories? I’m not sure. But apparently I’ve liked him for a while, because I drew him years ago: 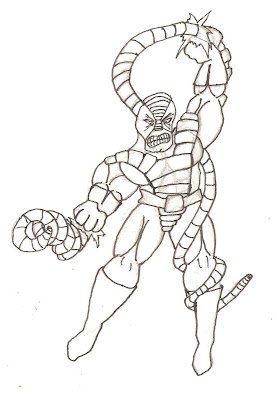 Okay, first of all this is obviously a terrible drawing. I don't know how old I was, but I wish somebody had told me to stop drawing and never do it again.

Second, I drew him with a belt. Not only is this inaccurate; but it will become extremely hilarious over the course of this review. I did not remember the belt when I was writing this.

Why is he wrapping his tendril around his own leg? Why is the other one some kind of spring? Teenage me was a moron.

Whatever the case, he’s purple and has cool tendril-things. So I wanted him. 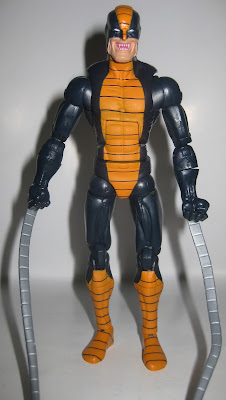 First Glance: He looks good. Why does he have a belt buckle? (see?) 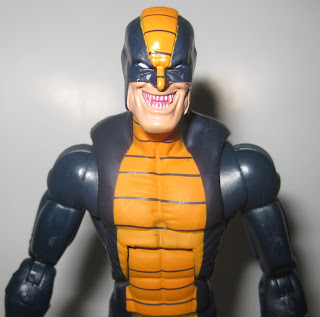 Sculpt: I do believe Hasbro has found their generic, DCUC-esque buck. And that’s not such a bad thing, really. If they’re going to keep this line going they’re not going to be able to just keep cranking out six or seven unique sculpts every few months.

Constrictor has ball joints at the neck, shoulders, and hips. There are also hinges at his shoulders that work very well and blend fairly smoothly into the torso. There are swivels at the tops of the biceps, the tops of the thighs, the wrists, the waist, the calves, and the ankles. The ankles also have pivots and there is a notched pivot at the upper torso (I don’t know the term for when it does that clicky thing that holds it in place). All of my figure’s joints are tight and functional and he’s pretty good at standing, even with his coils.

The head sculpt is pretty awesome, as it’s an upper face mask with lots of expression and an open mouth. Very distinctive. The only thing I don’t like is that if you look closely it kind of looks like he has fangs, and I don’t think Constrictor has fangs.

I’m also not crazy about his belt buckle. Constrictor definitely doesn’t have a belt buckle. This is so weird and off-putting I almost wonder if it wasn’t a production error. I don’t know why this bothers me so much. (HAHAHA! I am a moron.)

Also, I’m a little disappointed that his coils are not removable. Or poseable, for that matter. They look really good, but there just isn’t a whole heck of a lot you can do with them. This is, of course, preferable to them being bendy and made out of foam. Ahem.

Finally, his wrists don’t quite match up with his forearms, sculpt-wise. 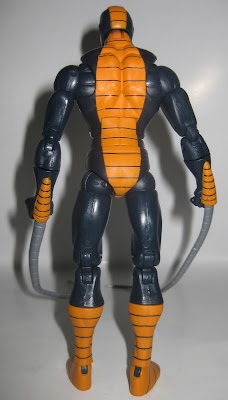 Design: Constrictor has a fairly simple design and Hasbro has pulled it off well. The purple is easy enough, but the yellow on top looks very good and strong. The black trim on the yellow is also tight and accurate. The details on the face are solid and the eyes and teeth are where they should be. No complaints there. The coils are unpainted silver and really don’t need to be more. I do wish they’d gone the route of Omega Red’s coils if they were going to be permanently attached, though.

His ankle joints are a different color plastic from the surrounding area and this is just plain stupid. 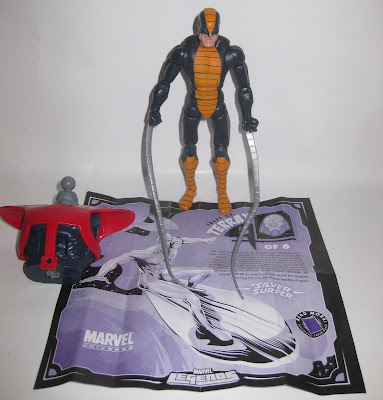 Accessories: Constrictor comes with Terrax’s upper torso and a portion of a short narrative meant to get people to care about Terrax.

The torso looks pretty good. I’d let you know how Terrax turns out, but I’m not buying this whole series. The one sheet Terrax story is fine. Whatever. 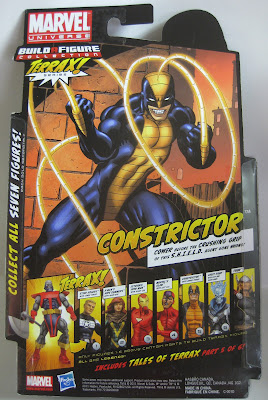 Packaging: Honestly, I’m not a huge fan of the new packaging. The art looks a bit simple and generic. Granted, that might have been a good way to go to preserve the uniformity of the line, but maybe you want to use something a little snazzier. But the graphics on the package are very eye-catching and the size and colors do stand out at retail. I actually found a few of these guys at Walmart this morning and they stood out despite being on a shelf rather than pegs. Among the ones there were the Iron Man and Ghost Rider variants and I’m kind of wishing I had bought them. At least the Ghost Rider. Dammit. He looked really cool. Also, I’d really like to know how much they were, as there was no price sticker. Maybe they’ll still be there on my way home. Probably not.

Note: Holy crap, they were still there fourteen hours later. I went ahead and got both. They were $15.44 each, which makes them pricier than I wanted them to be but also means Toys R Us didn’t rip me off quite as badly as I thought. Also, I am now only two figures away from building Terrax and since I kind of want that Steve Rogers anyway I suppose I might as well go ahead and buy Klaw. I don’t even know who he is, but he looks just stupid enough for me to enjoy. Thor does not come with a piece of Terrax, so he isn’t an issue. 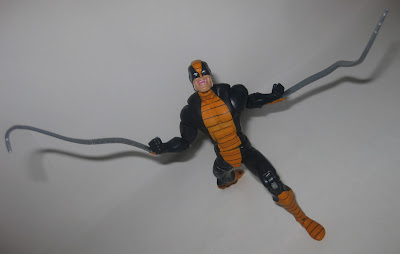 Overall: He’s not perfect, but I’m pretty happy with this guy. The only things I perceive as actual flaws are the belt buckle, the ankles, and the wrists not quite matching. The other things I mentioned are actual design choices. If it came down to a choice between Constrictor having removable coils and not getting Constrictor at all, I’m glad we got Constrictor.
3 out of 5

These are showing up now at Toys R Us and Walmart. Keep an eye out. If you absolutely have to have this guy, I’m sure BigBad or any number of other online retailers will be willing to charge you even more than TRU.