Did I even have a choice other than to buy Mumm-Ra along with Lion-O?
Even though the Mumm-Ra in the new cartoon is way cooler than the 80’s Mumm-Ra, this figure is vastly superior to its modern counterpart. That’s because for some reason Bandai decided to give the modern Mumm-Ra a tiny, little pinhead. It’s insane. I can’t imagine what the logic was behind that decision, but he looks absolutely silly.
This Classic Mumm-Ra, on the other hand, looks badass. He doesn’t even have the stupid mismatched pegs that his leonine nemesis does.

I’ve always really liked Mumm-Ra as a villain. His whole deal of being a weak, decrepit, little evil guy that turns into a huge badass monster once his minions have screwed up badly enough is great. He’s like this lazy tyrant that really doesn’t want to do any work. Also, he has a dog that he willingly named “Ma-Mutt”. Anybody that names their demonic bulldog Ma-Mutt can’t be that bad. 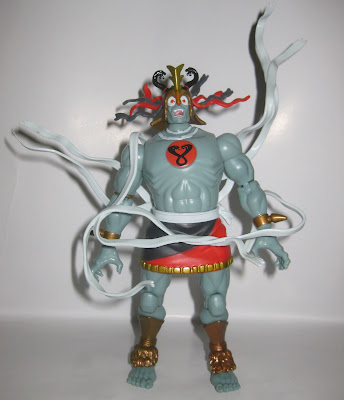 First Glance: He’s big and even more so than Lion-O looks just like the cartoon version. Seems a bit light on accessories, though. 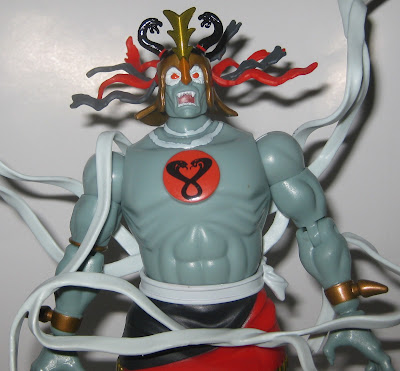 Sculpt: This is definitely Mumm-Ra, and a very good one. Judging solely by what I’ve seen in stores this might be the crown jewel of Bandai’s Thundercats line.
Just like Lion-O, Bandai has done the one thing they really excel at and given Mumm-Ra great articulation. He has ball joints at the neck, shoulders, wrists, and hips. The ankles have rocker joints. He has swivels at the top of the biceps, the top of the thigh, and the tops of his calf armor. The elbows and knees are standard pivots. There is a rocker joint at the waist. Mumm-Ra’s articulation isn’t quite as extensive as Lion-O’s, but it’s still about as much as you need. What impresses me is Bandai’s willingness to alter their designs across the line in favor of aesthetics and practicality.
Mumm-Ra’s sculpt is absolutely wonderful. He’s big and bulky and looks exactly like the cartoon character. The face is fierce and demonic. The headpiece looks great and features the dual serpents and bandages of the original. I’m not crazy about the bandages on the helmet being removable because they sort of just fall out all the time, but a dab of glue will fix that easily enough. As simplistic as Bandai’s toys appear, there is an awful lot of fine detail to be found. The crest on Mumm-Ra’s chest looks very good, as do his wrist and ankle pieces. His skirt is made from a soft plastic or rubber and does little to hamper his movement.
All of the joints on my figure are tight and easily moved.
This figure does not have any mismatched joint pegs, but I think it is more from happenstance than planning. Either way, Mumm-Ra is much more visually pleasing than Lion-O. He does have the same unsightly screws in his back, but some of those holes are actually utilized for the bandage accessories. 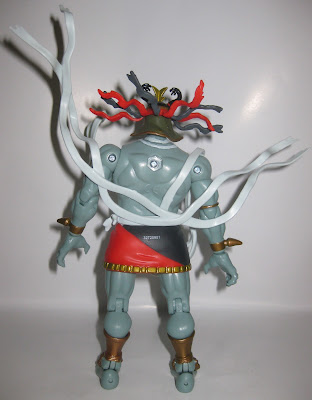 Design: Mumm-Ra isn’t quite as shiny as Lion-O, but still has a plastic-y sort of sheen to him.
The paint is very solid and accurate. There are no flaws or scrapes, even on the skirt portion. I tend to find more paint flaws on soft plastic pieces than anything else. 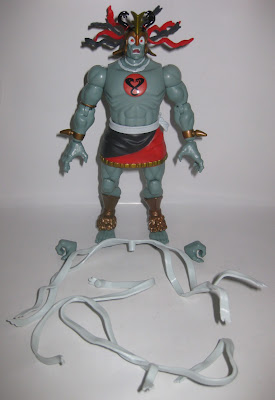 Accessories: Mumm-Ra comes with a couple of bandages that plug into his back and just sort of hover around him. They look great and provide a very cool effect, but they are molded out of a soft plastic and I have to wonder if they will start to droop after a while.
He also comes with an alternate pair of hands, but nothing for those hands to hold. I’m a little disappointed we didn’t get the big, black scimitar that the old Mumm-Ra came with. Of course, I’m a lot more disappointed we didn’t get Ma-Mutt. But I understand. Mumm-Ra is a very large figure – one that Mattel would have charged $24.99 for – and I’m glad that Bandai went with size over accessories.

Packaging: Sort of a hanging window box. It looks good and was easy to open, so I loved it. 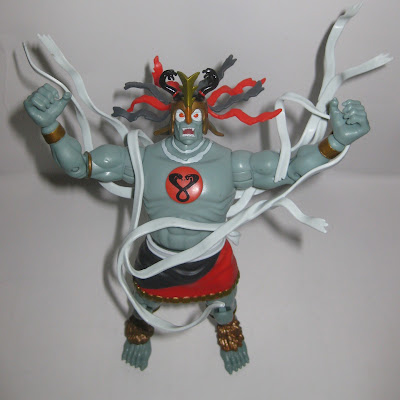 Overall: Mumm-Ra is a great figure aside from the visible screws. If you’re only going to buy one Classic Thundercats figure, this is the one. He looks evil and awesome.
4 out of 5
I don’t have much else to say here. It looks like Bandai’s Thundercats line might be pretty much done, so I can’t really get too hopeful for more releases. As much as the visible screws and ugly joints bother me, these are really good toys. I’d likely buy more if they were released. 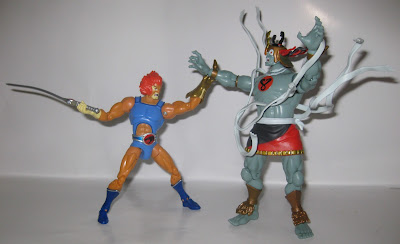