I’m not sure how to approach this one, but since I did a big ol’ post about Anthrax last Thursday I feel like I should do one about Crispin Glover today. We’re going to see some sort of performance of his at the Plaza Theater tonight and while I have no idea what to expect, I am very excited about it.

I’ve liked Crispin Glover ever since his wonderful and off-putting performance as George McFly in Back to the Future (just the first, not the sequels – the rat bastards that made it replaced him and, well, you can read about it here). Granted, I didn’t know who he was until years later, but something about Marty’s dad just fascinated me. He was so painfully awkward. His movements all seemed so spastic and yet carefully planned out. He spoke with intensity and shyness at the same time. The guy was a practice in contradictions. I didn’t understand any of that at the time. I just knew he was a weirdo.

Sometime later I would see the movie that truly burned the name Crispin Glover into my brain. The one that made me a lifelong fan of absolutely anything he was in.

Like most of you, I used to go to Blockbuster video and pick out random movies to rent. The only genre that I consistently rented was horror, but I’d occasionally dabble in crime, comedy, science fiction, and maybe even the odd foreign film now and then. Back then you’d shop purely by covers. I’m not saying you’d ignore the description on the back completely, but it was the cover that would get you to even bother with the blurb on the back in the first place.

VHS covers are a fascinating thing and an art form that will never be duplicated.

So much rode on that single picture or collage or painting. Nowadays the companies that produce the movies can rely on the internet to get their message across. Not to say that somebody, somewhere isn’t putting effort into the covers of DVDs and Blu-Rays; but there’s not as much at stake. Everybody is on the internet and knows everything they want to about movies. People pop on Netflix and see the description of the movie as instantly as they do any cover art. Plus, rental places aren’t around like they used to be. You may not even have a Blockbuster near you. And Red Box doesn’t count because nobody takes a leisurely browse around an overgrown Coke machine.

But back in the day, that box art had to sell the movie. There had to be something about it that made you curious, that piqued your interest or caught your eye. Whether it was a bright splash of color, a smutty shot of some cleavage or a barely-concealed ass, or a sinister robot with a chainsaw for a face; there had to be something that made you think, “Hey now, that movie might just be for me!”

This is the cover of Rubin & Ed:

I don’t know what the heck about that made me want to see the movie. It pretty much negates the point I was making above.

But I did see that Howard Hesseman and Crispin Glover were in it. So I guess that’s what sold me.

Rubin & Ed is weird and hilarious. It was one of the first non-horror indie movies I really liked. I don’t know what else I had seen at that point, but I felt then as I do now about most Sundance/IFC/Palm d’Or crap – it’s all a bunch of pretentious bullshit. I just can’t do art house. I’m not saying movies about gay cowboys eating pudding don’t have value, they just don’t have any value to me. And why the crap should I care about anything that doesn’t have value to me?

Glover’s performance in Rubin & Ed was an insane extrapolation of George McFly. Rubin was George taken to an extreme. I loved the performance more than the movie, but it wasn’t until years later that I remembered this:

Which happened in 1987 when Glover was promoting The River’s Edge. I was way into David Letterman in my pre-teen years. I don’t know why. But it was probably the second or third time I watched Rubin & Ed that I realized why that character had seemed vaguely familiar and remembered the insane breakdown on Late Night. I think when I saw it I didn’t even realize Glover (as Rubin) was there promoting a movie. Letterman had weirdos (spellcheck tells me “weirdoes” is the correct spelling, but I think that looks stupid) on all the time and it didn’t seem out of place at all to me that this long-haired guy in platform shoes was on just sort of talking. It was odd, however, that he chased Dave off the stage with a karate kick.

Glover has been in tons of movies since then, and is one of those actors that gives you a little thrill when they show up unexpectedly. It’s no surprise to see him in things like Wild At Heart, Dead Man, or What’s Eating Gilbert Grape?; but my favorite surprise Glover appearance has got to be his role as The Thin Man in McG’s Charlie’s Angels movies. 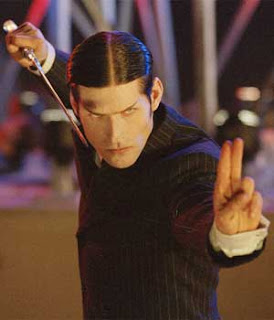 I’m not gonna lie – I am a big fan of those two flicks. They are both big, ridiculous popcorn action at it’s very best. They are unapologetic for their corniness and their sense of fun and the stars are totally fine with being sex objects and capable females at the same time. Glover’s appearance and character are the absolute antithesis of fun and sexy. He’s such a good foil for the bouncy, sassy chicks with his slow, calculated movements, dour demeanor, and total lack of dialogue. How awesome would it be to get a Thin Man movie? Or even a comic book tie-in?

Willard was the last movie I saw that starred Glover. It’s a remake of a 1971 film by the same name that I have never seen. But I knew it was about some dude with a rat fixation.
Once again Crispin Glover was mesmerizing in the movie. His portrayal of the socially awkward and eventually sociopathic Willard Stiles begins as heartbreaking and evolves into repugnant by the end of the movie. It’s great stuff, and that’s not even counting Glover’s bizarre cover of Michael Jackson’s “Ben”; the song about a rat that was done for the original movie:
I’m ashamed to admit that I have yet to see The Wizard of Gore. It’s a remake of the Herschell Gordon Lewis movie and it also features some of the Suicide Girls, which you’d think would be reasons enough for me to have checked out. I just haven’t. Sometimes I’m a bad nerd.

And finally, there’s tonight’s event. I don’t know what in the world we’re in for. The proper title for the showing is Crispin Hellion Glover's Big Slide Show Part 2: It Is Fine. Everything Is Fine! Tomorrow night is an older work of Glover’s – What Is It? – featuring actors with Down Syndrome. Me and Mrs. Troublemaker are going with Little Pond and The Grand Hoff and I don’t know if any of them know quite what we’re in for, either. Whatever it is, it’s bound to be weird.

Check back next week for the write-up or come on out to the Plaza Theater tonight. I don’t know if the show is sold out, but you can check here:

-Phantom
Posted by Phantom Troublemaker at 10:19:00 AM

Email ThisBlogThis!Share to TwitterShare to FacebookShare to Pinterest
Labels: Back to the Future, life the universe and everything