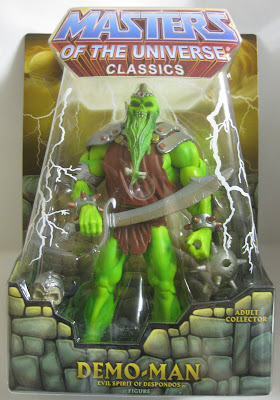 Okay, so I got all the vitriol in my system over the Demo Man delay out yesterday.

Well, I didn’t get it out. I shared it. It’s still firmly intact deep in my toy-collecting soul. But I feel better. Better enough that I can do an intro that is my usual brand of space-filling nonsense.

I have no idea who Demo Man is or why the heck he warrants a precious slot in Matty’s Masters of the Universe Classics Club Eternia, but there are things about this guy that excite me a bunch.
That’s more than enough reason for me to think a figure looks pretty awesome. I was totally stoked for this guy after Matty debuted him at San Diego Comic Con last year. The only thing that remained was to see if what they actually produced would be as great as what we saw. Which was this:

Pretty rad. But then a couple of months ago, Matty showed us this:

Well, crap. I can't find the carded picture that Matty released that got everybody so worked up. But he's a much brighter green, which you'll see in a minute anyway. And trust me - he's even brighter green in person.

Which, quite frankly, I thought was even more rad but a lot of people seemed to not like. I totally get that. This Demo Man is a very bright green sumbitch. There have not been a whole lot of bright colors in the Masters of the Universe Classics line thus far, and it was looking like Demo Man might end up being so bright he really wouldn’t fit in on your shelf very well. And that’s saying something for a line that includes a glow-in-the-dark skeleton man and a king whose color scheme is so ugly it makes your eyes bleed.

But now I’ve got Demo Man in hand, so let’s see how he turned out. 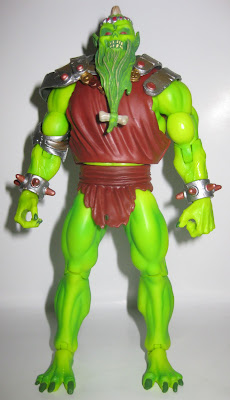 First Glance: Oh fucking hell, this guy is green. Mega-mega bright ultra green. 1988 Vaurnet polo shirt green. Fucking shit. But I like him. But I don’t like that I can see his belly. 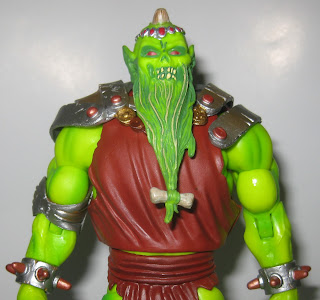 Sculpt: Demo Man features your standard MOTUC articulation, but looks like he has a few new parts. He doesn’t. The head(s) and the forearms are the only things that are new on the actual body. That’s how much difference a paint job can make on these guys.

There are a few new pieces of flair on this guy that I’m going to consider part of the figure rather than accessories, even though they are removable. Demo Man’s tunic, loin cloth, shoulder gear, and the spike thing on his right bicep are new pieces. The shoulder gear and arm spike are made from a very soft plastic that I would normally complain about, but it seems to work well in this case. The arm spike isn’t going to be doing a whole lot anyway, and the shoulder gear does need to be mobile and flexible for posing purposes. Also, because of the way the pieces are designed you aren’t really going to be able to tell if they are a bit misshapen anyway.

The loin cloth and tunic have a very nice tattered remnant look that fits the figure, but I don’t like the separation at the waist. I think I would have preferred it if the tunic and loin cloth were all one piece like She-Ra’s dress. I don’t have any trouble posing her and she doesn’t have that gap between parts. Granted, Demo Man can be posed in such a way that the gap is undetectable, but I just wish it wasn’t there because when it is visible it is very visible thanks to the contrast between his green skin and the dark tunic.

Demo Man’s heads are obviously a big selling point. His standard head is truly a work of art. Very reminiscent of the sort of thing you’d see on the cover of old pulp fantasy magazines. I can just picture that head floating huge in the background over a barbarian fighting a bunch of skeletons or something. The Skeletor head is the best Skeletor head ever because he looks completely creepy and nuts. I’m glad I had an extra Skeletor body to put it on. The skull head is a bit odd, as it really isn’t an entire head – more like a trophy. That’s why I stuck it on Demo Man’s shoulder on my shelf and in that picture yesterday.

In the MOTU story that I have in my head, the skull belonged to Demo Man’s greatest rival. After years of conflict, Demo Man finally defeated him. But then the villain found himself without purpose so he went and dug up his enemy’s skull and now wears it on his shoulder and talks to and argues with it all the time because Demo Man is batshit insane. It’s kind of like what Joker would do if he killed Batman. Demo Man is totally my MOTU world’s Joker.
Otherwise Demo Man really does look and function very well. All of the joints on mine are tight and none were stuck. He can hold both weapons well and the heads swap easily. 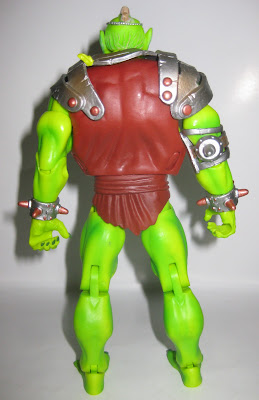 Design: So obviously I like the green. It really does make this guy stick out like a sore thumb… well, a green thumb; if you’ll allow me to mix metaphors, but it looks fantastic and unique. And if there’s one thing that figures from a line that shares as large a percentage of parts as MOTUC does, its uniqueness.

The skin is shaded very nicely, and just like all of the MOTUC releases it looks much nicer in person than it did on the site.

The detailing on the armor, the tunic, and the crown is awesome. Everything looks very worn and ancient, like this guy was dug up out of the ground. The spikes, studs, and jewels are tight and well-placed and the washes are some of the best in this line.

Each of the heads that come with Demo Man are solid. His standard head – which looked fairly dull in production pics – is indeed very simple, but the bright red that was used for the eyes and the off-putting color of his teeth looks so good behind the light green highlights. It’s very haunting and sinister. The skull is nicely done – not so grotesque as to be silly, but detailed enough to fit with the line. And the Skeletor head is the best. Apparently it’s based on the comic books (but not the mini-comics? I’m not sure) and it features a brighter, more garish face than we’re used to. 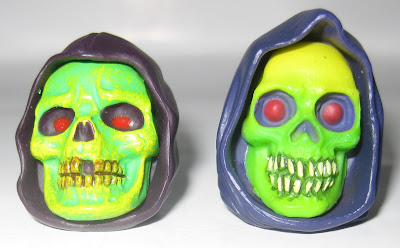 I love it. It’s the Dario Argento Skeletor head. 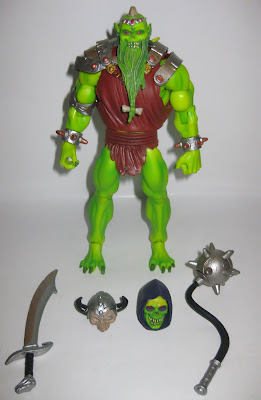 Accessories: Demo Man comes with the two extra heads, a morning star, and a ball-and-chain flail. Mattel calls it a mace, but that is incorrect unless the bendy part between the handle and the spiked ball is meant to be a solid piece and not a tether of some sort.
Both weapons look awesome and feature very nice paint apps. I think I would have preferred it if the flail had an actual link chain, but the solid piece does make it seem a bit otherworldly and different. Demo Man’s sword matches his clothing and armor in that it looks like it was just pulled out of the ground after eons of use. 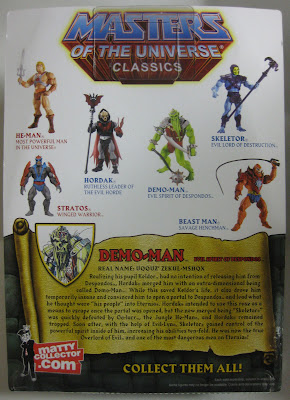 Packaging: Apparently Matty thinned out the material the cardback is made of. I can’t tell. Of course, I didn’t notice the different in the mailer box that everybody got so upset over, either. Maybe if I was a MOC collector I would care. Either way, the packaging still looks neat and enhances the large look of the figures. 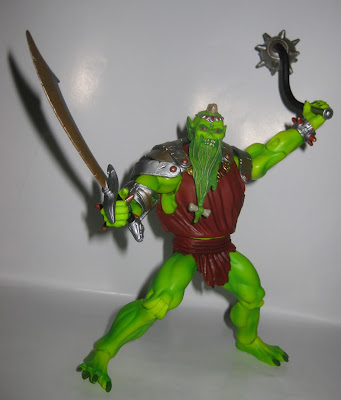 Overall: Guys, seriously – Demo Man is magnificent. This is why I keep subscribing to the line. Because even when it’s a character that I have never heard of, the Horsemen can take it and make it something really special and awesome. I honestly think this guy would have made a much better 30th Anniversary figure than Draego Man or Spector. I still don’t quite get why they are celebrating the 30th Anniversary with characters that have zero history with the franchise. Other than Photog, I mean. He at least makes sense from a certain point of view, in that he is a milestone not only in the Masters of the Universe history, but in toy history.

If you want Demo Man – and you should – you’re probably going to pay somewhat of a premium. Not only is he a figure that Matty “has no plans to reissue” (yeah – we’ll see about that), but he is also one that people might want multiples of for head displaying purposes. I bet this one isn’t going to be as easy to come by as, say, Sy-Klone. BigBad has him and I’m sure eBay does too.
Posted by Phantom Troublemaker at 11:00:00 AM